Japan has said it wants to take the lead in any G7 statement on Hong Kong amid heightened tensions and fresh protests in the city, where China plans to impose a national security law ostensibly banning subversion and foreign interference.

"Obviously, we acknowledge the G7 has a mission to lead the global public opinion, and Japan wants to take a lead in issuing a statement based on 'one nation, two systems' in Hong Kong," Japanese Prime Minister Shinzo Abe told parliament on Wednesday.

The comment came as Hong Kong police said they had arrested 53 people during protests on Tuesday evening, when hundreds of activists took to the streets, at times blocking roads in the heart of the city, before police fired pepper spray to disperse crowds.

The demonstrations were called to mark the one-year anniversary of a million-strong march through central Hong Kong. That protest, against a bill proposing extraditions to mainland China, grew into a pro-democracy movement and sparked seven months of protests against Beijing's rule.

Police said on Wednesday that 36 males and 17 females were arrested for offences including unlawful assembly and disorderly conduct. Protesters had defied a ban on gatherings of more than eight people introduced by the Hong Kong government to prevent the spread of the coronavirus.

"Lawful protests are always respected, but unlawful acts are to be rejected. Please stop breaking the law," police said in a tweet. 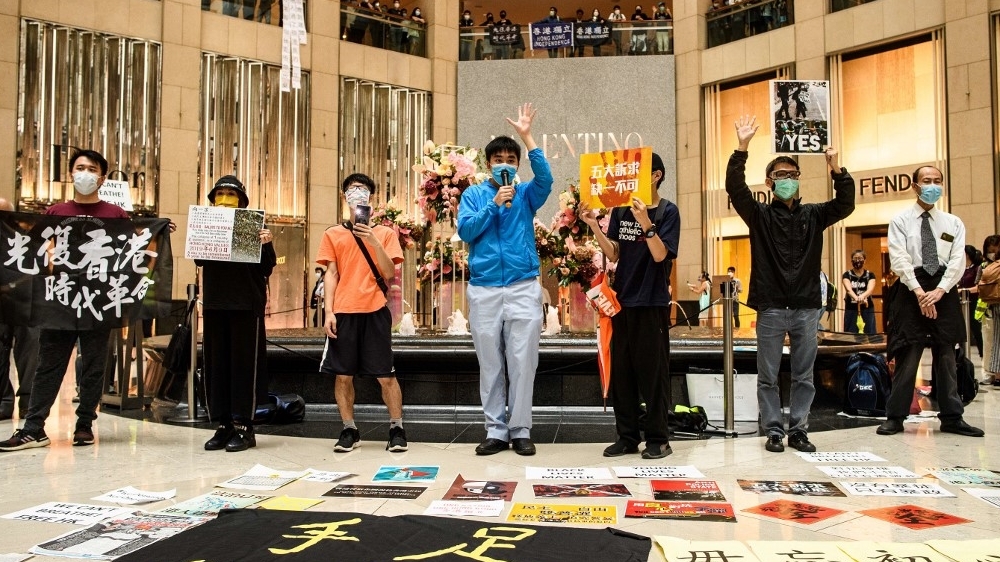 People attend a "Lunch With You" rally inside a shopping mall in the Central district of Hong Kong on June 9, 2020 [Anthony Wallace /AFP]

More protests are planned in coming days, with pro-democracy supporters fearing the proposed national security legislation will stifle freedoms in the city.

While details of the security law or how it will operate have yet to be revealed, authorities in Beijing and Hong Kong have said there is no cause for concern and the legislation will target a minority of "troublemakers".

But critics say the law would destroy the civil liberties Hong Kong residents enjoy under the "one country, two systems" agreement put in place when the United Kingdom handed the territory back to China in 1997. The agreement is set to end in 2047.

Japan had already issued a statement independently expressing serious concern about Beijing's move on May 28, the day China approved the decision, and called in the Chinese ambassador to convey its view.

The United States, Britain, Australia and Canada also condemned the move, with Washington saying it would revoke Hong Kong's special trading status granted under a 1992 law on the condition that the city retains key freedoms and autonomy.

With US-China frictions rising, Japan is in a sensitive position as it plans for a state visit by Chinese President Xi Jinping, originally set for April but postponed over the coronavirus pandemic.

China blames the protests in part on foreign intervention and is rushing to enact the national security law aimed at curbing secessionist and subversive activities in Hong Kong.

Hong Kong's problems are a result of the opposition and foreign allies "attempting to turn Hong Kong into an independent or semi-independent political entity and a pawn to contain China's development," Zhang Xiaoming, deputy director of the Chinese Cabinet's Hong Kong and Macao Affairs Office, said in a speech posted on the office's website on Monday.

"The more the bottom line of national security is consolidated, the greater the space will be for Hong Kong to leverage its advantages under 'one country, two systems,'" Zhang said.

China will "unswervingly" protect its sovereignty and block any outside interference in Hong Kong's affairs, he said.

Hong Kong Security Secretary John Lee told the South China Morning Post in an interview published on Wednesday that local police were setting up a dedicated unit to enforce the law that would have intelligence gathering, investigation and training capabilities.

Companies including HSBC and Standard Chartered have backed the security law without knowing the details of it, drawing criticism from some investors and US and British officials.

US Secretary of State Mike Pompeo singled out HSBC on Tuesday, saying such "corporate kowtows" got little in return from Beijing and criticising the Chinese Communist Party's "coercive bullying tactics".