Former FBI Director James Comey, appearing before the US Congress on Wednesday in a politically charged hearing, defended the 2016 FBI’s “Crossfire Hurricane” investigation into links between the Trump campaign and Russia.

“This was an investigation that was appropriately predicated, and that had to be opened, and it was – in the main – conducted in the right way,” Comey told the Senate Judiciary Committee in a hearing on Wednesday.

Comey said he has “no idea what on Earth” US Attorney General William Barr means when he says the Trump-Russia investigation was unfounded.

“The notion that the attorney general believes that was an illegitimate endeavour to investigate, mystifies me,” Comey told the committee.

Comey’s appearance by video feed comes just weeks before the US presidential election as President Donald Trump and his allies continue to attack the Russia affair as a “hoax”.

The president fired Comey in May 2017, prompting the Department of Justice (DOJ) to open an independent investigation into the Trump campaign’s Russia ties under Special Counsel Robert Mueller, whose report detailed dozens of links between campaign officials and Russian operatives.

“You saw what happened with Hillary Clinton where it was a whole big con job,” President Trump said in Tuesday night’s presidential debate with Democrat Joe Biden, citing new, but questionable Russian information released by his administration’s top spy official on Tuesday.

According to the letter, US officials had information from Russian intelligence in 2016 that Clinton, then the Democratic presidential candidate, had approved “a proposal from one of her foreign policy advisors to vilify Donald Trump by stirring up a scandal claiming interference by Russian security services”.

Democrats said the letter conveyed Russian disinformation. Ratcliffe acknowledged that American intelligence agencies do “not know the accuracy of this allegation or the extent to which the Russian intelligence analysis may reflect exaggeration or fabrication”.

Comey dismissed it in his testimony. “I don’t understand Mr Ratcliffe’s letter well enough to comment on it. It’s confusing … I really don’t know what he’s doing.” 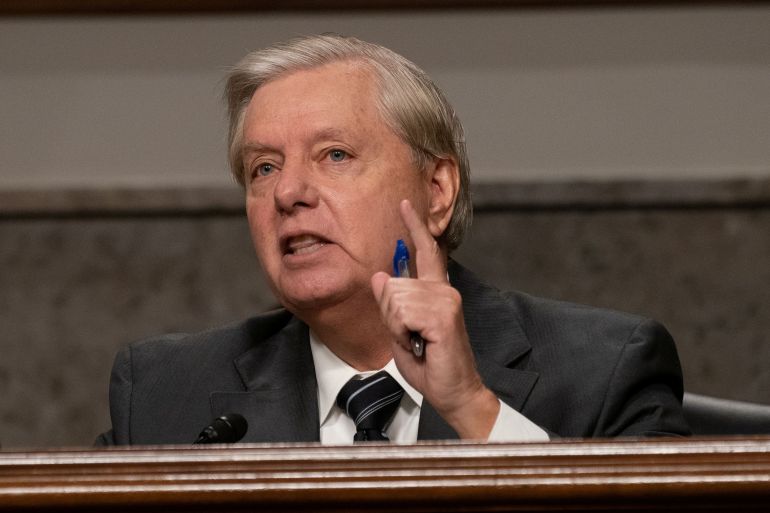 Republican legislators have seized on errors identified in an internal DOJ investigation to cast broader doubt on the Russia probe and Barr has assigned a federal prosecutor, US Attorney John Durham, to conduct a special criminal investigation.

Democrats lamented the backward-looking nature of Wednesday’s hearing and argued the Russia investigation was valid and that the committee’s time could be better spent on other matters.

“Most people think we should be talking about other things, except maybe President Trump,” said Democratic Senator Amy Klobuchar while Senator Patrick Leahy described the hearing as a “political errand” for the president, The Associated Press news agency reported.

Comey is the latest high-profile, former DOJ or FBI official to testify to the Senate Judiciary Committee.

He acknowledged “concerning” and “embarrassing” problems in the handling of surveillance applications detailed in an exhaustive 2019 report by the DOJ inspector general (IG).

“I’m not looking to shirk responsibility,” Comey said. “I was the director.”

A former FBI lawyer has pleaded guilty to altering an email related to surveillance of former Trump campaign adviser Carter Page as part of Durham’s continuing investigation into the Russia probe.

Under questioning by Republicans, Comey said that, if he had known what he knows today, he would not have approved the surveillance of Page. But he discounted the relevance of the Page surveillance to the investigation.

“The overall investigation was very important. The Page slice of it? Much less so” Comey said.

The DOJ inspector general did not find evidence of partisan bias in the initiation of the FBI investigation and concluded that the investigation was opened for a legitimate reason.

Former head of the CIA John Brennan said in a tweet the Republicans were distorting the record.

I am so looking forward to the day when Graham, Trump, & the rest of their ilk are no longer associated with the U.S. Government.

The FBI, however, did not reveal to the surveillance court that a key source for Christopher Steele, the former British spy who compiled a dossier on Trump and Russia, had disavowed in an interview with the FBI information that was attributed to him.

The IG report and documents released in recent months have raised questions about the reliability of some of the information produced in the dossier by Steele, a former head of the Russia desk for the United Kingdom’s MI6 intelligence service.

The FBI relied on that document “over and over and over” even though it was “fundamentally unsound,” Graham said.

“What do we do – we just say that was bad, that’s the way it goes? Does anybody get fired? Does anybody go to jail?” Graham said, before turning to Democratic colleagues and saying, “If it happened to us, it can happen to you.”

What happens when the US federal govt shuts down?