James Bond, Back To The Future and Star Wars memorabilia in £5.5m movie props auction

Movie memorabilia worth an estimated £5.5m is set to be sold at an auction next month.

A three-day online auction will take place between November 9 and 11, with fans being able to place bids on items on the Prop Store website or by phone.

There will also be a preview of more than 120 lots at Prop Store's office in Rickmansworth, Hertfordshire, between October 12 and November 11.

Some of the pieces for sale include items from classic films, such as Russell Crowe's helmet from Gladiator.

A Mattel hoverboard from Back to the Future Part II signed by Michael J Fox, who played Marty McFly in the film trilogy, will also be up for grabs in the auction. Image: A Mattel hoverboard from the 1989 film Back to the Future: Part II is set to be part of the collection up for grabs 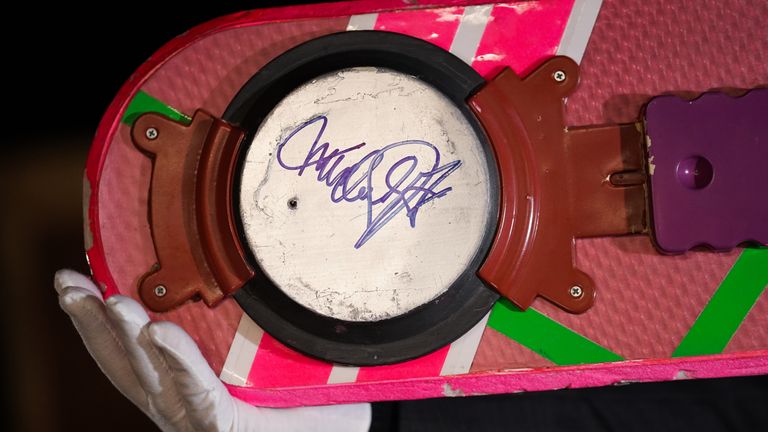 Image: The hover board was signed by Michael J Fox, who played the lead character of Marty McFly in Back To The Future II

Stephen Lane, Prop Store chief executive, said: "After our second hugely successful Los Angeles Entertainment Memorabilia live auction in the summer making over £5.1 million, Prop Store is back again, bigger and better than ever with a superb collection of over 1,000 lots up for sale."

Other memorabilia will include a light-up X-wing filming miniature from 1983's Star Wars: Return of the Jedi. Image: Stephen Lane, Prop Store's chief executive, holds up the light-up X-wing filming miniature from Star Wars: Return of the Jedi, ahead of the auction 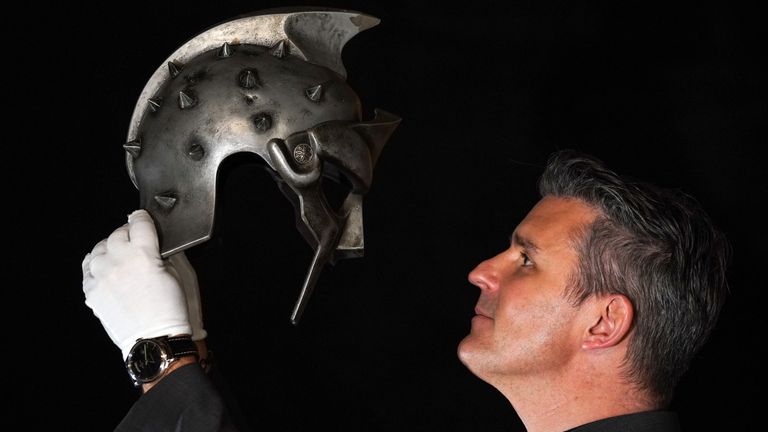 A suit worn by the late Sean Connery during his role as James Bond in You Only Live Twice could go for more than £40,000.

A shirt worn by Harrison Ford when he played the character Rick Deckard in Blade Runner has been valued at the same price too.

Meanwhile, Maximus Decimus Meridius's helmet from Sir Ridley Scott's 2000 film Gladiator is expected to fetch between £30,000 and £50,000 at the auction.