Millions of people in Ivory Coast on Saturday will cast ballots in a high-stakes election that, until recently, many had hoped would help usher in a new generation of leaders.

Instead, due to a series of both expected and unexpected events, voters have witnessed the rerun of an old – and increasingly tense – political drama.

Once again, the key figures in the polls are all familiar names, part of the continuous making-and-breaking of alliances that has shaped politics in the country for decades. 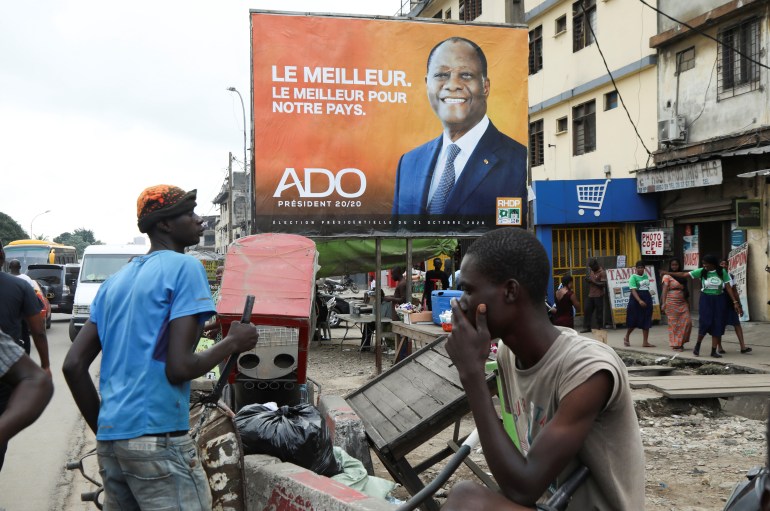 Alassane Ouattara is running for a contested third term [Luc Gnago/Reuters]In March, Ouattara ended months of speculation regarding whether he would join the league of “third termers” by announcing that Prime Minister Amadou Gon Coulibaly was his chosen successor.

But on July 8, Coulibaly passed away unexpectedly. His death plunged the country into uncertainty, leading to mounting speculation over who would replace him as the flagbearer for the governing Rally of Houphouetists for Democracy and Peace (RDHP) party.

One month later, Ouattara formally announced that he would accept his party’s nomination and run for a controversial third term, describing the decision as a “response to the call of citizens” and a “sacrifice”.

The president says constitutional amendments introduced in 2016 effectively reset the countdown clock on the two-term limit and allow him to run again.

But the opposition and critics insist the move is unconstitutional. The president’s main challengers – Bedie and Affi N’Guessan, have called for a civil disobedience campaign and a boycott of the electoral process, which they allege is rigged in favour of Ouattara. The opposition leaders, however, have yet to announce they are pulling out of the race.

‘People returning to their villages’

Saturday’s polls are seen as a major test of stability in a country still recovering from months of post-election violence in 2010 and 2011 that killed some 3,000 people.

Over the past 10 years, Ouattara has received many plaudits for the country’s economic successes, including managing skyrocketing growth rates in what is the world’s top cocoa producer and a major finance hub in West Africa. Critics, however, say the economic gains have not been fairly distributed and accuse Ouattara of veering towards authoritarianism.

The opposition has long accused the electoral commission of bias, and there have also been complaints that voter registration has been a costly and time-consuming process for many. As of October 25, the commission said only 41.5 percent of registered voters had collected their voter identification cards.

In mid-September, the council barred 40 aspirant candidates from participating in the polls, including former rebel leader and Prime Minister Guillaume Soro and former President Laurent Gbagbo.

Currently in exile in France, Soro was disqualified after being sentenced to 20 years’ imprisonment in absentia for alleged embezzlement and money laundering. A former ally of the president, Soro recently described his candidacy as “irrevocable” and said there would be no election on October 31, urging other opposition members to “block Ouattara’s candidature”.

Gbagbo, meanwhile, is currently based in Belgium as he awaits the outcome of an appeal against his acquittal by the International Criminal Court on charges of crimes against humanity. His candidacy was rejected due to a 20-year prison sentence in absentia handed down by a court in Ivory Coast in a separate embezzlement case.

In 2010, Gbagbo’s refusal to concede defeat after the electoral commission declared Ouattara the winner of a delayed election led to a brief civil war that saw both sides accused of committing atrocities.

Ten years on, with the memories of the post-election violence still fresh and grievances over the failed efforts at reconciliation and justice coming to the fore, many survivors fear a repeat.

“Some are returning to their villages out of fear and have withdrawn from engaging in any debate regarding the poll,” said Abraham Kouassi, an Abidjan-based journalist who covered the 2010-2011 post-election violence trials. “The atmosphere is tense, people are concerned that the government will enforce an even tougher crackdown after the ballot takes place.”

Already, inter-communal violence has been on the rise in the wake of Ouattara’s announcement that he planned to seek re-election. Some 30 people have been killed so far in pre-election clashes in a number of towns including Daoukro, Divo and Dabou. Many more have been wounded and dozens of others arrested.

Earlier this month, Affi N’Guessan said his home in Bongouanou was burned down during clashes that reportedly also left two people dead. 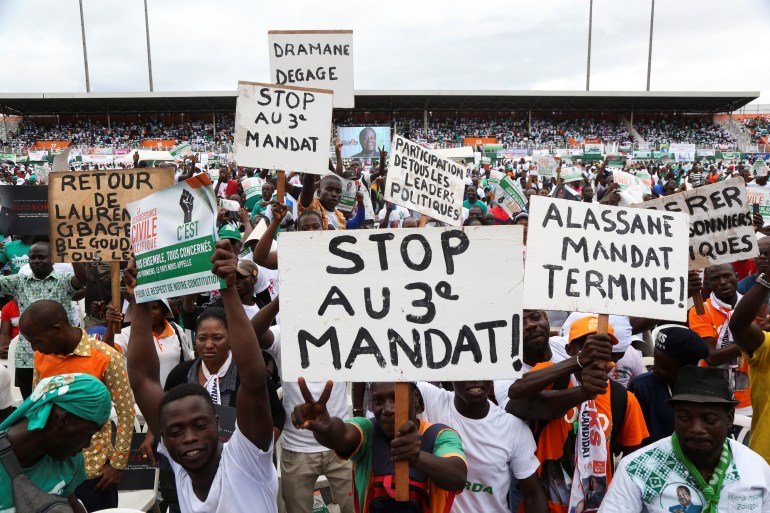 Opposition supporters protest against Ouattara’s bid for a third term at a stadium rally in Abidjan [Macline Hien/Reuters]Last week, United Nations Secretary-General Antonio Guterres expressed concerns over the recent unrest and called on sides to “reject the use of hate speech and the incitement of violence along ethnopolitical lines”.

Despite the rising tensions, some observers say they do not anticipate an escalation to the chaos that engulfed the country 10 years ago.

“Some baseline unrest has always been on the cards,” said Eurasia Group Associate Tochi Eni-Kalu. “However our view is that a repeat of the 2011 crisis is unlikely because the major drivers of the conflict then, included the presence of several well-armed paramilitary groups and dissent within the armed forces, which do not feature in the current context.”

This week, a delegation from the 15-member Economic Community of West African States (ECOWAS) regional bloc arrived in Ivory Coast and urged the opposition to reconsider its stance on civil disobedience.

“ECOWAS has been seen to engage in situations where there is a clear violation of a member state’s constitution, as was the case in Mali,” said Ryan Cummings, director for political and security risk management consultancy Signal Risk, referring to the bloc’s actions in the wake of a military coup in Bamako in August.

“Otherwise, it has generally been seen to playing a limited mediatory role and is likely to do the same in Ivory Coast.”

Days before the vote, analysts concurred that the chances of the opposition calling off the boycott remain slim.

“The government has clearly failed to reassure the opposition and civil society that the elections will be subject to independent oversight,” said Eni-Kalu.

Meanwhile, Cummings pointed out that that a number of disbarred candidates are in support of the boycott and so would see any change of heart as betrayal, thereby “leaving Ouattara able to secure a comfortable first-round victory”.

Political analyst Nadia Nata agreed: “The boycott won’t affect Ouattara’s chances of winning – but it will affect his credibility and legitimacy particularly if opposition supporters boycott the vote and participation is low.”