Protesters have marched across the world in support of Palestinians amid the worst Israeli-Palestinian violence since the 2014 Gaza war.

At least 140 Palestinians, including 39 children, have been killed after Israel launched air attacks on Gaza earlier this week.

On Saturday, Israel targeted a refugee camp in Gaza where at least 10 Palestinians were killed.

Protests took place in major cities around the world, including Doha, London, Paris and Madrid.

Hundreds of demonstrators gathered in cities across Iraq to stand in solidarity with Palestinians.

The demonstrators waved Palestinian flags and banners across five provinces in rallies called for by influential cleric Muqtada al-Sadr. Protesters gathered in the Iraqi capital Baghdad and the southern provinces of Babylon, Dhi Qar, Diwanieh and Basra in a show of support. 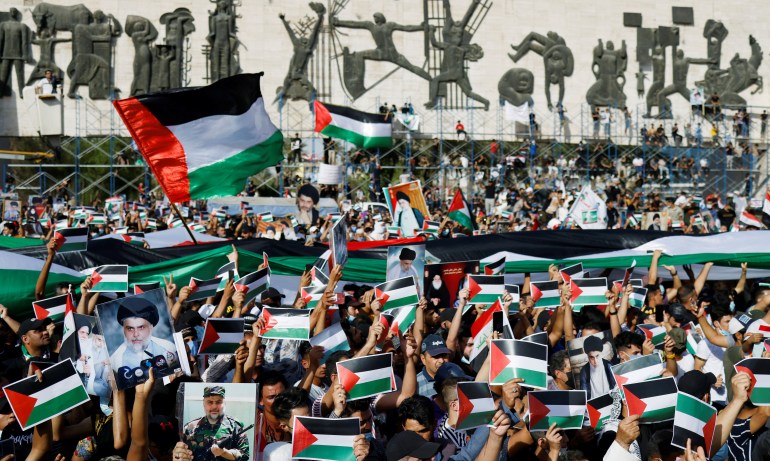 Iraqi demonstrators wave Palestinian flags during a protest to express solidarity with the Palestinian people amid a flare-up of Israeli-Palestinian violence, in Baghdad [Thaier al-Sudani/Reuters] Qatar

In Doha, thousands waved flags and displayed messages in solidarity with the Palestinians.

“I am taking a stand against the genocide perpetrated by Israel in our country. We will do whatever it takes to free our country… Since we can’t be there in person, we are here at this protest today… I am very angry, very heartbroken by what is happening,”  Reem Alghoul,  a Palestinian living in Doha, told Al Jazeera. 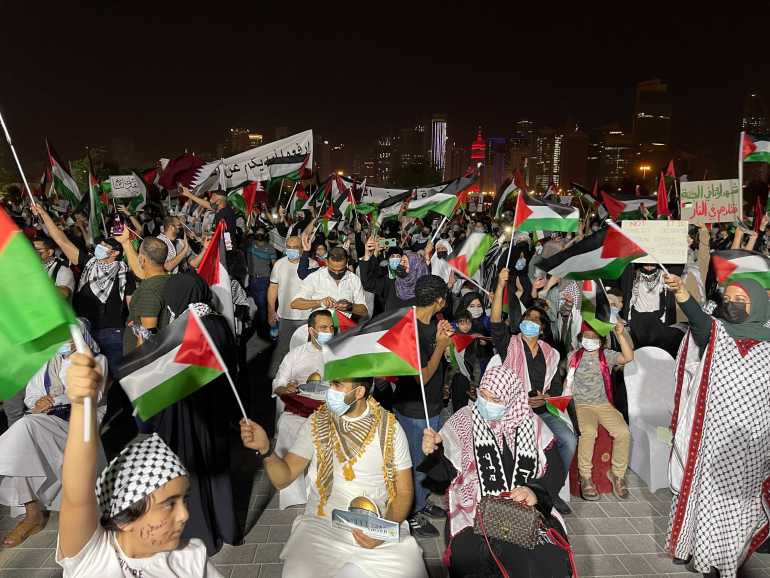 Hundreds converged in the Barbes neighbourhood in the north of Paris amid a significant security presence of some 4,200 officers.

Paris police used tear gas and water cannon to disperse the rally held despite a ban by authorities, who feared a flare-up of anti-Semitic violence during the worst violence between Israel and Hamas in years.

A handful of garbage bins were set on fire and rocks and other projectiles were hurled towards police, but no arrests were reported. 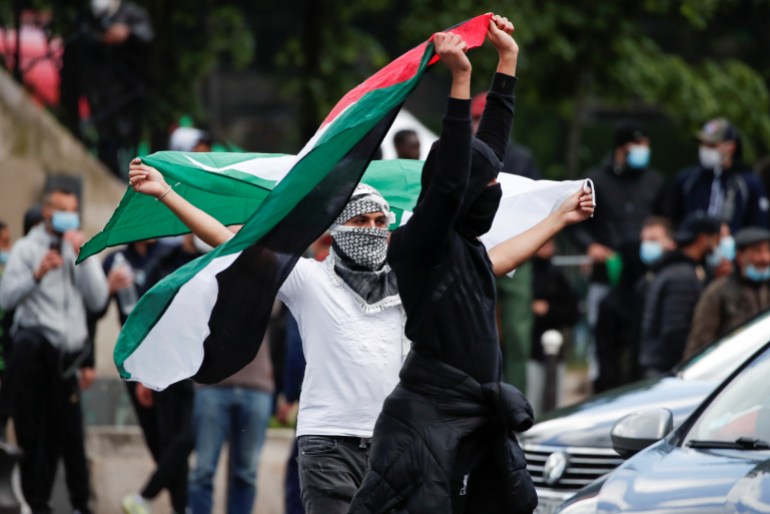 In Madrid, some 2,500 people, many of them young people wrapped in Palestinian flags, marched to the Puerta del Sol plaza in the city centre.

“This is not a war, it’s genocide,” they chanted.

“They are massacring us,” said Amira Sheikh-Ali, a 37-year-old of Palestinian origin. 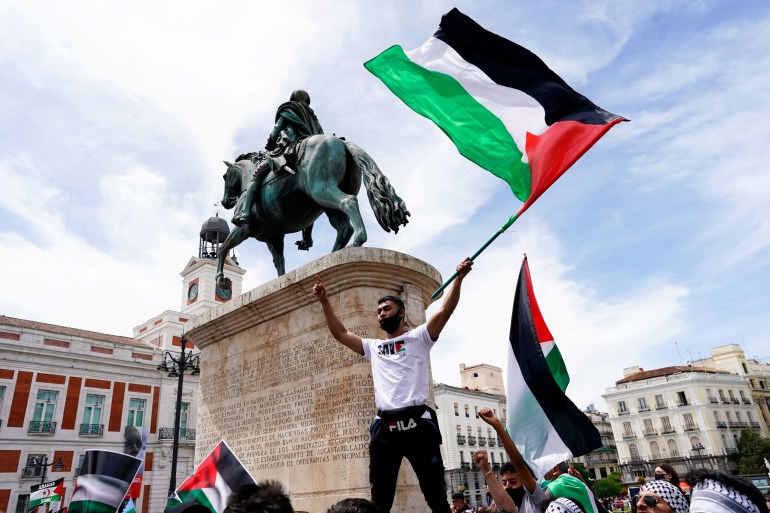 A man holds a flag during a protest in support of Palestinians amid the ongoing violence, at Puerta del Sol square, in Madrid [Juan Medina/Reuters] Lebanon

Hundreds of Lebanese and Palestinians have protested along the Lebanon-Israel border, with some climbing a border wall and triggering Israeli fire that wounded one person.

Some protesters threw Molotov cocktails and rocks over the wall during a protest on Saturday in the Lebanese border village of Odayseh, where hundreds marched waving Palestinian and Lebanese flags, as well as the yellow banners of the Hezbollah group.

Lebanese and Palestinians from around Lebanon have been heading to the border to protest against Israeli attacks on Gaza. 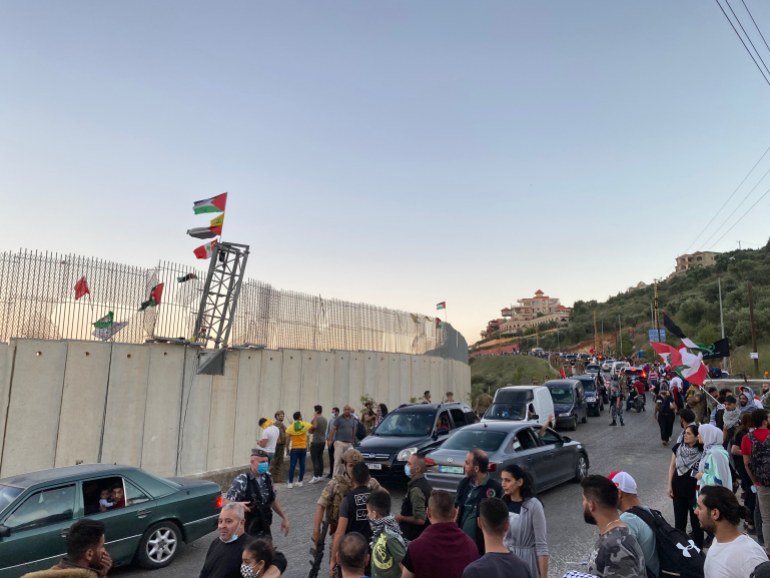 In Indian-administered Kashmir, police cracked down on pro-Palestine protesters and detained at least 20 of them.

A number of people carrying Palestinian flags took to the streets in the main city of Srinagar after Friday prayers.

The police said it “wouldn’t allow cynical encashments of public anger to trigger violence, lawlessness and disorder on Kashmir streets”.

“How can we be silent when they [Israel] are killing children in Gaza. Every human on earth should stand up for them. This is about showing humanity and solidarity, but we are not even able to do that due to fear,” a 25-year-old resident of Srinagar told Al Jazeera.

My friend, the brilliant Kashmir artist Mudasir Gul has been charged under PSA (Public Safety Act) by Indian govt for drawing art work in support of Palestine.#freemudasirgul#freedomofspeech#indiahttps://t.co/mkx9YhkUy7 pic.twitter.com/jlqiSN2R2D

Packed crowds stretched along Kensington High Street where the embassy is located.

Organisers claimed as many as 100,000 people had gathered for the demonstration through London; the police said it was unable to confirm any figure. 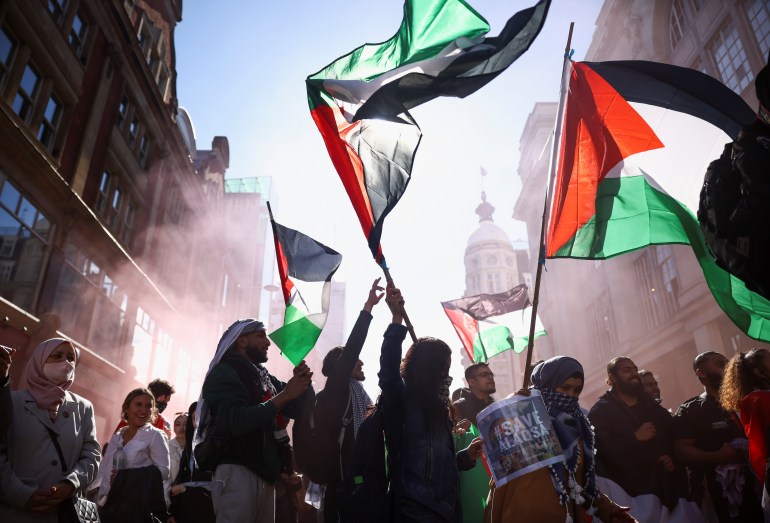 Thousands marched in Berlin and other German cities following a call by the Samidoun Palestinian Prisoner Solidarity Network.

Three marches were authorised in Berlin’s Neuköln district, home to large numbers of people with Turkish and Arabic roots.

The protesters shouted “Boycott Israel” and threw stones and bottles at the police, leading to several arrests. Other protests were held in Frankfurt, Leipzig and Hamburg. 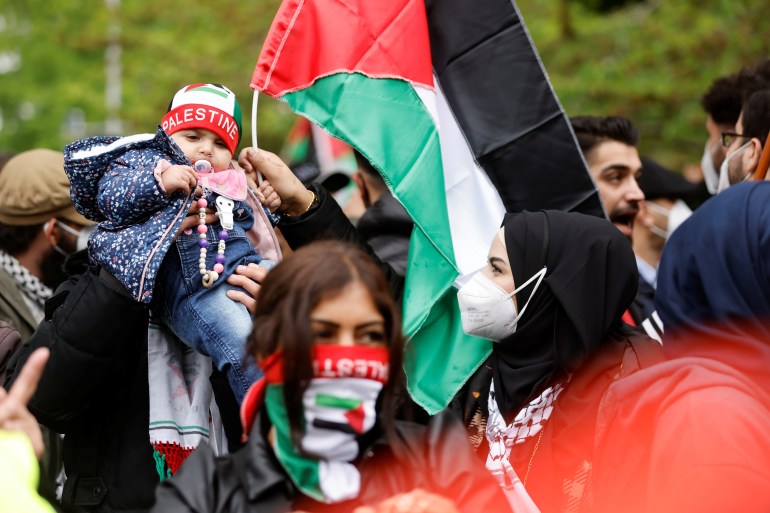 People take part in a protest in support of Palestinians, in Berlin on Friday [Axel Schmidt/Reuters]With additional reporting by Rifat Fareed in Srinagar, Showkat Shafi in Doha and Kareem Chehayeb in Odayseh 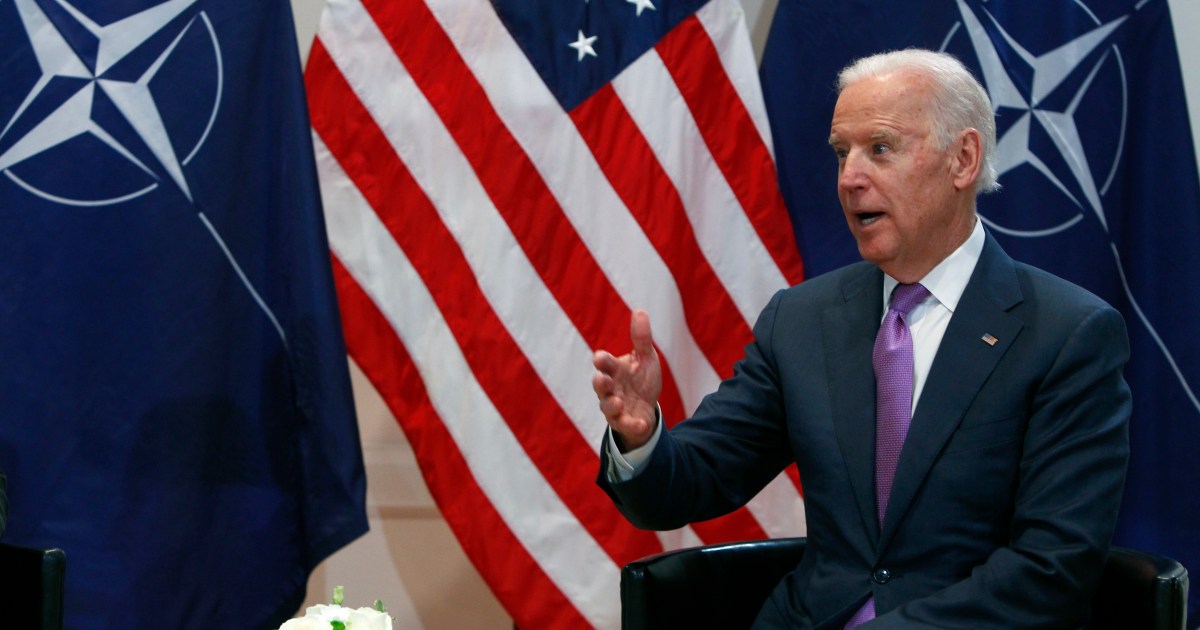 US and NATO: Manufacturing a new cold war? 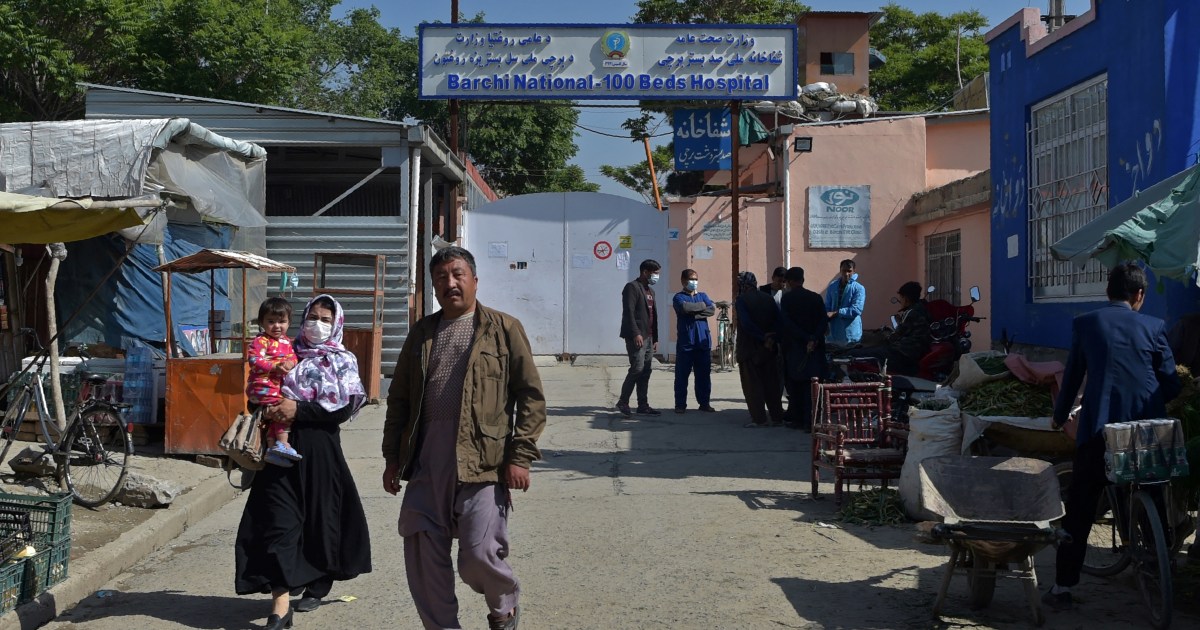 Kabul neighbourhood, home to Hazaras, stunned by wave of attacks