It's BJP Vs DMK In Next Tamil Nadu Assembly Elections, Says VP Duraisamy 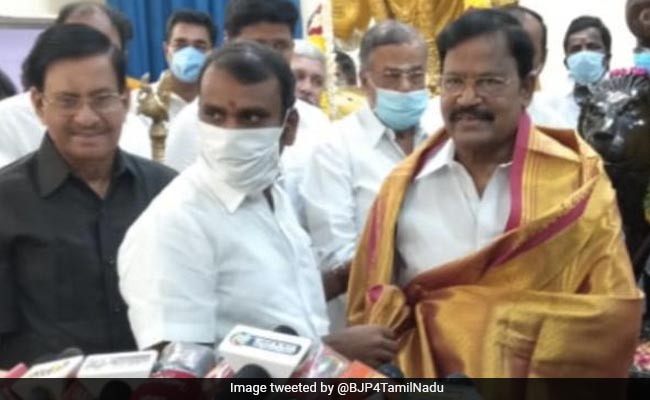 The BJP's growth in Tamil Nadu has altered the political landscape in the state and the 2021 Assembly elections will be a fight between it and DMK, under a BJP-led alliance, BJP's state vice president VP Duraisamy claimed on Wednesday.

Also, being a national party, the BJP has the right to lead the alliance in 2021 Assembly polls, he said.

However, the ruling AIADMK, with whose alliance the BJP faced the 2019 Lok Sabha elections, sought to make light of Mr Duraisamy's statement, saying it would respond to the matter only if the BJP's state leadership endorsed them.

"The BJP has grown spectacularly in Tamil Nadu. Earlier it was AIADMK (now ruling party) versus the DMK. Now after the Ku Ka Selvam (episode), it has become BJP versus DMK in the next Assembly elections," Mr Duraisamy told reporters.

Selvam, the DMK MLA from the city's Thousand Lights constituency and apparently leaning towards the BJP, had met its party chief JP Nadda in Delhi last week and also visited BJP's state head office, even as he was suspended from the Dravidian party.

He had wanted DMK chief MK Stalin to sever the party's ties with the Congress, besides demanding the party president to criticise a YouTube group that had denigrated "Kanda Sashti Kavacham" a Tamil hymn sung in praise of Lord Murugan.

Asked about the alliance, Mr Duraisamy said "all like-minded parties would be part of the alliance. Our alliance will surely win the elections and form the government."

When asked which party would lead the alliance, Mr Duraisamy shot back, "the BJP, of course."

"Being a national party, the BJP has the right to lead the alliance in the coming Assembly elections in the state. But this is my personal view. The party leadership will take a decision on the alliance," Mr Duraisamy, himself a former DMK leader who joined the party in May, added.

Responding to Mr Duraisamy, the AIADMK hinted that such statements would carry weight only if it was made by the BJP state unit president L Murugan.

"Murugan is the state BJP chief. Anyone can make any opinion in a democratic set up. Whether it is the party view, let him (Murugan) clarify. We will respond then," he told reporters when asked about Mr Duraisamy's remarks.