Is There a Gender Divide in Mask-Wearing?

Last Friday night I sat on the stoop outside my building enjoying the warm weather and a glass of wine. To my left, a couple approached, his hand wrapped confidently around hers as they walked step in step down the block. As my eyes scanned up I noted white fabric covering her nose, mouth, and chin. Mere inches away, her boyfriend’s face stood bare except for a light stubble, mouth grinning wide as he spotted the dog sitting at my feet. Before finishing my glass of wine, I saw three more couples where only the woman had bothered to put on a mask.

If you’ve suspected there are more women wearing masks than men, you’re correct. According to a recent study, men are less likely to wear face masks than women despite being more vulnerable to coronavirus. In New York City, where coronavirus has killed more than 17,000 people, men are dying of COVID-19 at twice the rate women are. Yet, walking around, it’s hard not to wonder if they’re living in an alternate universe where having a Y chromosome makes you invincible to disease.

In the past few weeks, there’s been great writing done about why men aren’t wearing masks. It’s emasculating (aka e-MASK-ulating), it shows weakness, it’s unmanly to cower to a disease that’s already killed more than 100,000 people in this country alone. A couple of weeks ago, the actress Rosie Perez joined Governor Andrew Cuomo and the comedian Chris Rock to announce a new PSA program encouraging young people to get tested for COVID-19 and to wear masks. Perez called out the young men she said she was seeing in her Brooklyn neighborhood going mask-less. “I see hipsters and yuppies walking around without a mask,” the actress said. “What is it, arrogance? Do you think you’re not going to be affected? Okay, fine, but you’re affecting me too. That I really do not understand.”

Of course, you don’t have to have a Ph.D. in gender studies to hypothesize that when the leader of the free world refuses to wear a mask as a misguided sign of strength, others might follow suit. (As Jared Kushner apparently does, even though his wife, Ivanka Trump, and their children regularly do wear masks.) And while it’s baffling enough to wonder why any able adult would choose not to take this simple action during a global pandemic, it’s even more perplexing why someone wouldn’t wear one when their partner chooses to do so.

First, there’s the rather obvious health factor at play. According to the CDC, “The virus that causes COVID-19 is thought to spread mainly from person to person, mainly through respiratory droplets produced when an infected person coughs or sneezes. These droplets can land in the mouths or noses of people who are nearby or possibly be inhaled into the lungs.”

Suppose you’re that couple walking down my block last Friday night. A woman passing by you lets out a cough, spewing virus-infected droplets in your direction. Would both members of the couple, one wearing a mask one not, become infected in that moment?

Not necessarily. “Wearing a [fabric] mask is not to protect the individual wearing the mask from getting the virus, it’s to protect everyone else from getting the virus from you,” Dr. Susan Pincus, a family medicine doctor in New York City told me. “The one with the mask is only slightly protected...maybe 20%.” I also spoke with Dr. Stephanie Sterling, chief of infectious diseases at NYU Langone Hospital Brooklyn, who confirmed that while non-mask-wearers have “an increased risk of contracting [coronavirus]...the purpose of the mask is to prevent [you] from spreading to someone else.”

Still, even 20% risk-reduction is vitally important to protect the person you’re romantically cohabitating with. “If we’re talking about a couple then definitely you’re going to be in the same space sharing saliva,” pointed out Dr. Sterling. This isn’t the friend you go on semi-distant walks with outside once a week. “If one person within that [couple] gets infected, the likelihood of the other person getting infected is very high.”

Before judging every mask-free boyfriend, Dr. Sterling points out “there are certain situations where someone shouldn’t wear a mask, if someone has underlying respiratory problems...or intense anxiety,” but was quick to note that “not all men in these relationships have claustrophobia or asthma, so that’s clearly not what’s going on.”

Dr. Pincus had harsh words for those who refuse to wear fabric masks or other face coverings, especially when their partners ask them to do so. “They are showing you they don’t care about you, because you shouldn’t be around other people not wearing masks,” she told me. “If you see a couple walking down the street...and one is wearing the mask and one isn’t, it’s just that one person is more socially responsible than the other person.”

Beyond the physical health risks, real mental health implications can arise from major disagreements within a relationship, especially amid already high tensions. Let’s face it, arguing about masks day after day while stuck quarantining together isn’t anyone’s idea of a picnic, but this is a serious issue for many right now.

“Working with couples during the pandemic, I’ve found that disagreements concerning distancing and safety are coming up often,” Ellen Yom, LCSW, a psychotherapist in Brooklyn practicing couples therapy told me. “A disagreement where one partner does not wear a mask and the other does can result in emotional distance, and one or both partners feeling misunderstood or not heard. The mask wearer can feel dismissed and helpless leading to feelings of anxiety, hopelessness, sadness and/or anger.”

Yom recommends couples with differing opinions on mask-wearing “discuss these differences and negotiate a plan collaboratively for when and where to wear masks.” But what happens when those negotiations fail?

“The mask issue wasn’t the main thing that caused our breakup but it did contribute,” Colleen from Illinois confessed to me over Twitter DMs. She continued, “The pandemic, and the way he handled it, made me examine parts of his personality that I had previously ignored...He wasn’t willing to be mildly inconvenienced for the good of others...it made me question whether I wanted someone like that in my life for the long run.”

For those living with preexisting conditions, this can be even harder. “My husband refused to wear one even though I am chronically ill and at risk—the only reason he would give is that he didn’t want to,” a woman in Indiana who asked to remain anonymous told me. “I was seriously considering divorce just because of how selfish that is. I have gone from feeling hurt and betrayed to angry and now I’m just irritated. At the end of the day I love him but I do feel stupid when we go to the store and I have a mask on and he doesn’t.”

At least some ultimatums have worked in getting men to comply. “My husband put up a fight and said he was going to get COVID-19 anyway so it didn’t matter whether or not he wore a mask,” a woman named Lauren told me over Twitter. “I said that was great, but I had no intentions of getting ill and if he was going to put my health at risk he could find another home to sleep in. I also said he was being selfish by not protecting others around him in public spaces. It was harsh, but let’s be honest, people are not taking this seriously enough.”

For single people, pandemic-behavior could become another romantic litmus-test, like who someone voted for in the 2016 election. First date questions might include: Did you wear a mask? When did you start social distancing? Did you donate to your local food bank? Perhaps mask-selfies will be the new liberal virtue-signaling on dating apps, like a photo with Elizabeth Warren was in 2019.

“It’s not an STD, but there’s a similar thought process for me of I know where I’ve been, I know the risks I’ve taken—I don’t necessarily know the risks you’ve taken,” Dr. Sterling explained. It’s hard to believe that people were making out in bars just a few months ago, and there are real health concerns for the future of dating. In my eyes, someone committed to wearing a mask is more likely to be committed to social distancing in general.

When speaking to both men and women for this piece, the most common argument made in favor of wearing a mask was one of respect—both for one’s partner and for our larger society.

“I could never be in a relationship with someone who could wear a mask but chooses not to. It shows a fundamental disrespect for the health and welfare of others and that’s not my kink,” a woman named Madeline Ann told me. Sarah from Michigan added that “Couples have the right to have opposing views, but this is a basic respect not only for the general public but for your partner...it’s selfish and a blatant disregard for human life when wearing a mask is such a simple thing we actually can do to try and reduce the spread.”

For women in relationships, this mutual respect can be a determining factor in whether the relationship survives this pandemic. “[I’m] so glad my boyfriend wears a mask” Allison from Boston told me. “If he didn’t wear his mask, it’d be a huge indicator that we didn’t share the same values and respect for others I thought we had.”

I’m rarely in favor of judging a book by its cover, but in these high-stakes times one could argue that not wearing a mask can tell you more than just someone’s thoughts on the coronavirus pandemic. Your mask-free partner holding your hand as you walk down the street is telling you who they are. Listen.

Vogue Editors Share Which Boots They’ll Be Sporting This Season 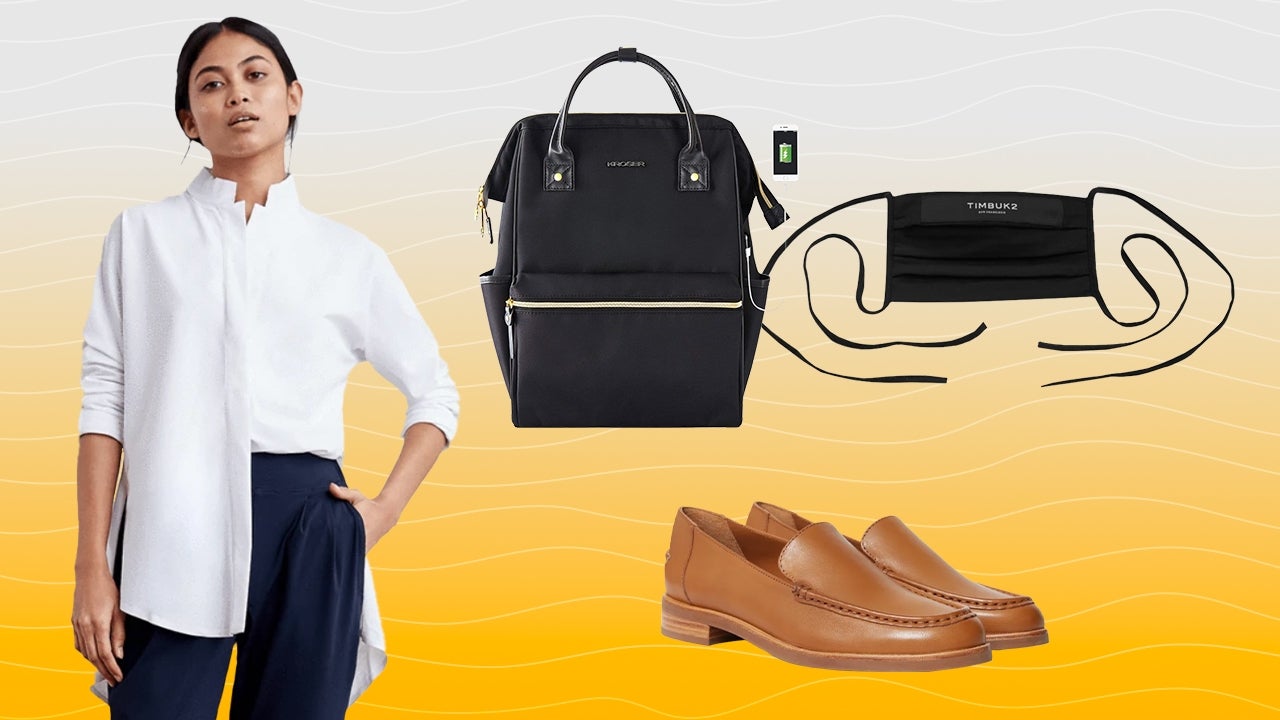 Inside the Historic Season Opening of the Metropolitan Opera

Great Escapes U.S.A. Highlights the Most Spectacular Hotels in America