An Indonesian court is expected to deliver a verdict on Wednesday in the high-profile trial of seven West Papuans accused of treason, in a case that has drawn concern about deteriorating political freedoms in the world's third-largest democracy.

The seven men face between five and 17 years in prison if found guilty of treason, after they joined anti-racism protests that swept across Indonesia's easternmost provinces last August.

According to reports and social media posts, the verdict will be delivered online through the video app, Zoom.

The demonstrations were sparked by alleged racist attacks on several Papuan students on the island of Java, including being called "monkeys".

The defendants deny the charges.

Among the accused are Buchtar Tabuni, a senior figure in a pro-Papuan independence group, the United Liberation Movement for West Papua (ULMWP), Agus Kossay and Stevanus Itlay from the National Committee for West Papua (KNPB) and several Papuan university students.

They were arrested in West Papua's provincial capital Jayapura last year and moved to Balikpapan on Indonesian Borneo for security reasons.

Many Indonesians have criticised the country's Attorney General for prosecuting the defendants, also known as the "Balikpapan Seven".

More than 150 Papuan politicians, civic and religious leaders, including members of parliament and the senate, have signed a petition asking President Joko Widodo to drop the charges against them.

But in an interview with Al Jazeera, Andreas Harsono, the group's representative in Indonesia, said that he was "afraid" the judge would convict the defendants and sentence them to jail.

"It may be not as extreme as the prosecutors have demanded, but still there are going to be prison sentences, because it is very common. Those treason articles have been used against Papuans for more than five decades in Indonesia."

The resource-rich provinces of Papua and West Papua came under Indonesian rule after a controversial 1969 referendum sanctioned by the United Nations - a process that was viewed as rigged by many native Papuans.

A low-level separatist rebellion has simmered ever since in the former Dutch colony - which shares New Guinea island with the independent nation of Papua New Guinea.

The majority of Papuans are Christian and ethnic Melanesian with few cultural ties to the rest of Muslim-majority Indonesia.

The tensions spilled over in August 2019, with several areas in West Papua erupting into fiery protests that left several dead, prompting the government of President Joko Widodo to deploy thousands of military troops to the area. The final death toll in the months-long unrest remains unknown. 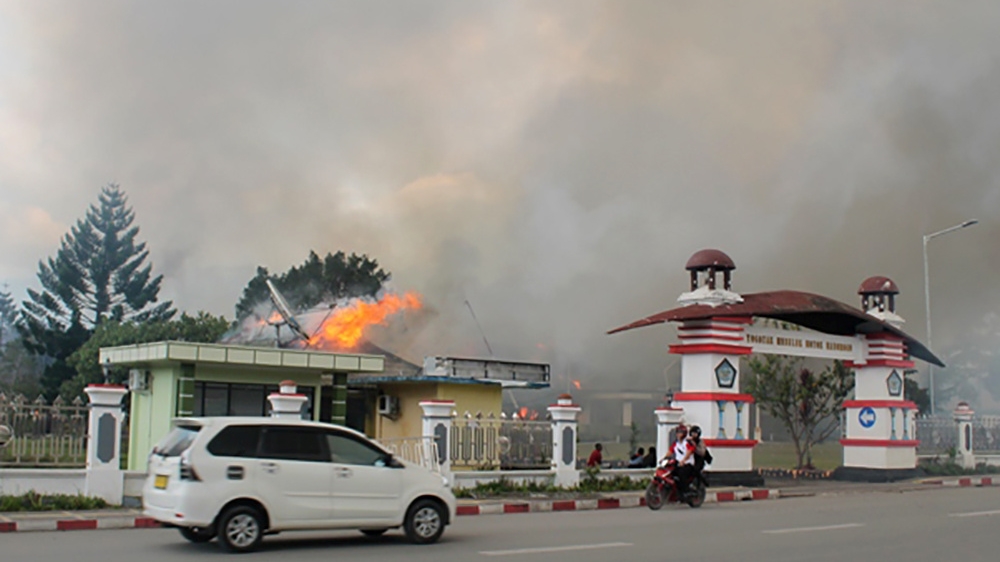 Thousands of people were forced to evacuate after deadly protests erupted in the Papua region in 2019 [File: Marius Wonyewun/Antara Foto via Reuters]

At the height of the protests, thousands of residents were forced to flee the region, the poorest in the archipelago.

During the protests, many demonstrators were seen flying the Morning Star flag, a symbol of Papuan independence, which is banned in Indonesia.

Independence figure Filep Karma was convicted of treason after raising the flag publicly and spent 11 years in jail before his release in 2015.

The Balikpapan trial has drawn unusual levels of support in Indonesia, where it has coincided with the Black Lives Matter movement in the United States.

That has inspired a local adaptation - Papuan Lives Matter - which Indonesians have used on social media and in street demonstrations calling for the Papuans' release.

The global movement has also sparked online forums about perceived racism and discrimination in Indonesia, events that activists say have been subject to obstruction and intimidation.

"Indonesian authorities should recognise that given the global attention to the Black Lives Matter movement, sending peaceful activists to prison will only bring more international attention to human rights concerns in Papua."