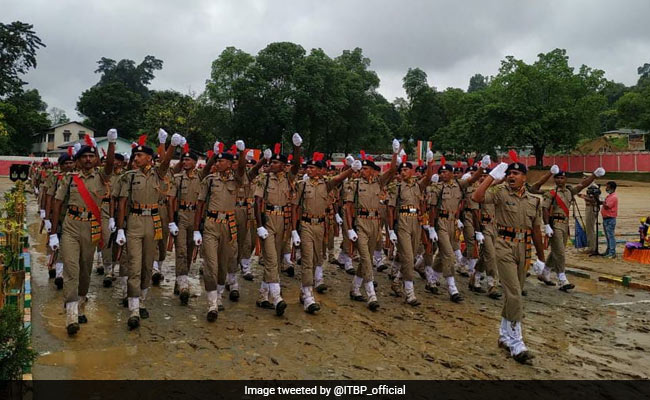 The Indo-Tibetan Border Police, which guards the LAC with China, has decided to launch the first-ever "couples fitness course" for its officers and their spouses as part of a unique project to create fitness-oriented infrastructure across its countrywide campuses.

The initiative is the brainchild of ITBP Director General (DG) S S Deswal and is being replicated in the Border Security Force (BSF) too as he is also heading the about 2.5 lakh personnel-strong force tasked to guard Indian fronts with Pakistan and Bangladesh.

The two forces are also working on a ''belly-less 2020'' plan to ensure that cases of fat and obese officers and troops are checked and these vital paramilitary forces are combat fit.

The ITBP, raised in the aftermath of the 1962 Chinese aggression, is about 90,000 personnel in strength and is trained for mountain-warfare along the 3,488 km long Line of Actual Control (LAC) with China.

Deswal told PTI that a week-long ''couples fitness course'' will soon be launched at the ITBP officers academy in Uttarakhand's popular hill station of Mussoorie.

"Spouse is the life-long partner and their good health is important for a person to lead a happy and cheerful life, especially after retirement when the body ages."

"As our officers remain aloof from their families for long, the health issues of their better halves sometimes gets overlooked," the DG said.

Hence, he said, we have decided to run a fitness training programme for the officer and their spouse and it will be launched soon in batches.

The fitness course for spouses, largely wives, will be a bit lighter than what will be imparted to their husbands, he said.

Such programmes will be conducted for jawans as well in a phased manner, he said.

On the ''belly-less'' mission, the DG said, "We have conducted multiple fitness programmes for commanders in the Deputy Inspector General (DIG) and below ranks in these forces and more will be conducted."

A senior officer said Deswal himself attended the closing ceremony of at least four such courses in the recent past and also participated in the ''42 km in 7 hours walk'' exercise.

Early this year, the 58-year-old Indian Police Service (IPS) officer finished a 100-km speed march from Bikaner to Jodhpur in Rajasthan to spread the message of ''Fit India'' and has continued with these outdoor activities.

The 1984-batch Haryana cadre officer is a walking and fitness enthusiast.

The DG said he has also constituted a team of officers in these forces to create infrastructure keeping in mind two things: fitness of the force and families of troops.

We will have more family-oriented infrastructure in our camps so that troops and officers can host their families for a certain period, Deswal said.

For bringing in a fitness regime, we are creating ''open gyms'' in our camps where exercise equipment are placed and rooted under the open sky and multi-purpose walkways are being laid that can be used by the troops and their families for walking, running and cycling, he said.

"We have large campuses, many spread in an area of about 70-80 acres, and multi-purpose tracks all around their periphery so that they can not only be used for patrolling by camp security personnel but by others for jogging and fitness runs," Mr Deswal said.

We want to ensure that our officers, jawans and their families are happy so that they are motivated to render the job of keeping intact the internal security grid of the country, he said.

Deswal was also asked about the ongoing COVID-19 situation in these two large forces, his decision to take up the creation of country''s first-ever quarantine centre at the ITBP camp in Delhi and ordering the movement of troops to join their units after the lockdown.

"I am not a fair-weather friend of the country but a foul-weather friend. I have to be the first when it comes to undertaking difficult tasks when a disaster of this scale strikes, that is the pandemic of coronavirus," he said.

The DG said he was initially doubted for taking up the task of setting up the 1,000-bed ITBP quarantine centre in Chhawla area of south-west Delhi as this could lead to cases of infection in the force but his team of doctors, paramedics and sanitation workers have done an "excellent job" by treating and discharging about 1,200 people including 42 foreigners who were brought to India on special evacuation flights from Wuhan in China, and Italy after the COVID-19 outbreak a few months back.

It's a small contribution by the ITBP in the COVID-19 battle, he said.

The DG said the COVID-19 recoveries in these two forces are more than active cases now and there is no cause of concern.

The two forces, as per the latest data, have reported at least 795 coronavirus cases out of which 649 have recovered. There have been four coronavirus-related deaths in these forces.

Lokpal gets 55 complaints between April and Sept this fiscal, three against MPs