Leaders of the farmers’ unions in India have condemned the violence during a “tractor rally” held by farmers in the Indian capital to demand repeal of new agricultural laws.

On Tuesday, tens of thousands of farmers began the day in a convoy of tractors festooned with Indian and religious flags along New Delhi’s outskirts as the country celebrated its Republic Day.

But hundreds of protesters – some on horseback – broke away from approved routes, heading for government buildings in the city centre where the annual Republic Day parade of troops and military hardware was taking place. 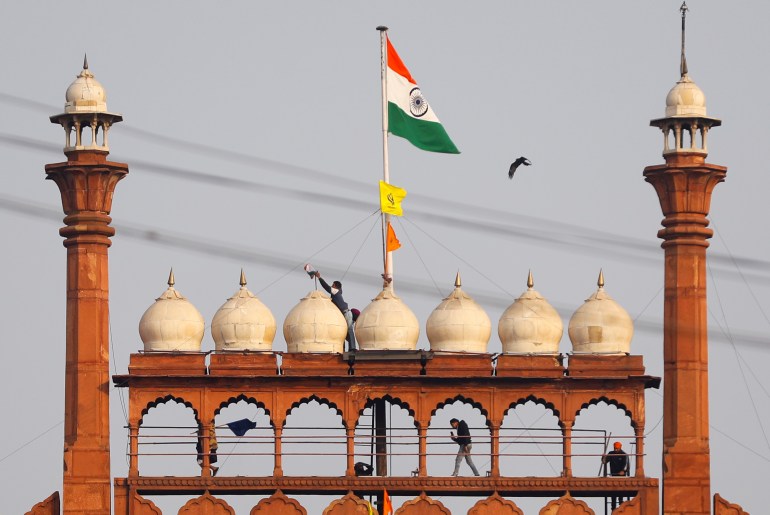 Once inside, they put up their own emblem on the flagpole where the prime minister normally gives an independence day speech in August.

One farmer was killed in what police said was an accident after his tractor overturned after hitting a barricade.

At least 86 police officers were injured, an official statement said.

Police said they had started nearly two dozen cases for “rioting” and “assault with deadly weapons” in connection with the violence and accused those who diverged from the agreed routes of “violence and destruction”.

“They have caused great damage to public property and many police personnel have also been injured,” a police statement said.

#PeacefulProtestContinues
Is the hashtag for today
Lets use it, share it & viral it, so that our farmers' voices reach the government and actions are taken further. pic.twitter.com/6K1zEMsdNn

Protest organiser Samyukt Kisan Morcha later on Tuesday said the groups deviating from set routes did not represent the majority of farmers.

“We also condemn and regret the undesirable and unacceptable events that have taken place today and dissociate ourselves from those indulging in such acts,” the group of farm unions said in a statement.

The farmers’ leaders said the police had provoked them into violence.

“When you attack a peaceful protest, then difficulties for the government will surely increase,” union leader Kawalpreet Singh Pannu told AFP news agency.

“This won’t stop here. Our movement and message have only become stronger.”

On Twitter, the hashtag #PeacefulProtestsContinue was trending in India on Wednesday. 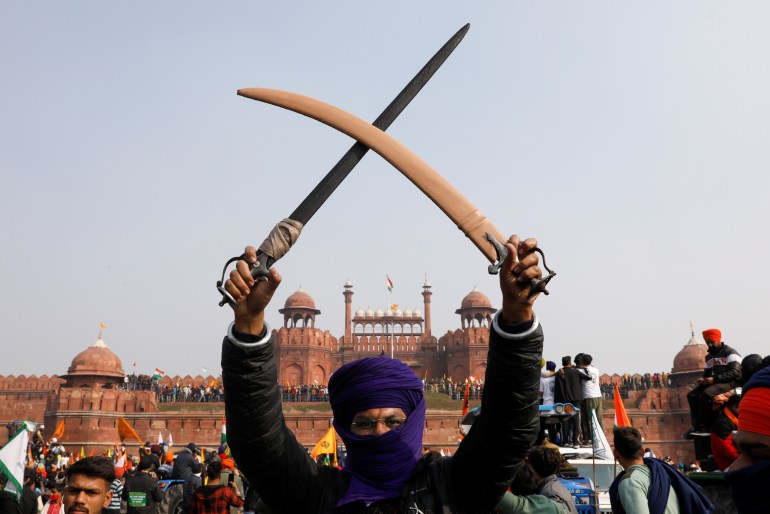 A farmer holds up swords during the protest at the Red Fort [Adnan Abidi/Reuters]Pannu said a new protest would be held on February 1 outside Parliament when the government announces its annual budget.

Leaders of the farmers’ unions say they have enough supplies to keep their protest camps going for a year if necessary.

Amarinder Singh, chief minister of Punjab state, where many of the protesters came from, called the clashes “shocking”.

“The violence by some elements is unacceptable,” he said in a tweet. “It’ll negate goodwill generated by peacefully protesting farmers.” 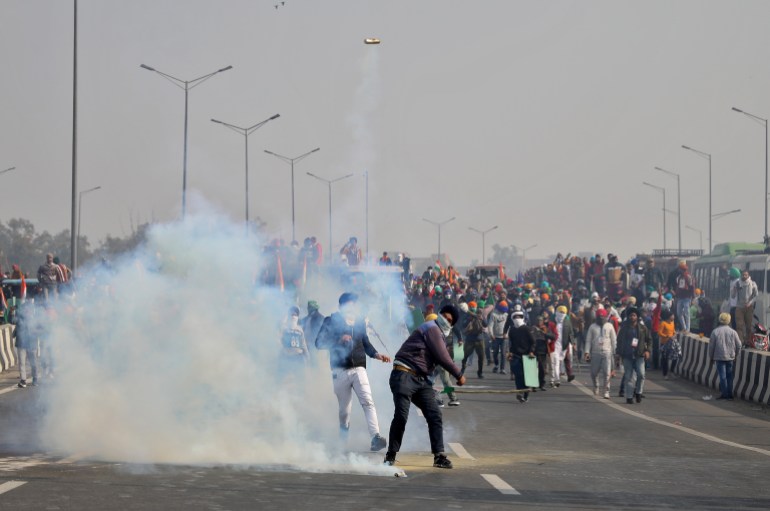 Home Affairs Minister Amit Shah held an emergency meeting on Tuesday night on the two months of protests against agricultural laws that have become the biggest challenge to the Hindu nationalist government since it came to power in 2014.

Delhi: Security tightened at Red Fort in the national capital.

A group of protestors climbed to the ramparts of the fort and unfurled flags yesterday. pic.twitter.com/ovGx9mugzS

Security was beefed up at the fort and on the edges of the city, where thousands of farmers have been camping since November.

Several metro stations in New Delhi have been shut down for a second day, while internet services in many areas were suspended.

While the government says the legislation will boost rural incomes, leaders of the farmers’ unions say the laws will give Indian conglomerates control of the agriculture industry – the bedrock of the economy – and end guaranteed prices for most farm produce.

Farmer leaders have rejected the government’s offer to suspend the implementation of the laws for 18 months.

Ten rounds of talks between farm unions and ministers have failed to break the deadlock.

Smaller farmer demonstrations were held in Mumbai and Bangalore and in the breadbasket states of Punjab and Haryana.