India’s investment bankers are set for their most rewarding year as local initial public offerings head for an all-time high despite the devastation brought about by a deadly Covid-19 wave.

Listings in Mumbai have already raised $10.2 billion this year, according to data compiled by Bloomberg. Banks steering those offerings have raked in record fees of almost 14 billion rupees ($189 million), more than double the amount they earned during the previous peak in 2017, figures provided by New Delhi-based Prime Database show.

The bumper pool of fees has become all the more significant for the bankers in an especially harrowing year. A massive surge in coronavirus infections in April and May reached the doorsteps of Mumbai’s urban affluent, a group that’s usually insulated from the country’s worst disasters. Bankers were among those who struggled to arrange oxygen tanks and intensive-care beds for loved ones, all the while juggling their workload in the midst of all the IPOs.

“There were cases of bankers who showed up for work despite a death in the immediate family,” said Nipun Goel, president of investment banking at IIFL Securities Ltd. in Mumbai. “I was shocked to see my colleague on Zoom calls. He said, ‘let’s get this done,’ as he wanted to keep his mind occupied.” 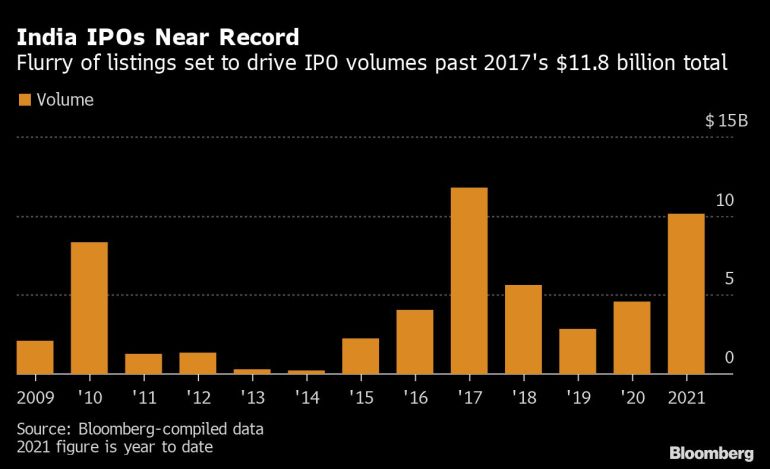 India is no exception to a global IPO frenzy in which companies ranging from technology startups to jewelers and drugmakers have raised about a record $476 billion worldwide this year. Liquidity, low interest rates and demand from retail investors are spurring firms to go public.

“We are working 24/7,” Venkataraman said. “When the market is good it is quite natural for issuers to accelerate their listing plans.”

There’s more slated for 2022. The Indian government is considering a mega IPO, selling as much as 10% of state-owned Life Insurance Corp. of India for a valuation of at least $109 billion in what would be the nation’s biggest yet. Mumbai-based generic drugmaker Macleods Pharmaceuticals Ltd. is targeting a listing next year that could raise about $1 billion, Bloomberg News reported Tuesday.

Like in other parts of the world, the pandemic has accelerated the adoption of digital platforms in India, helping shorten the process. The so-called road shows in which arrangers hop from city to city making pitches to investors are now entirely wrapped up in a matter of hours with Zoom calls, from many weeks in the past. 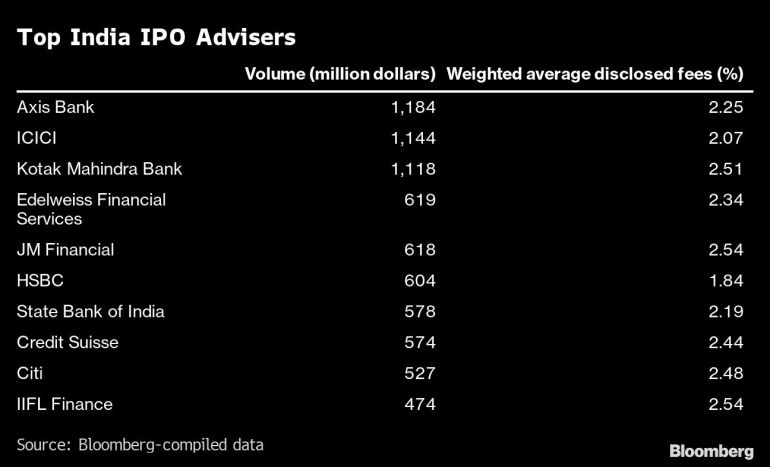 “The efficiency has improved tremendously and bankers are multitasking without travel schedules,” said Kotak Mahindra’s Venkataraman, who boarded a plane for the first time in a year in February.

Earlier, bankers used to devote less time to their families thanks to demands of constant travel, but with the lockdowns, work-from-home and other curbs, they don’t complain about that anymore, he said. Despite being at home, their loved ones still miss them because the bankers end up spending most of their time on conference calls or with their eyes glued to their computer and phone screens.

“Work-life balance for investment bankers, primarily the junior ones, has gone for a toss,” said Vijay Vaishnav, founder of Indusion Consulting Services Pvt., an executive search firm in Mumbai. “They are telling us they are sleep-deprived due to the kind of fundraising pipeline.”

To help make things easier, some financial institutions like Mumbai-based ICICI Securities Ltd. that are partially open — including during late hours — are providing transport facilities to ferry staff between office and home in the sprawling metropolis. A few are even paring back smaller IPOs to focus on larger and more lucrative issuances.

Ajay Saraf, executive director and head of investment banking at ICICI Securities, said he’s decided to manage only offerings above 10 billion rupees. “It’s crazy,” he said, referring to the rush of IPOs.

Others such as Citigroup Inc. are stepping up hiring to cope with the workload. The U.S. bank, which has had a presence in the South Asian country since 1902, said this month that it added eight new positions to its investment banking team — mostly juniors — boosting the local crew by 25% to 40.

While these bankers may not see any major change in their fixed compensations, a massive increase in their variables is on the cards as most of the arrangers have more than surpassed their annual targets, said Indusion Consulting’s Vaishnav.

“I have not seen such vibrancy and all-round buoyancy in my past 25 years,” said IIFL Securities’ Goel. “A lot of it is about the thrill and satisfaction of bringing newer stories to the market. Money is just a byproduct.”