For years, Falguni Nayar guided the founders of Indian companies through roadshows in Europe and the U.S. as they made their way to stock market debuts. Now the former investment banker is steering her own startup to an historic initial public offering.

Nykaa, her brainchild, has grown into India’s top e-commerce site for beauty products, with the endorsement of Bollywood stars and a fervent following among twenty-somethings. The startup, formally known as FSN E-Commerce Ventures Ltd., filed preliminary documents late Monday for an initial public offering, which Bloomberg News has reported could value the business at more than $4 billion.

One idea Nayar picked up from her time working with entrepreneurs was the importance of a motivating business mission. With Nykaa, she saw the opportunity to help India’s women look after themselves, moving away from the country’s traditional deference to men.

“I was inspired by those die-hard founders,” Nayar said in a recent interview over Zoom from her home in Alibaug. “Our message to women has been that the spotlight of her life should be on herself. You are important in your story and should feel no guilt at being center stage.”

The message resonated. Founded in 2012, the Mumbai-headquartered startup now offers more than 2,500 brands of everything from mascara and makeup remover to velvety kohl Indian eyeliner and the body tattoo art called mehendi. Through its websites, apps and 70-plus brick-and-mortar stores, the company hit revenue of 24.5 billion rupees ($330 million) in revenue and other income in the fiscal year ended in March, according to its filing. That figure rose by more than 35% during that period, despite pandemic-mandated store closures and delivery challenges. The startup is profitable.

If the IPO goes as planned, Nykaa will be India’s first women-led unicorn to go public. Nayar owns about half of the company with her husband and their twin children, meaning the value of their stake could exceed $2 billion if the startup reaches or surpasses initial projections.

“It was a niche waiting to be tapped and Falguni’s dived right in,” said Arvind Singhal, chairman of Technopak Advisors Pvt, a leading consulting firm. “India’s young population has rising aspirations and women across social strata are more empowered with every passing generation.”

Nayar founded the company nine years ago, figuring if she was going to start a business it had to be before she turned 50. “The point of no return,” she said.

The name she picked is derived from the ancient Sanskrit word for heroine. 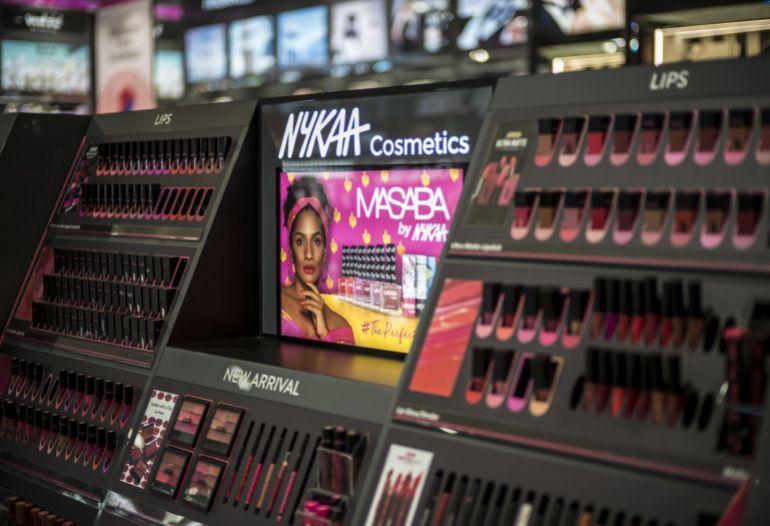 Nykaa has grown into India’s top e-commerce site for beauty products, with the endorsement of Bollywood stars and a fervent following among 20-somethings [File: Anindito Mukherjee/Bloomberg]

Nayar had seen that in the West entire floors of high-end department stores were dedicated to cosmetics and other beauty products. But millions of Indian women still had to visit dingy neighborhood “bangle” or “variety” stores for their beauty needs. These mom & pop shops, mostly staffed by male owners, stocked cosmetics and fashion jewelry alongside craft kits and other knick-knacks. Choices were limited, displays poor, and there was no chance to sample products.

Nayar’s goal was to create a slick, integrated shopping experience where consumers could shop online or in physical stores, depending on what they were looking for with that particular visit. They could visit one of Nykaa’s colorfully stocked specialty outlets to, say, try on lipsticks or eyeshadows. Online, they could get tutorials, including from celebrities like Janhvi Kapoor or Debasree Banerjee.

Nykaa resisted cutting prices to lure buyers, in contrast to other e-commerce startups.

“We didn’t want to be a discount store,” Nayar said. “We’d rather sell the right color of lipstick at full price, than the wrong shade at half off which would make the buyer unhappy within minutes of wearing.”

From 60 daily orders at launch, sales climbed to more 1,000 orders within months. Nykaa built on its momentum by customizing products for Indian skin tones, skin types and local weather. It launched an array of nail colors, now up to 2,700 shades. It also initiated shoppers to make-up basics, such as foundation, and now offers 1,500 shades. Nykaa’s own range of lipsticks have fun Indian names such as Maharani (wife of the maharaja) and Mishti (sweet person).

“They really have everything,” said Sakshi Jain, a 21-year-old who just graduated college. “I can compare prices, read extensive reviews and then buy. All my friends shop at Nykaa too.”

Bangalore college student Sayeree Nandi began browsing products on Nykaa at the start of the pandemic and has since become addicted to the app.

“It’s more convenient than going to multiple physical stores or searching on Amazon,” said the 21-year-old. She reads reviews before buying — skin care products are her weakness. 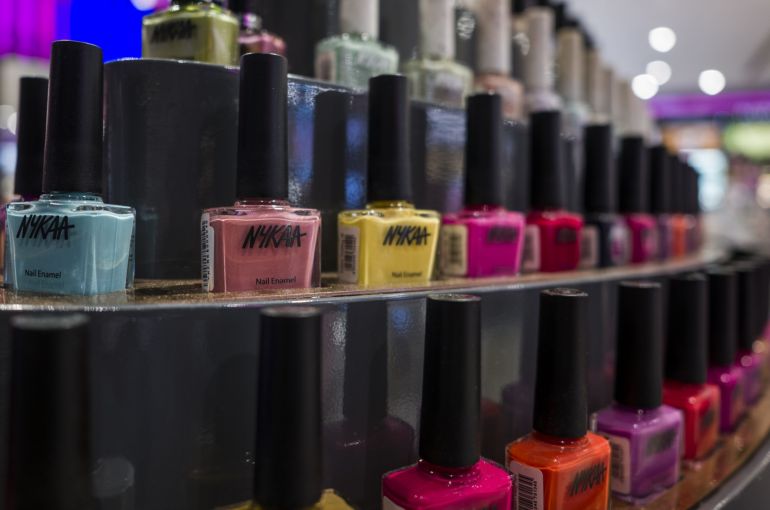 The startup now offers more than 2,500 brands of everything from mascara and makeup remover to eyeliner and henna [File: Anindito Mukherjee/Bloomberg]

Nykaa’s strategy has been to build on its lead by investing in technology, marketing and product extensions. Its online services use algorithms to recommend products based on what customers have bought before, much like Netflix Inc. recommends movies.

It’s used to size to cut exclusive tie-ups with foreign brands. Global brands such as Estee Lauder Cos. and MAC Cosmetics Inc. began to feature their products in India as the market has grown. They’ve customized products too — Estee Lauder offers tiny 7- and 20-milliliter sizes of best-sellers for the budget conscious.

Nykaa has expanded to three separate apps, including, most recently, an app for men’s products.

“At social and work gatherings, very senior, ultra-successful men were quizzing me about skin and hair care so I decided to launch Nykaa Man so men could shop without fear,” said Nayar.

Anchit, her son who graduated from Columbia University, runs the beauty e-commerce business, while daughter Adwaita, with an MBA from Harvard Business School, operates the fashion vertical. Her husband, Sanjay Nayar, is India chairman of KKR & Co.

Ravi Mehta, the London-based managing director of Steadview Capital and an early investor in Nykaa, said he thinks Nayar’s firm has a particularly strong business model among India’s internet companies.

“It’s one of the fastest-growing companies by revenues of the more than 15 startups that are lined up for IPOs,” Mehta said in a phone conversation. Steadview’s India-focused tech fund has invested in local startups, including Zomato Ltd., Policybazaar and Lenskart Solutions Pvt.

India is still a small market in the beauty world and its relatively low standard of living means those who can indulge in Nykaa products are a tiny sliver of the country’s 1.3 billion population. But the number is growing with the economy — and the societal changes that are empowering more women. Technopak estimates the beauty market will grow more than 8% annually until 2025.

India has come a long way from the time when most women shopped for just two beauty products — a red lipstick and a kajal eyeliner. Nykaa is now working to persuade them they can indulge and upgrade to hair masks and night-face serums too.

“We still have ways to go,” said Nayar.