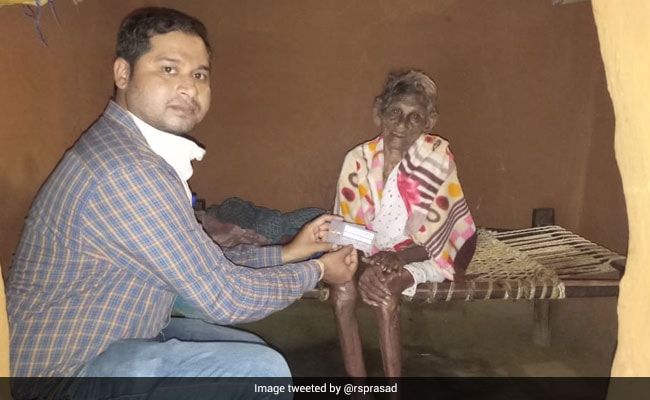 Days after an 80-year-old bedridden woman of Odishas backward Nuapada district was dragged on a cot to a bank by her elderly daughter to withdraw money from her Jan Dhan account, India Post Payments bank has come to her aid.

The woman, identified as Labhe Baghel of Bargaon village, will now be able to withdraw cash at her doorstep using Aadhaar enabled payment system with India Post Payments bank which seeks to provide house to house banking service has opened a bank account in her name.

The information about the development has been shared by Union Law Minister Ravi Shankar Prasad through a Twitter post. He expressed happiness that the India Post Payments bank has extended a helping hand to the old woman.

"Had learnt from media about difficulty faced by a very old lady in Odisha in withdrawing cash from her bank account. Happy to share that India Post Payments bank helped her by opening a bank account. Now she can withdraw cash at her doorstep using Aadhaar Enabled Payment System," Mr Prasad tweeted.

The old womans 60-year-old daughter, Punjimati Dei, had to drag a cot with her sick mother lying on it to Utkal Grameen Banks branch at Bargaon in Nuapada district around 300 metres away to withdraw money.

A video purportedly showing Punjimati Dei dragging a cot with her mother on it had sparked an outrage after it went viral. Bank officials described the incident as unfortunate and said it happened because of a communication gap.

Ms Dei had gone to the branch on June 9 to collect Rs 1,500 from her mother's Jan Dhan account, which came under the Pradhan Mantri Garib Kalyan fund to tide over the COVID-19 crisis. The Central government had in March announced Rs 500 monthly assistance for women Jan Dhan bank account holders from April to June.

Some of the villagers claimed that Ms Dei had been to the bank to withdraw money from her mother's account but the branch officials refused, saying the account holder needs to come to it personally.

When the woman said that her mother was sick and cannot visit the bank, the branch manager promised her that he will personally visit her house the next day and hand over the money to her mother, bank officials said.

Since there was heavy rush in the branch on June 9, the branch manager promised the woman that he would visit her house on June 10. But unfortunately, before the opening of the bank, the woman brought her mother to the bank pulling her on a cot. "It was a misunderstanding on the part of the daughter of the account holder," he said.

"The branch manager did not have any intention to harass anybody. But the unfortunate developments led to a communication gap resulting in display of inhuman and insensitive approach by the bank in treating senior citizens. A departmental action is being initiated against the erring official," the bank had said in a statement.