Police prevent politicians from entering a Uttar Pradesh village where a Dalit woman was allegedly raped and killed, sparking outrage.

Indian police imposed emergency laws on Thursday in a village where a Dalit woman was allegedly raped and killed, barring gatherings of more than five people after clashes erupted following her cremation.

Opposition leaders Rahul Gandhi and Priyanka Gandhi Vadra, who were on the way to Hathras district to meet the victim’s family, were detained by the police.

The 19-year-old woman, from the class formerly known as “untouchables” under India’s Hindu caste system, died from her injuries on Tuesday, having been attacked and gang raped on September 14 in a field near her home in Hathras district, 100 km (62 miles) from the capital New Delhi, authorities said.

Police have arrested four men in connection with the crime.

Clashes between protesters and police erupted in the district in the northern state of Uttar Pradesh on Wednesday after police cremated the woman’s body.

The victim’s brother told Reuters the cremation was carried out against the wishes of her family, who had wanted to perform their own funeral rites. Local officials deny this.

Twenty-five people were arrested in connection with the unrest, according to a police information report. A witness told Reuters that police wielded batons during the clashes.

India is one of the world’s most dangerous countries for women, with a rape occurring every 15 minutes, according to federal data – figures that rights groups say vastly underestimate the scale of the problem. 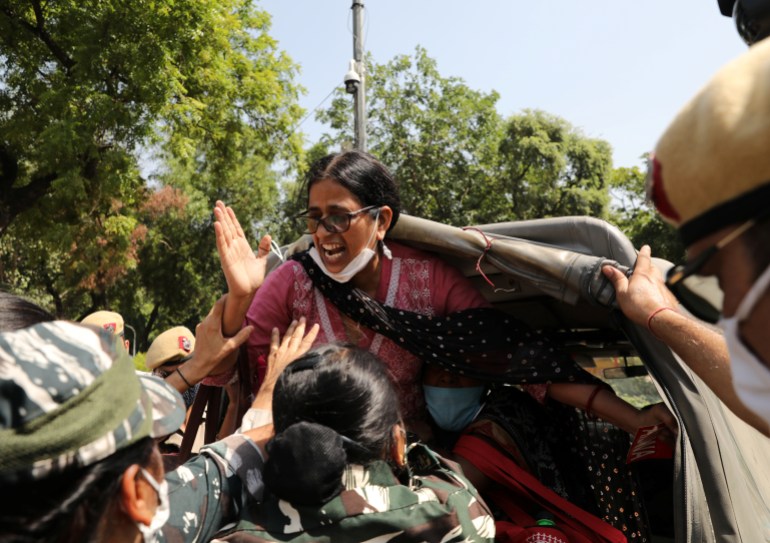 A demonstrator is arrested by police during a protest outside Uttar Pradesh’s state bhavan (building) in New Delhi, following the woman’s rape and murder [Anushree Fadnavis/Reuters]This latest case has caused widespread outrage and protests across India due to the backgrounds of those involved.

While the victim came from the Dalit community – which faces frequent discrimination and violence – the four men arrested were all from a higher caste, her brother told Reuters.

The victim and her brother are not being identified due to laws against naming victims of sexual violence.

Orders preventing the gathering of more than five people have been imposed in Hathras, Vikrant Vir, the top police official in the district, told Reuters on Thursday.

Chandrashekhar Azad, a popular Dalit politician who founded the Bhim Army to campaign for the rights of the community, also planned to visit the district on Thursday, according to media reports.

Uttar Pradesh, which is ruled by Prime Minister Narendra Modi’s Bharatiya Janata Party, ranks as one of the most unsafe states for women in the country.

Under the emergency laws, police will stop members of political organisations from entering Hathras, Vir said.

Schools must be haven for children: Kailash Satyarthi on Afghanistan and Covid impact