India-Bangladesh Inland Waterways Route To Be Operational From Tomorrow 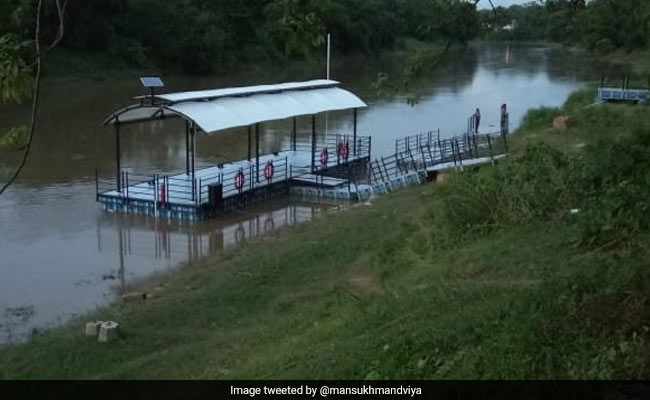 The route connects Tripura with the National Waterways of India through Bangladesh.

A trial run of an inland waterways protocol route between India and Bangladesh began on Thursday with a cargo vessel leaving for Sonamura port in Tripura from Munshiganj in the neighbouring country, Chief Minister Biplab Kumar Deb has said.

With the arrival of the vessel, the Sonamura-Daudkandi inland waterways protocol route between Tripura and Bangladesh would be made operational on Saturday.

The route connects Tripura with the National Waterways of India through Bangladesh.

The boat-sized vessel with a consignment of cement set sail for Sonamura port in Sepahijala district of the northeastern state from Munshiganj on Thursday.

The chief minister in a tweet on Thursday night said, "First Vessel with consignment started its trial run today from Munshiganj, Bangladesh for Sonamura port, Tripura. With the successful run, Indo-Bangla waterways will open up new avenues for economic development in both the countries where Tripura will play an important role".

At present, ships and steamers ply from Haldia in West Bengal to Daudkandi, which is only 80 km from Sonamura sub-division.

Union Minister for Shipping Mansukh Mandaviya will welcome the vessel carrying 50 tonnes of cement from Daudkandi in Bangladesh to Sonamura on Saturday through video conferencing from Delhi, officials said.

The inland waterways protocol route would be made operational in the presence of the chief minister and chairman of the Land Ports Authority of India (LPAI) Aditya Mishra, secretary of Tripura's Industry and Commerce Department Kiran Gitte said.

The 90-km long Sonamura-Daudkandi route, included in the list of Indo-Bangla protocol (IBP) routes in May this year, is expected to boost trade, Kiran Gitte said on Sunday.

"It is a historic day for Tripura. A total of five crew members has left for Tripura for the first trial run. The vessel is supposed to reach Tripura on Saturday. However, due to the flow of the river, the vessel will take a little longer time to reach Tripura," Mr Roy said.

A floating jetty was set up on the Gomati river on July 4 as part of the Indo-Bangla international inland waterways connectivity project.

Traders of India and Bangladesh had demanded a trial run of vessels on the Gomati river to operationalise the Indo-Bangla protocol route between Sonamura and Daukandi, officials said.

A high-level team of officials of the Bangladesh Shipping Ministry had surveyed the riverine protocol route on August 12, Sonamura sub-divisional magistrate Subrata Majumder had said.

Have Got Invitation To All-Party Meet With PM: Omar Abdullah

UP Man Arrested With Morphine Worth Rs 3 Crore