I Tried Omsom, the Asian Sauce Kits That Promise to Transform Your At-Home Cuisine

As a first-generation Vietnamese-American, I’ve struggled to bring to life the delectable cuisines I grew up eating; Vietnamese dishes that went beyond traditional pho noodle soups or banh mi sandwiches. One of my favorites as a child was a lemongrass barbecue pork dish I’d often dream about, but was only obtainable at a restaurant or during a visit to my mom’s house in SoCal. (It was never anything I could cook myself at home, either deemed ‘too complicated,’ or diminished to, ‘It would never taste as good.’) But, in May, I discovered Omsom. Pronounced “om-sòm”—which translates to noisy, rambunctious, or riotous in Vietnamese—it promises a new type of “meal kit” whose spirit lies in its bold, flavorful sauces.

Omsom’s co-founders are Vanessa and Kim Pham, two first-generation Vietnamese American sisters who sought to bring proud, loud Asian flavors into American homes that didn’t sacrifice cultural integrity, either. As the Pham sisters tell Vogue, they wished to “reclaim and celebrate Asian flavors, Asian stories, and Asian culture.” Vanessa describes walking down the “ethnic” aisle in mainstream grocery stores, where she and her sister noticed a big disconnect between the items available on shelves and who they served (and didn’t).“A lot of those products were not made with folks like us in the room. And so, that was just a fundamental cornerstone of our business since day one,” says Kim.

The sisters decided to join forces to create Omsom. Kim, brought her 10-year-long experience working with startups in venture capital while Vanessa, a graduate from Harvard, had a breadth of business-savvy experience working at Bain & Company advising Fortune 500 companies. The key to Omsom's brilliance is that it solves a simple, yet common dilemma so many first-generation Asian-Americans can relate to—trying to recreate convoluted recipes our parents used to make with little to no access to the myriad of ingredients required and a lack of knowledge and understanding on how to actually make these dishes.

For me, one of the most difficult parts of Asian cooking has always been exactly this—finding the right ingredients to bring the rich, bold Vietnamese flavors to life. The right seasonings, chilis, sauces can make for a grocery list that extends 10 items or longer. Kim similarly shares, “I would be on the phone with mom, [with] mom being like, ‘Add the right amount of fish sauce.’ And we’d be like, ‘Five teaspoons or tablespoons?’” says Kim. But here, this process is made simple in one easy-to-use sauce packet.

For Kim and Vanessa, their connection with food has been present throughout their lives. Food has “been a way that we connect with our identity and understand our culture,” says Vanessa, who in fact, recalls mentioning her favorite Vietnamese soup dish “Bun Bo Hue” (a beef and vermicelli noodle soup) in the starting line of her college essay. For many Asian families (mine included) love was conveyed through food. “Food was always a huge part of our family, but in many ways, quite unspoken. You might not say, ‘I love you,’ but you’ll put a piece of fruit [out] to apologize,” says Kim. “We've found it to be an important language, in a way, for us to reclaim what it means to share Asian culture in a way that’s undiluted,” Vanessa adds. s

For me, Omsom completely transformed my home cooking. Not only did it bring back my favorite Vietnamese dish into my home, but it also brought joy to my quarantine nights. One of the small pleasures during this time has been being able to share my Omsom dinner concoctions with my mom, who was, needless to say, impressed! The beauty in Omsom not only lies in its aromatic flavors packed inside easy-to-use kits, but the fact that customization is encouraged. Many Omsom consumers have mixed and matched different proteins and vegetables for the traditionally pork-focused Vietnamese lemongrass dish, or used tofu instead of spicy Thai larb. The difference between traditional meal kits and Omsom is that Kim and Vanessa are not looking to change or shift behaviors, but rather, to bring restaurant-quality ingredients and flavors to pantries through delightful and easy at-home cooking.

Launching during the height of the COVID-19 pandemic was a challenge at first for the Pham sisters, but they quickly noticed that “folks were reconnecting, and trying to find a sense of comfort, and a sense of nourishment and self-care through cooking and food.” Even more so, Omsom launched during a period when Asian-American representation in mainstream media has been gaining momentum, Parasite won its historic “Best Picture” Oscar, Crazy Rich Asians had unparalleled box-office success as an all-Asian cast, and even more importantly, a time when amplifying diverse voices in all industries from fashion to beauty, food to film has been more critical than before. “There’s starting to be this moment in time where the rest of the world is finally catching up and realizing that Asian-Americans are an audience that should be actively served and not overlooked. That we not only have buying power, but we have an influence on culture and how other people spend their dollars,” says Kim. “It is exactly why we built this brand. This audience deserves an intentional brand that’s going to do our damn best to do right by them. And so, that’s where we’re coming from.”

This fall, Omsom is planning to expand its offerings into the East Asian food market, with a roll-out of Korean, Chinese, and Japanese-focused starter kits. Since launching, Omsom has sold out twice, the first within 72 hours and again in June. Omsom just restocked their popular sampler pack on Monday. Hint: shop it below before it sells out again. 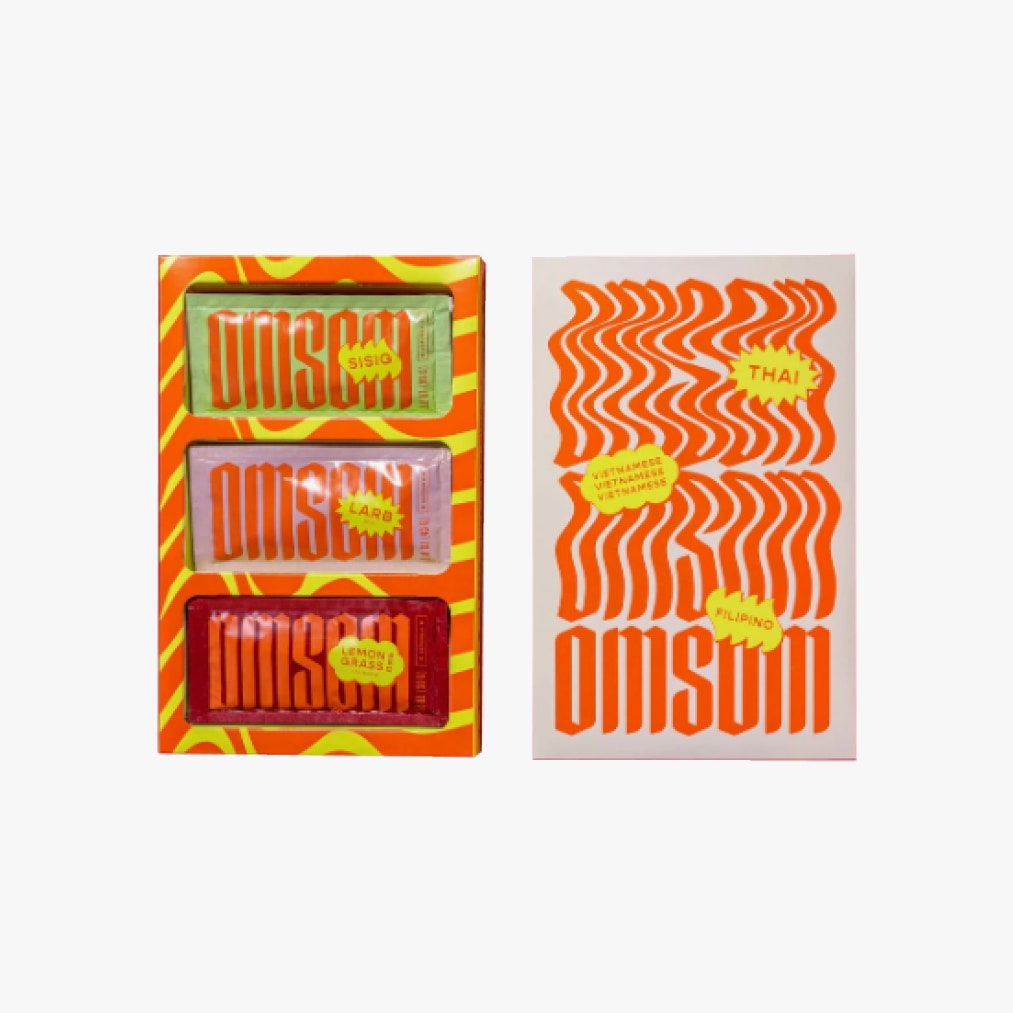