Hope for ‘momentum’ as Olympic torch relay kicks off in Japan

Tokyo, Japan – The Olympic torch relay has kicked off in Japan amid continued public opposition, a year after authorities delayed the Tokyo 2020 Summer Games due to the coronavirus pandemic.

The relay began on Thursday in northeastern Fukushima prefecture, where a powerful earthquake and tsunami in 2011 killed more than 18,000 people and triggered the world’s worst nuclear disaster since Chernobyl.

At a ceremony closed off to the public, Iwashimizu set off from the J-Village football complex in the town of Naraha with 14 other members of her team before passing the torch on to the next runner. Some 10,000 runners will now carry the flame across Japan’s 47 prefectures and the relay will end with the Olympic opening ceremony in Tokyo on July 23.

Speaking at the start of the relay, Seiko Hashimoto, the president of Tokyo 2020’s organising committee, said she hoped the Olympic flame would “light up hopes around Japan one by one”.

The flame, which was flown in from Greece in March last year, has been “kept alive quietly but powerfully as the entire world underwent a difficult period,” she said.

“The small flame did not lose hope, and just like the cherry blossom buds that are ready to bloom, it was waiting for this day.”

Olympic organisers hope the relay will soften the public mood in Japan, where most people remain firmly opposed to holding the Summer Games.

A recent poll by the Asahi newspaper showed some 69 percent of people favoured postponing or cancelling the games.

While Japan has dealt with the pandemic better than most countries – with a total of 9,000 people dying from COVID-19 since the start of the pandemic – many are worried the Olympics could help spread the virus. Organisers last week banned foreign spectators, but some 15,400 athletes and thousands of other officials are expected to enter Japan for the Games.

Shortly before the start of the relay, 60-year-old Junko Machida said she was “really embarrassed” that the authorities were going ahead with the competition.

“They should stop even thinking about the Olympics. There is no way to hold such a big event at the moment,” she said, while also expressing anger over the soaring cost of staging the Games.

With current spending estimated at $15.4bn, the Tokyo Olympics are already the most expensive Summer Games on record. The year-long delay meanwhile is expected to add a further $2.8bn to expenses.

Rumiko Hara, 45, says she has “mixed feelings” and wants organisers to delay the Olympics until 2024.

“I sympathise with the athletes,” she said from Tokyo. “But I think [the government] should not hold the Olympics this year given the risk.” 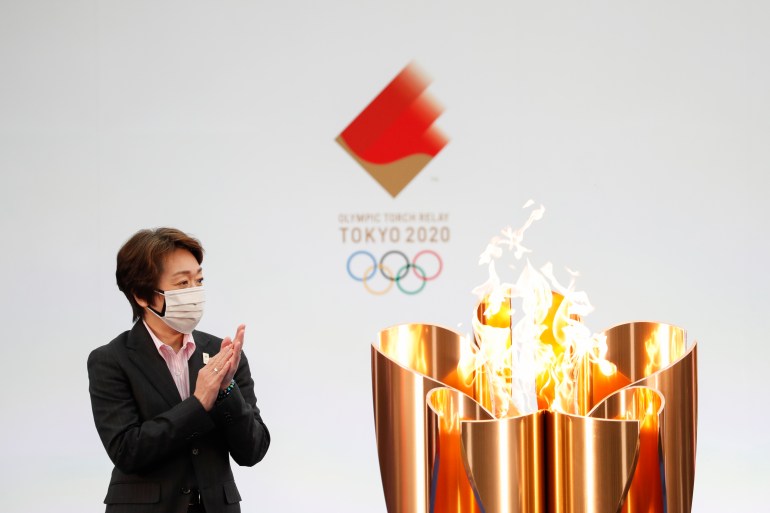 “Holding the Olympics is the best decision they could make in this situation,” she said. “But the anti-pandemic measures are not enough. Vaccines won’t be available to everyone till autumn and they should set stricter rules on accepting spectators.”

Japan has had a slow vaccine rollout, with only 700,000 people vaccinated so far. Experts say health workers, people aged above 65 and those with health risks will be vaccinated by June, but inoculating the country’s 126-million people is expected to take at least a year.

Still, some business owners say the Olympics will help revive the economy.

“I agree with the Olympics because it will bring economic benefits,” said Masaya Nagasawa, who owns a petrol station in the city of Kyoto. “I would like the government and the Olympic Committee to take all possible measures so that the Games can be held safely.”

Controversies, including the resignation of organising committee officials over sexist remarks, have also dampened enthusiasm for some.

Minami Toda, a 22-year-old student, welcomed Hashimoto’s replacement of Yoshiro Mori, who was forced out in February after complaining that female members of the Japanese Olympic Committee talked too much.

“I’m hoping there won’t be any more discrimination of any sort,” she said. “Let’s hope for the better.”

In Fukushima, officials said the torch relay showcased Japan’s recovery from the triple disaster of 2011 as well as its determination to overcome the coronavirus pandemic.

“Here in Fukushima Prefecture, we have been facing serious problems and are still recovering from 2011,” said Governor Uchibori Masao. “So the torch relay and the Games are very precious for us”.

Japanese Prime Minister Yoshihide Suga, in a statement, also welcomed the ceremonial start of the Olympics.

“The torch relay which started today is a great opportunity for the people to feel that Olympics and Paralympic games are just around the corner. I hope the momentum rises in all regions,” he said. 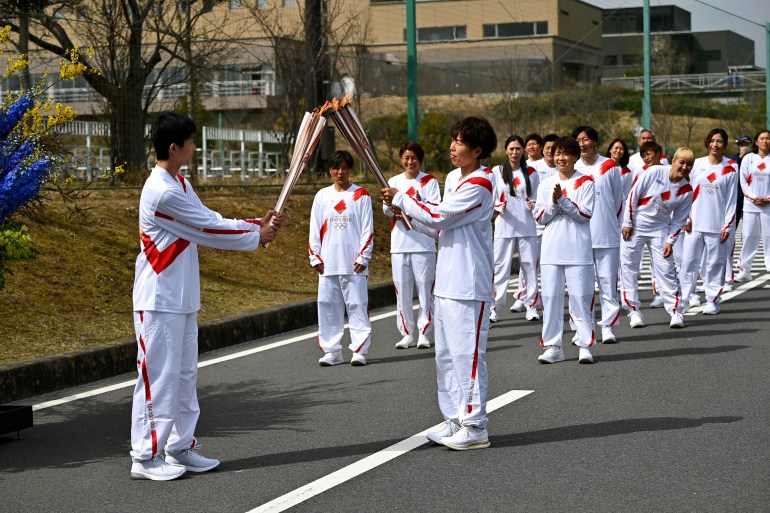 Japanese torchbearer Azusa Iwashimizu (front right), a member of the Japan women’s national football team, passes the Olympic flame to high school student Asato Owada at a torch ‘kiss point’ during the torch relay grand start at the J-Village National Training Centre in Naraha town, Fukushima Prefecture March 25, 2021 [Philip Fong/ Pool via Reuters]Suga also assured the public that the torch relay would be safe and secure. “We will thoroughly follow all the measures” recommended by the Tokyo 2020 organising committee as well as the International Olympic Committee, he said.

To watch the event live, organisers say fans must refrain from cheering loudly and avoid crowding together as the torch passes.

Mitsuo Kaku, a professor from Tohoku Medical and Pharmaceutical University, also urged people not to go see the relay if they were sick.

“Avoid crowded places,” he said in an interview broadcast on Japanese network NHK. “The torch relay will take place throughout Japan, and we need to think flexibly about how to manage and control infection region to region.”