Major changes to Hong Kong’s election laws are expected to be introduced this week as top officials gather in Beijing for the annual meeting of China’s rubber-stamp parliament.

The “Two Sessions”, as they are known in Chinese, include the largely ceremonial meeting of the Chinese People’s Political Consultative Conference which convenes on March 4, followed by the more powerful National People’s Congress, which gets under way the following day.

Delayed by COVID-19, last year’s event was held in May and saw the adoption of sweeping national security legislation for Hong Kong that was billed as necessary to “restore stability” following mass protests in 2019 but has led to a swift crackdown on the territory’s pro-democracy movement, including elected politicians, since it was imposed on June 30 last year.

On Sunday, Hong Kong charged 47 democracy activists with “subversion” for organising and taking part in an unofficial primary to help the pro-democracy camp choose its best candidates for elections to the city’s semi-democratic legislature, which were later delayed.

Media tycoon Jimmy Lai is also in custody awaiting trial on national security charges for alleged “collusion with foreign forces” while in November four pro-democracy legislators were disqualified from office and accused of “endangering national security”.

But more arrests and disqualifications are expected in the fallout from the NPC, which is expected to bring more political change in the former British colony.

“In the last year, we have seen Beijing taking advantage in part of the global distraction caused by the pandemic to settle scores on various fronts and try to punish figures who have interfered with their efforts to gradually bring Hong Kong more into line with mainland cities,” said Jeffrey Wasserstrom, a professor in Chinese history at the University of California, Irvine and the author of Vigil: Hong Kong on the Brink. 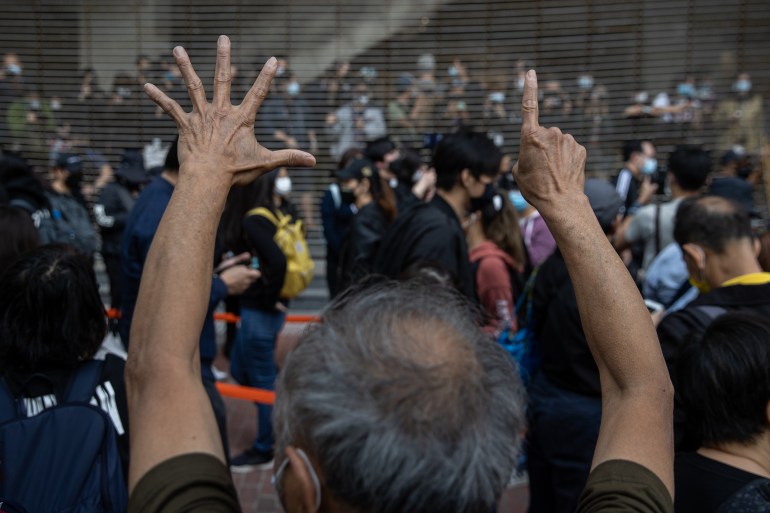 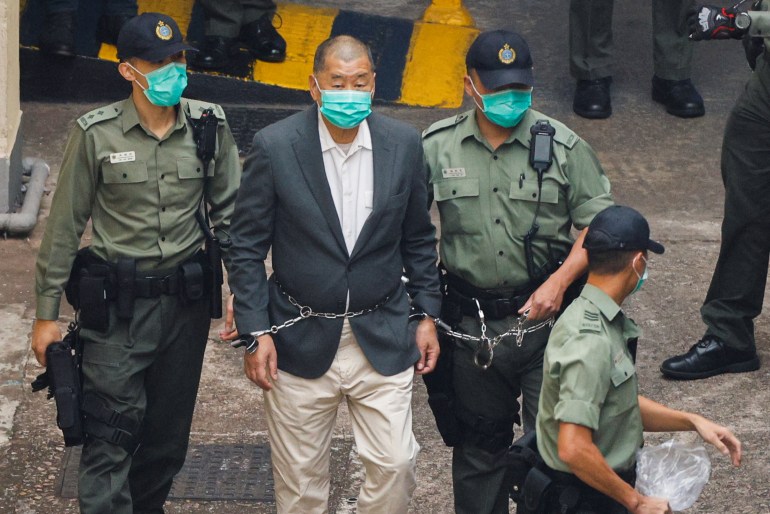 Media mogul Jimmy Lai Chee-ying, founder of Apple Daily, walks to a prison van to head to court, after being charged under the national security law, in Hong Kong, China December 12, 2020. REUTERS/Tyrone Siu

“One reason all this is so chilling is that it suggests that in Beijing’s view now, there is no tolerance for even moderate actions and they want to limit the space even for non-violent expressions of opinion as much as they can,” he said.

Hints of what is to come have already appeared in recent weeks from Xia Baolong, Beijing’s top official in Hong Kong and Macau, who has said in recent speeches that only “patriots” should govern the former British colony and then doubled down with a seminar on the topic in Shenzhen, according to Chinese state media.

Further signals have come from interviews in state media with major figures who have called for Hong Kong to close electoral “loopholes”, said Julia G Bowie, editor of the Party Watch Initiative at the Washington, DC-based Center for Advanced China Research.

“The central argument is that ‘loopholes’ in the election system have allowed people that are not patriots to hold elected positions in Hong Kong, sometimes in collusion with foreign anti-China forces,” Bowie said.

“Xia Baolong laid out standards for evaluating who is a patriot, which I expect will form the basis of an evaluation system to disqualify candidates that are deemed unpatriotic. It’s easy to see how these rather nebulous standards could be used to disqualify anyone deemed hostile to the central government.”

With Hong Kong’s Legislative Council election now slated for September, after a year delay due to COVID-19, Beijing may be hoping to avoid the embarrassment of the district council elections of November 2019, which were widely seen as a referendum of support for the democracy movement after months of sometimes-violent protest.

“In terms of elections, it’s important to note that as limited as Hong Kong’s democratic institutions have always been – and they were very weak before the [1997 UK] handover and have never been robust – elections have provided a way for candidates to bring up issues and sometimes for voters to express their displeasure with the authorities and support for movements,” said Wasserstrom.

“The District Council election in November 2019 was a landslide for pro-democracy candidates, even though Beijing hoped, and its local proxies hoped, that the fact that some protesters had engaged in violent actions would alienate voters from the movement. Similarly, the latest wave of arrests has targeted largely people who were involved in a grassroots primary election, which did not vote anybody into office but provided a symbolic venue for people to express their displeasure with the status quo,” he said. 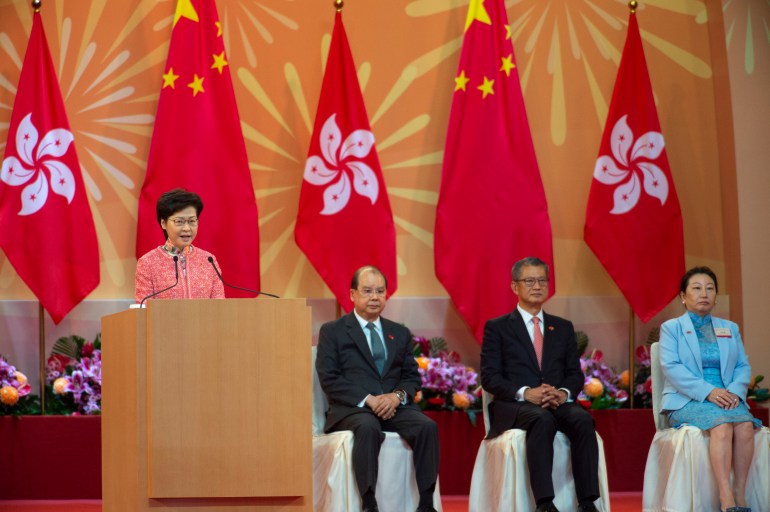 Hong Kong Chief Executive Carrie Lam, left, was chosen by a group of only 1,200 people to be the territory’s leader. All candidates for the post must be approved by Beijing [File: Jayne Russell/AFP]Pro-democracy candidates have long had the odds stacked against them as only a portion of Hong Kong’s legislature is chosen through popular vote. The chief executive, Hong Kong’s highest leader, is also selected by a committee of just 1,200 people with the choice limited only to those approved by Beijing.

In recent weeks, the authorities have doubled down on pledges of allegiance to the state and rolled out national security lessons for all schoolchildren, starting at the primary level.

In late January, Hong Kong’s 180,000 civil servants were given one month to sign a pledge of allegiance to Hong Kong, while an upcoming bill before the legislature would bar lawmakers and district councillors from elections for five years if they violate the city’s mini-constitution or fail to properly swear their oath of allegiance.

“If a requirement is introduced that anyone standing for election at any level in Hong Kong must endorse the position that Hong Kong is an inalienable part of the PRC, then CCP control over Hong Kong will tighten further,” said Bonnie Glaser, director of the China Power Project at the Center for Strategic and International Studies. “Only pro-Beijing candidates will be permitted to run for office.”

Despite the ructions in Hong Kong, a major focus of the NPC in China itself will be on celebrating the country’s so-called “victory over extreme poverty,” announced by President Xi Jinping last week.

While a long-term goal of China’s Communist Party, Xi’s “victory” comes with added political weight after China’s difficult year battling COVID-19 and international hostility for its policies towards Hong Kong and Muslim minorities in western China. Relations with the US also remain shaky even with the departure of Donald Trump and the election of Joe Biden as the new president.

“Xi set this as a target and so, he must and has ‘achieved’ it, even though the basic concept that poverty, a relative concept, can be eradicated is intellectually groundless,” said Steve Tsang, director of the SOAS China Institute in London. 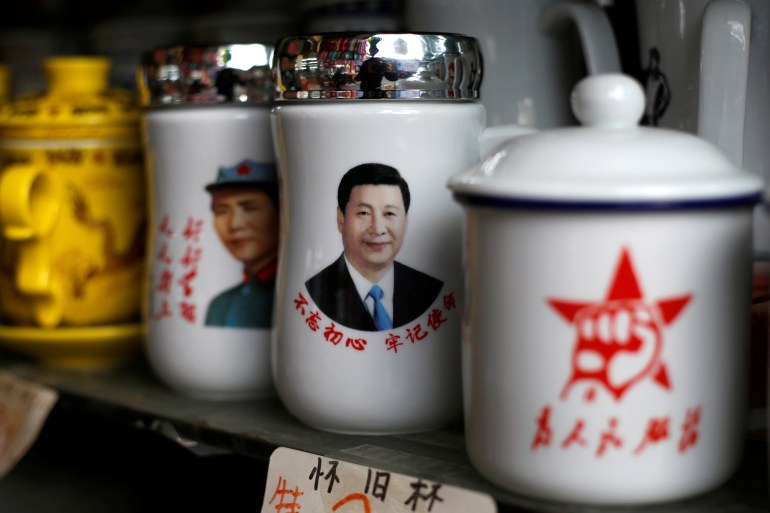 Souvenirs on sale ahead of the NPC in Beijing, including a cup featuring a portrait of Xi Jinping who declared ‘victory’ over extreme poverty [Tingshu Wang/Reuters]“Economic performance or the ability to deliver a ‘better tomorrow’ to most Chinese in return for their embrace and support for the Party monopolising power has been in place since after the 1989 Beijing Massacre,” he said, referring to the 1989 crackdown in Tiananmen Square.

The plan is also expected to detail how China plans to hit peak carbon by 2030 and carbon neutrality by 2060, a goal Xi announced last autumn that is intended to transform China’s status as the largest consumer and producer of coal in the world.

Experts are also waiting to see whether China will set an official GDP growth target after dropping it last year for the first time ever as it grappled with the economic fallout from COVID-19. In 2020, the country’s economy expanded just 2.3 percent.

With China’s success story tied so closely to its astronomical growth in decades past, moving away from official growth targets could be a watershed movement.

“Facing the inevitability of slower GDP growth, the CCP has been trying to transition away from quantitative measures of performance legitimacy toward qualitative measures – like addressing income inequality and environmental pollution – for quite some time,” Bowie said.

“I believe the Party saw COVID-19 as an opportunity to accelerate this transition. If China forgoes announcing GDP targets again this year, it will be a signal of the regime’s confidence that its legitimacy no longer relies on hitting astronomical growth targets.” 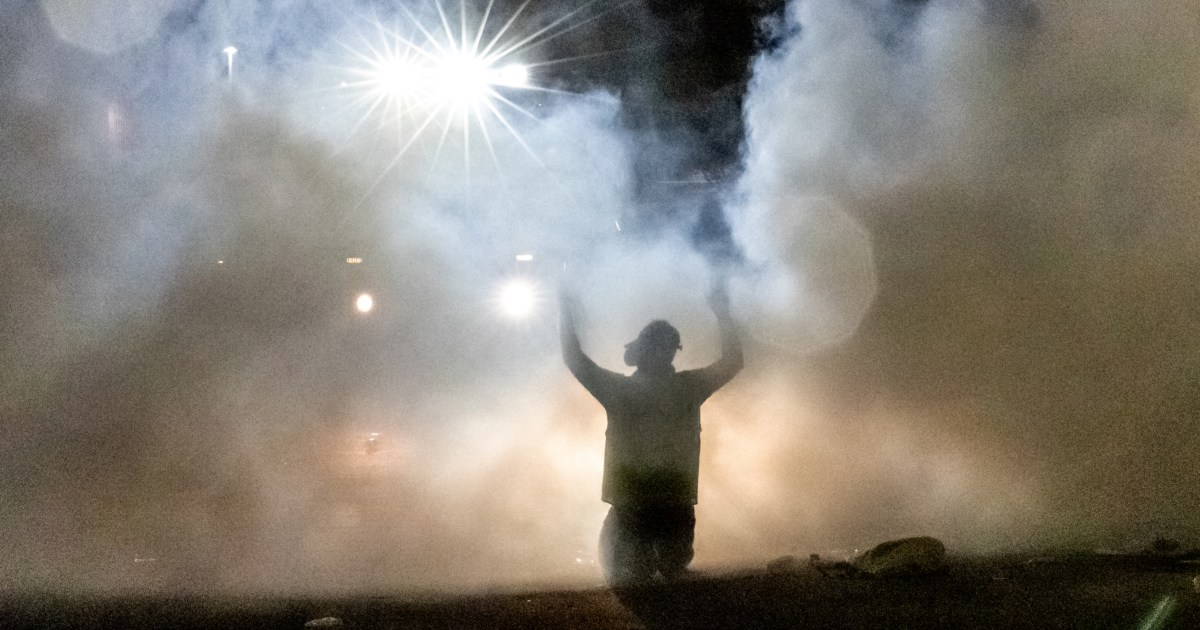