More than 116,000 people are homeless on any given night in Australia and that number is rising all the time. As the country marks Homelessness Week, we tell some of their stories.

Melbourne, Australia – Few people would consider sleeping in a public toilet, on a park bench or on a traffic island “lucky”.

But that is how 50-year-old Phil, who asked that we only use his first name, considers the decade he spent living homeless on the streets of Melbourne.

“I was the lucky one because … I’ve never been robbed or attacked or anything like that,” he explains.

We are talking on the phone, unable to meet in person due to Melbourne’s COVID lockdown.

For most residents of the city, the months-long lockdown has presented major challenges. But Phil says he is taking it in his stride and is spending his time watching wrestling on television.

Now housed and working for the Big Issue magazine, which raises money for marginalised and homeless people, he reflects on his many years sleeping rough. 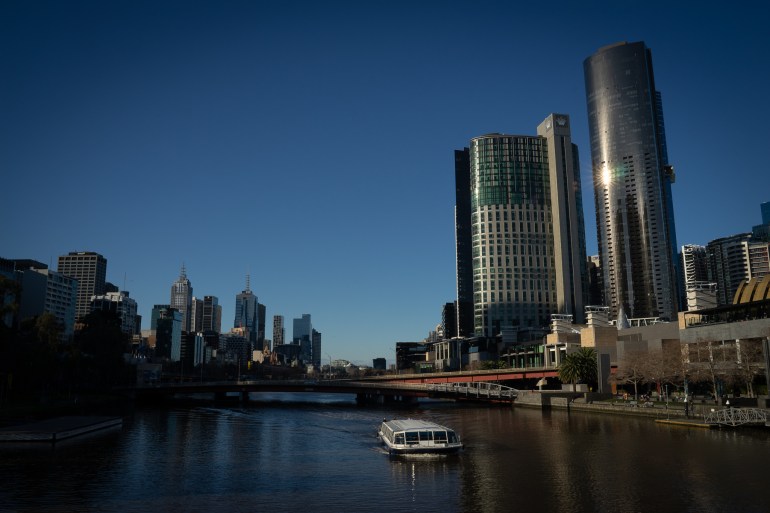 Melbourne is often touted as one of the world’s most liveable cities, and for most it is. The city boasts a wealth of restaurants and bars, holds international sporting events and is home to a thriving arts and music scene. Built around the picturesque Yarra River, it is also replete with parklands offset by impressive skyscrapers. Sprawling suburbs extend out towards the surrounding beach, bushland and hills, areas that are the traditional lands of the Wurundjeri and Boon Wurrung Aboriginal peoples.

But despite the obvious wealth, the last census in 2016 documented nearly 25,000 people experiencing homelessness in the state of Victoria, most of them in the capital Melbourne. And for those like Phil who end up sleeping on the streets, Melbourne is far from liveable.

As well as the threat of being robbed or attacked, Phil says sleeping rough every night “gets really uncomfortable, because you’ve got no bedding [and] no money”. Catching flu and pneumonia in the cold weather is also a risk, he explains.

From foster care to a traffic island

Phil’s pathway to homelessness began at a young age.

He grew up as a state ward in foster care in Adelaide, but left when he turned 18 and the state was no longer responsible for his care.

Phil returned to live with his biological family in the small town of Horsham in Victoria’s northwest, but it did not work out.

There was an “argument” and Phil left, moving to Melbourne, where he moved around between different rooming houses and other forms of temporary accommodation, before eventually ending up on the streets.

He says his family did not know where he was living during this time.

“I did not tell them at all, I kept everything to myself,” he explains.

At one stage, he had no accommodation, no photo ID and no money.

He says this was the safest option, as it was out in the open and brightly lit. Other areas, like parks, could be more dangerous, he explains.

Phil’s experience of homelessness and the people he met on the streets have shown him that the stereotypes of homeless people are often wrong. Homelessness can take different forms and affect very different people, he explains, adding: “Every story is totally different.”

What is clear, however, is that the number of such stories is increasing.

A recent Victorian parliamentary inquiry into homelessness confirmed that in the five years since the 2016 census the number of homeless has risen, with 1 in every 57 Victorians accessing government-funded homelessness services in 2018/2019. 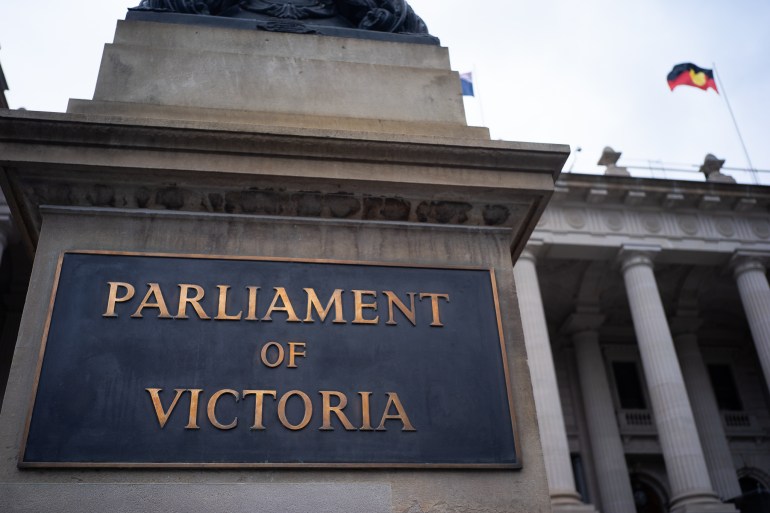 The Victorian government recently held an inquiry into homelessness and announced funding for 12,000 new public houses. However, experts say this still does not address the overall shortage of houses required to adequately tackle homelessness in Australia [Ali MC/Al Jazeera]

The inquiry also acknowledged that this figure was likely to be an underestimate, in particular given the effect of both the recent summer bushfires and COVID. And the increase is not restricted to Melbourne or Victoria.

Across Australia homelessness is on the rise, with the 2016 census revealing an increase of nearly 14 percent over five years.

This statistic is even more staggering considering Australia topped the 2018 Global Wealth Report for the highest median wealth per adult of any country on the planet.

Yet while the average house price in cities like Melbourne and Sydney hovers around the million-dollar mark (approximately US$737,000), on any given night about one in every 200 people in Australia are homeless.

Homelessness can take many forms. The Australian Bureau of Statistics describes as homeless anyone who “does not have suitable long-term accommodation options”.

This includes those staying in temporary and emergency accommodation, with friends and family (“couch surfing”) or in overcrowded dwellings.

While “rough sleepers” like Phil may be the most visible, those who sleep on the streets make up less than 10 percent of all people who experience homelessness.

Among those numbers are a growing number of women, migrants and refugees, young people and elderly people. Indigenous Australians are particularly over-represented in the figures, making up about 20 percent of all people experiencing homelessness despite being only 3.3 percent of Australia’s population.

Anna Paris is the operations Manager at Sacred Heart Mission, a Melbourne-based NGO that offers a range of services to those experiencing homelessness, including a meals programme and a women’s safe house.

She says homelessness is often the result of a combination of factors, including domestic violence, childhood trauma, mental health and substance use. In particular, she points to a “prolonged experience of trauma – especially early childhood trauma – and the accumulation of trauma from people when they are homeless”.

The recent parliamentary inquiry reported that in 2016-17, at least a quarter of people who sought assistance from homelessness services indicated that they had a mental health issue.

The inquiry further stated that the isolation and trauma of being homeless can lead to the onset of mental illness, with organisations such as Open Minds stating that homelessness itself can cause anxiety, depression, stress and sleeplessness, often leading to substance abuse simply to cope.

It is this combination of complex trauma that Anna says exacerbates the homeless experience and can contribute to long-term PTSD.

“So often [people] are coming to us with PTSD or really prolonged experiences of poor mental health, simply because they have been impacted by so many things over a long period of time,” she explains.

Yet while the underlying causes for homelessness might be varied and complex, Anna says that fundamentally, homelessness rates are on the rise in Australia due to a chronic lack of affordable, safe and secure housing.

“Individuals carry their reasons why they might present [at a homeless service] on any given day,” she says. “But there’s a massive lack of affordable housing.”

Anna believes that access to stable and secure housing provides a foundation from which people can seek support for mental health issues as well as pursue education or find employment. But, without access to a home “people are in survival mode every day, wondering where they are going to sleep at night, are they going to eat, are they able to shower, where will they put their belongings”.

“I think people lose hope too because there is a massive lack of housing supply,” she says.

The state of Victoria has the bulk of that shortage, with about 100,000 people on the waiting list for public housing. 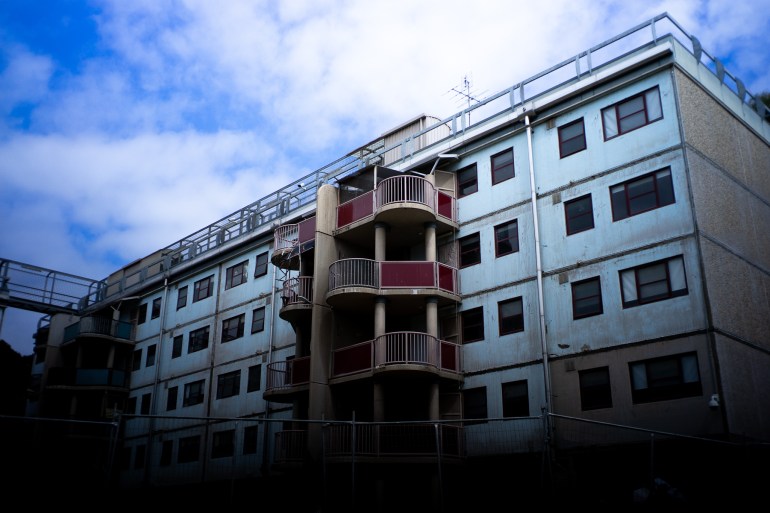 The Victorian State Government recently announced a multi-billion dollar investment into public housing, in part to replace dilapidated housing estates like this one in the inner-city suburb of Richmond [Ali MC/Al Jazeera]

Kerry Slane is an outreach worker for Launch Housing, a homeless charity in Melbourne that aims to end homelessness.

She acknowledges the reasons why people experience homelessness are complex but says that “the lack of public housing and affordable housing in the city of Melbourne” is one of the greatest issues.

Kerry says her clients often jokingly tell her they wish they had “been put onto the public housing waiting list” when they were born “because by the time [they] are 30 or 40 [they] would get a home”.

The state of Victoria has been criticised for not only having the greatest housing shortage in Australia but also for spending the least to tackle the problem. Recently, however, the government made moves to rectify the issue, holding a parliamentary inquiry into homelessness within the state and announcing increased funding to build new public homes. 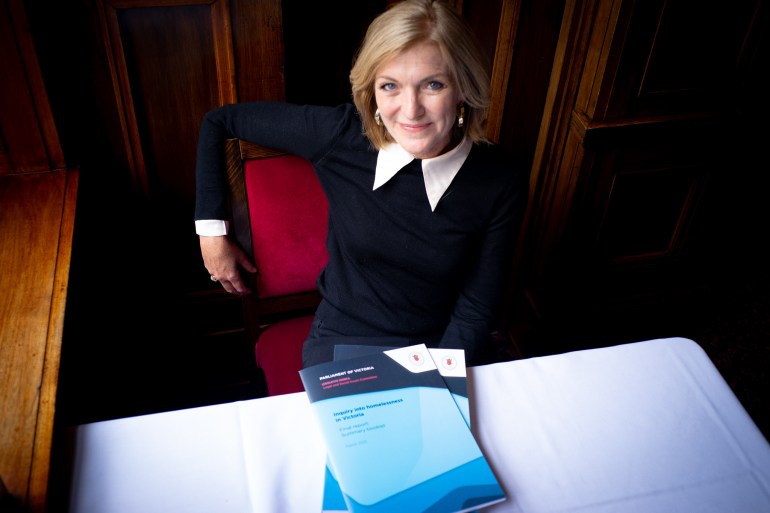 MP Fiona Patten led the government inquiry into homelessness. She says: ‘To keep homelessness a priority is something I see as my task as the person who chaired this report’ [Ali MC/Al Jazeera]

Fiona Patten, who chaired the inquiry, said the process relied largely on submissions from people who had experienced homelessness, all of whom said “give us a home.”

But in addition to examining housing provision, Patten said the inquiry also asked, “how could we have helped that person not to become homeless?”

The inquiry produced 51 recommendations, which not only focus on the issue of housing supply but also how to address the underlying causes that drive homelessness in the first place.

They were released on the back of a government announcement that it would build 12,000 new affordable public houses.

The project – estimated to cost $5.3bn (US$3.9bn) – will give housing precedence to priority groups such as women experiencing domestic violence, Indigenous people and those with a mental illness.

Yet despite the investment there will still be a huge shortfall in social housing, with the Australian Housing and Urban Research Institute estimating that 166,000 additional houses will need to be built by 2036 in order to meet the demand.

‘A smile on their face’

Phil spent more than 10 years sleeping on the streets, couch surfing or in temporary rooming houses before getting assistance from the charitable organisation St Vincent De Paul.

A case worker from the organisation assisted Phil with the paperwork to apply for a house. He thought he was going to be on the waiting list for 10 to 15 years, such is the shortfall in permanent public housing in Melbourne. But six years after applying, he finally received a letter telling him he had been given a permanent home. He now resides in a flat in a block in Melbourne’s suburbs.

He can still be found on the streets selling the Big Issue, but he no longer sleeps on them.

As well as selling the magazine, Phil also works as one of the organisation’s classroom educators, teaching school children about homelessness.

“I love doing it,” he says about selling the Big Issue on the street. “I have my music going with me so I sing and dance as well. It makes people have a smile on their face if they are having a grumpy morning.”

This series was supported by the City of Yarra. 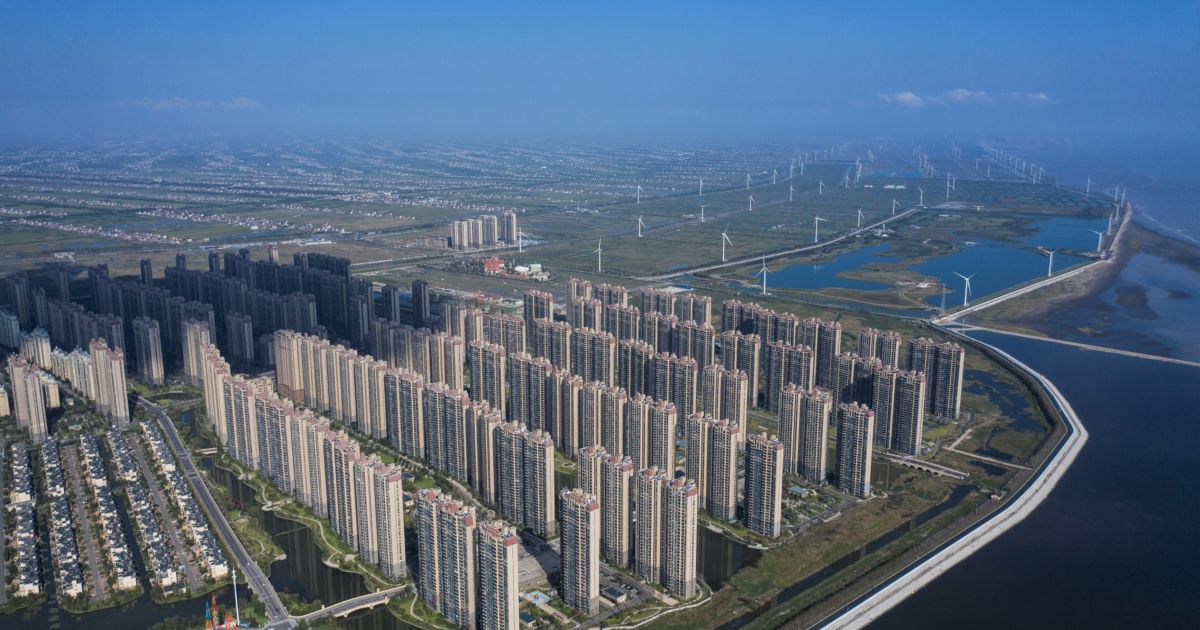 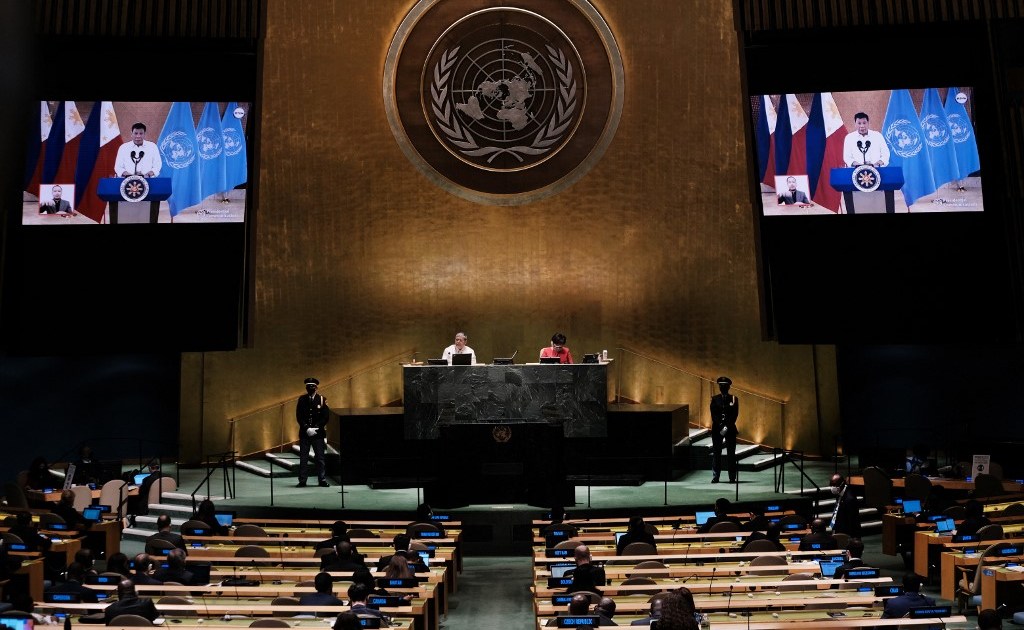