Police say the group is suspected of providing the boat and funds to help the 12 activists who were trying to get to Taiwan.

Police in Hong Kong said on Saturday that they had arrested nine people who were suspected of helping the 12 residents detained by the mainland authorities after allegedly trying to escape the territory by boat in August.

The group includes four men and five women – the youngest 27 and the oldest 72 – Ho Chun-tung, the Senior Superintendent of the Organized Crime and Triad Bureau told reporters in a briefing that was posted to Facebook.

“We think they are friends with the 12, and they were arrested for assisting offenders,” Ho said. “That means they might have done something to prevent the prosecution of these people or to prevent them from being arrested by police. Their roles include funding, providing a boat, providing transportation, and also providing accommodation before they abscond(ed) from Hong Kong.” 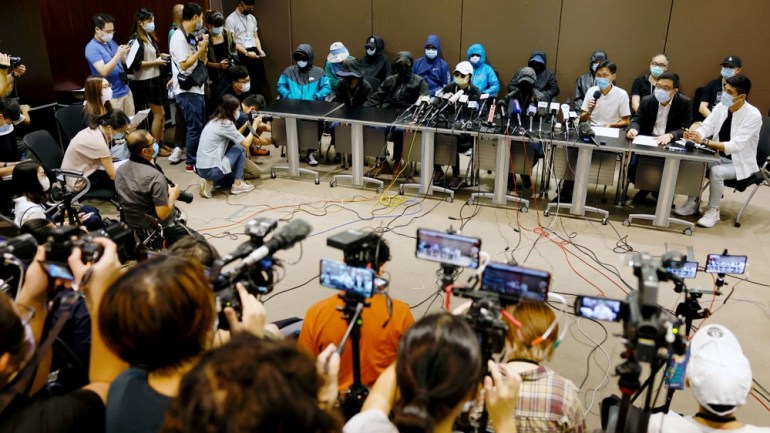 Family members of the 12 detained Hong Kong activists have appealed for help [Tyrone Siu/Reuters]The 12 Hong Kong residents were picked up by the mainland coastguard some 70 kilometres (43 miles) southeast of Hong Kong on August 23 and handed to police in Shenzhen, the southern mainland city bordering Hong Kong.

China said earlier this month that the group had been formally arrested. Two of those detained have been accused of helping the group escape, while the remaining 10 face charges of crossing the border illegally.

Authorities in Hong Kong have said some of those on board the boat were facing prosecution for activities linked to last year’s pro-democracy protests.

The marches and protests were triggered by opposition to a bill that would have allowed people to be sent to the mainland for trial, where courts are controlled by the ruling Communist Party, but evolved into broader calls for democracy and greater police accountability.

In June, after months of civil unrest, Beijing imposed a National Security Law in the territory that enabled mainland security agencies to operate in Hong Kong for the first time, effectively snuffing out dissent.

Taiwan, a self-ruled island and one of the region’s most vibrant democracies has offered itself as a sanctuary to Hong Kong activists.