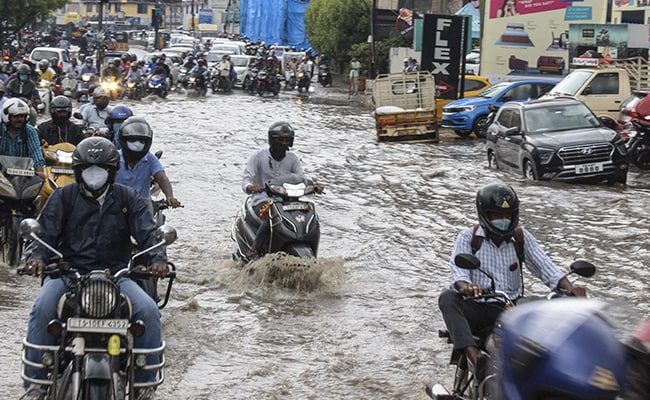 Andhra Pradesh, Telangana and Odisha received very heavy rainfall after the deep depression in Bay of Bengal crossed the coast over East Godavari district on Tuesday morning. A woman was killed when the wall of her house collapsed in heavy rain. According to the state disaster management department, the depression crossed the coast between 6.30 and 7.30 am, with wind speed of 55 to 65 km per hour. Rainfall ranging from 11 cm to 24 cm was recorded at more than a hundred locations in Andhra Pradesh, according to the Met department. The worst-hit districts are East Godavari, West Godavari, Srikakulam, Vizianagaram, Visakhapatnam and Krishna.

A cargo vessel from Bangladesh, was swept close to the Tenneti Park beach in Visakhapatnam due to stormy winds. The Visakhapatnam Marine Police said, the ship's anchor broke. 15 crew members have been rescued.

Andhra Pradesh: One person died while three others were rescued after their car was swept away in water in Visakhapatnam's Narsipatnam, earlier today.

Several roads in Visakhapatnam, East Godavari and Krishna were flooded. Trees uprooted during the storm blocked vehicles. Power outages were also reported, sources told news agency Press Trust of India. Power lines were damaged at more than 50 places. "We have taken up repairs and restored power supply in most of the places," a senior officer said.

Small rivers in Andhra Pradesh like the Tandava, Sarada and Gostani were overflowing due continuous rainfall for the last two days, sources in the State Disaster Management Authority said.

According to the latest weather bulletin, "light to moderate rainfall" is expected in parts of Maharashtra and heavy downpour is likely in the Konkan and Goa region.