Have nationwide protests led to a spike in US coronavirus cases?

It has been 16 days since the killing of George Floyd - an unarmed Black man who was pinned to the ground by a white police officer in Minneapolis, Minnesota. The officer, who has since been fired and charged for murder, knelt on Floyd's neck for nearly nine minutes, as Floyd pleaded "I can't breathe".

Since then, tens of thousands of people across the United States and abroad have taken to the streets demanding justice for Floyd and an end to systemic racism. Some of the largest US demonstrations, with more than 10,000 people, occurred in the nation's capital, Washington, DC. There, protesters waved placards with the words "No justice! No peace!", "I can't breathe" and "Black lives matter".

With such large crowds, by now, you could possibly expect to see an increase in the number of registered coronavirus infections - but that has not been the case so far.

According to the US Centers for Disease Control and Prevention (CDC), COVID-19 symptoms may appear two to 14 days after exposure to the virus.

What the data shows (so far)

To see whether or not there is any visible relationship between protests and coronavirus cases, we looked at the number of daily confirmed COVID-19 cases provided by Johns Hopkins University and compared it with a list of cities where large protests are known to have taken place. In such an analysis, the best we can do is point out whether there is a correlation between the two data sets. This is very different from proving cause and effect - especially given the multitude of factors that contribute to the spread of the virus.

The US is a very large country, both in population and geography. Across the country, the average number of daily confirmed cases has gradually been on the decline. Averages can, however, be misleading. According to data compiled by the New York Times, more than a third of the US's 50 states are still seeing an increase in daily infections. Different cities are at very different stages in the fight against the pandemic, yet all 50 states have now taken steps to reopen following weeks of coronavirus restrictions.

While there were hundreds of cities across the country that witnessed protests, thousands more did not. To account for this, we looked at the numbers from a few key locations where large protests are known to have taken place.

Minneapolis is located in Hennepin County. The Midwestern county currently has 9,567 confirmed coronavirus cases. The city has seen sustained protests since May 26, the day after Floyd was killed. Over the past 15 days, new coronavirus cases have decreased compared to the 15 days prior. 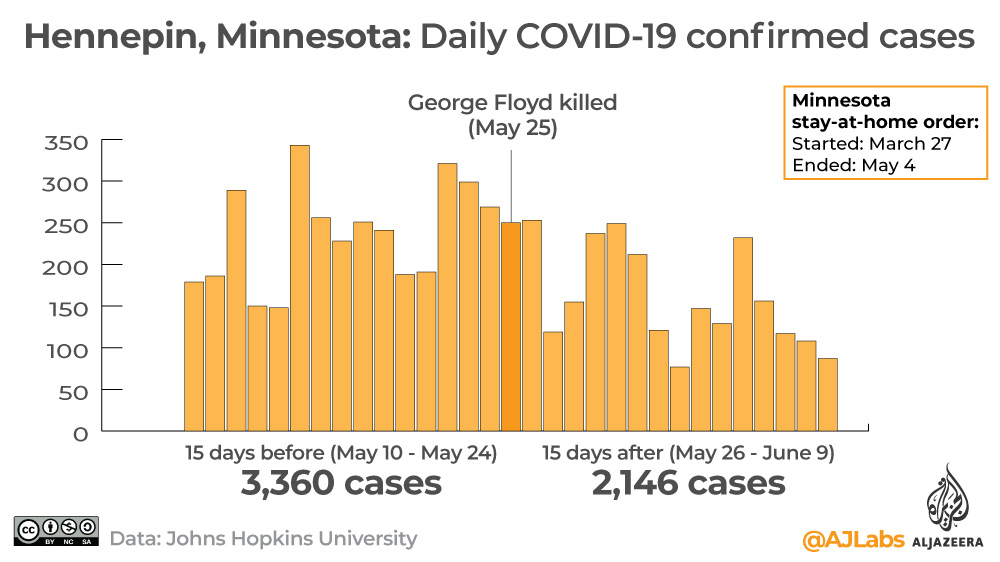 The US capital has recorded 9,474 confirmed coronavirus cases since March. Demonstrators have amassed near the White House for 13 consecutive days with more protests expected this week. DC, too, has seen a decrease in COVID-19 cases over the past 15 days. 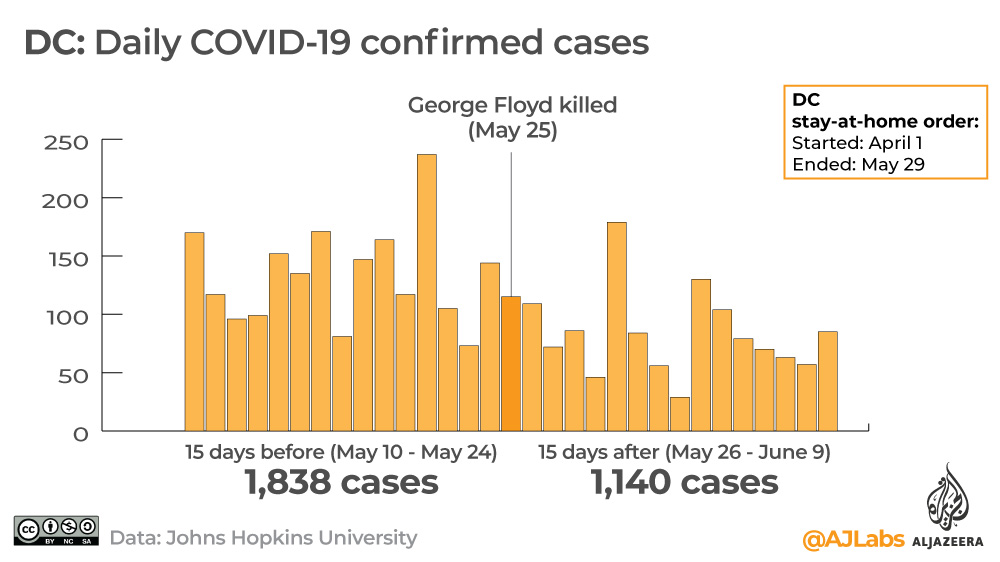 New York City is the US's most populated city. It also has been one of those that have been hit the hardest by the pandemic. The East Coast city has recorded 207,993 cases of COVID-19 this year. On Sunday, Mayor Bill de Blasio lifted the city-wide night curfew that he ordered a week earlier to prevent looting and other violence triggered by Floyd's killing. New confirmed cases dropped by more than 5,000 cases over the past 15 days. 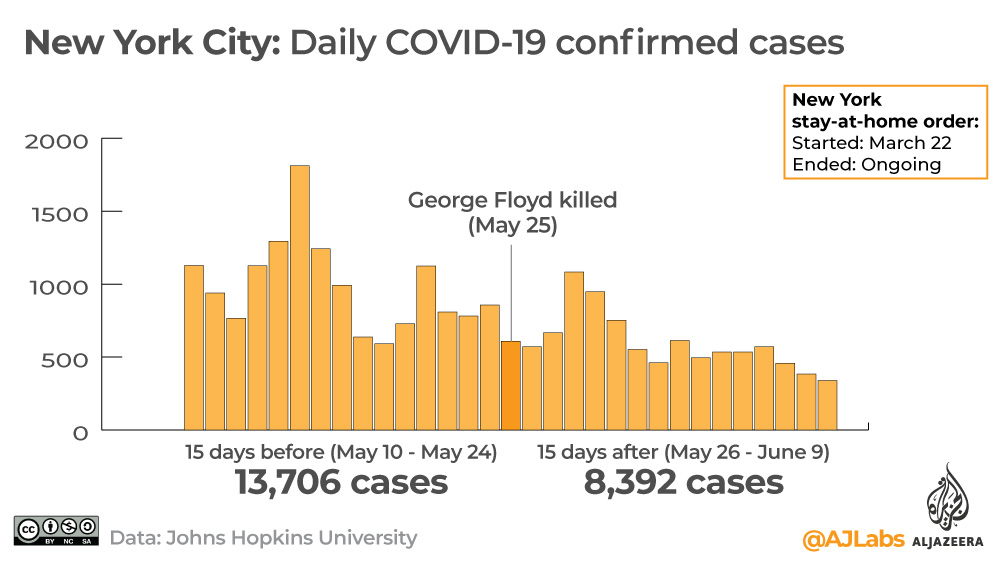 Cook County is home to Chicago, the country's third most populous city. With 83,271 reported coronavirus cases, the county has one of the highest figures in the US. On June 7, Chicago's mayor lifted the city's 9pm curfew, which was put in place on June 1 as protests began to sweep the country. Confirmed cases, meanwhile, have dropped sharply from 19,355 cases (May 10 - May 24) to 8,392 (May 26 - June 9). 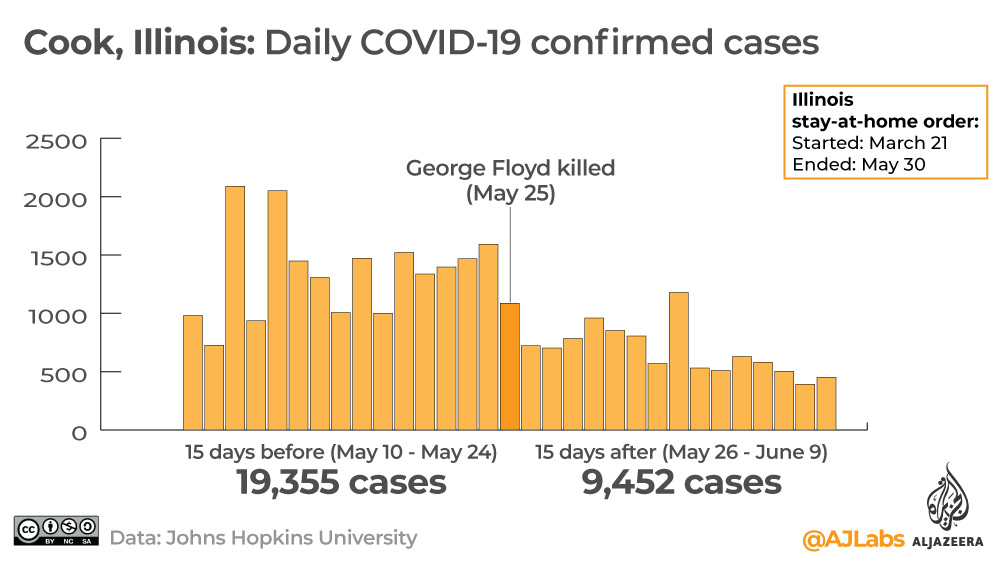 Los Angeles is the US's second most populated city. Los Angeles County - where the city resides - has registered a total of 65,945 confirmed cases since March. New coronavirus cases have increased over the past few weeks which experts have attributed to a slower shutdown and crowded living conditions, among other factors. 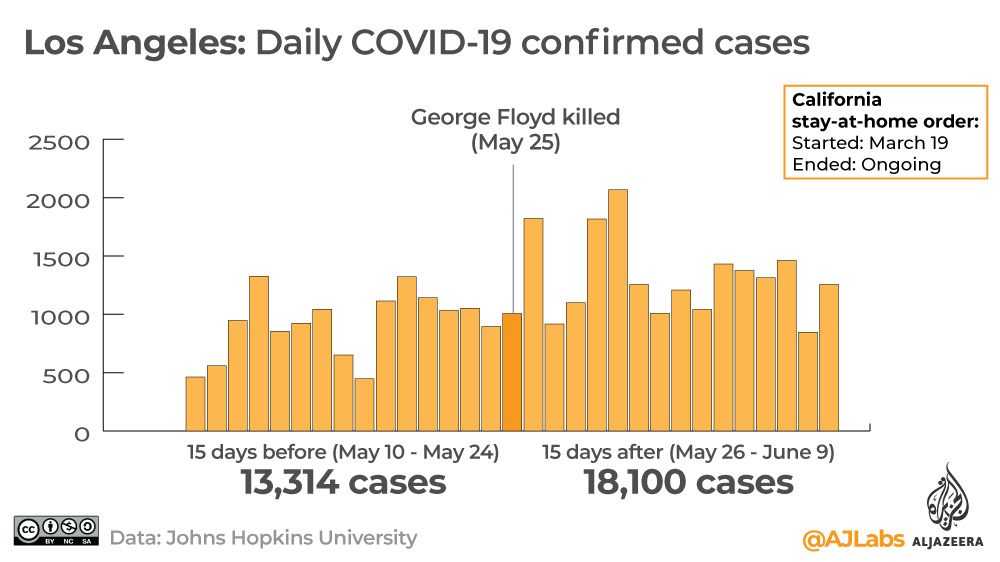 Data for rest of the country (irrespective of where protests occurred) shows that out of the US's 3,141 counties, 1,421 saw an increase, 1,198 a decrease and 522 had the same number of reported coronavirus cases since Memorial Day on May 25 compared to the 15 days before.

Anthony Fauci, the US's top infectious disease expert, told Washington, DC radio station WTOP that "the reasons for demonstrating are valid, yet the demonstration itself puts one at an additional risk".

He advised protesters who plan on going out to wear a mask and keep it on at all times.

Photos from the demonstrations showed many young people, of various races, wearing face masks while protesting (though masks were not worn by all). The CDC recommends that everyone wear cloth face coverings when leaving their homes, regardless of whether they exhibit any COVID-19 symptoms. The cloth face covering is not a substitute for physical distancing - which the CDC recommends to be at least two metres (six feet).

"The evidence suggests that although still significant, the risk of transmission of the virus in open spaces is much less than in indoor areas", said Amir Khan, a doctor and senior lecturer at the University of Leeds and the University of Bradford in the United Kingdom.

Khan added that "fresh air dilutes the virus to a degree that transmission is much less". Furthermore, "there is also some evidence, albeit small, that direct exposure to sunlight kills the virus quickly". 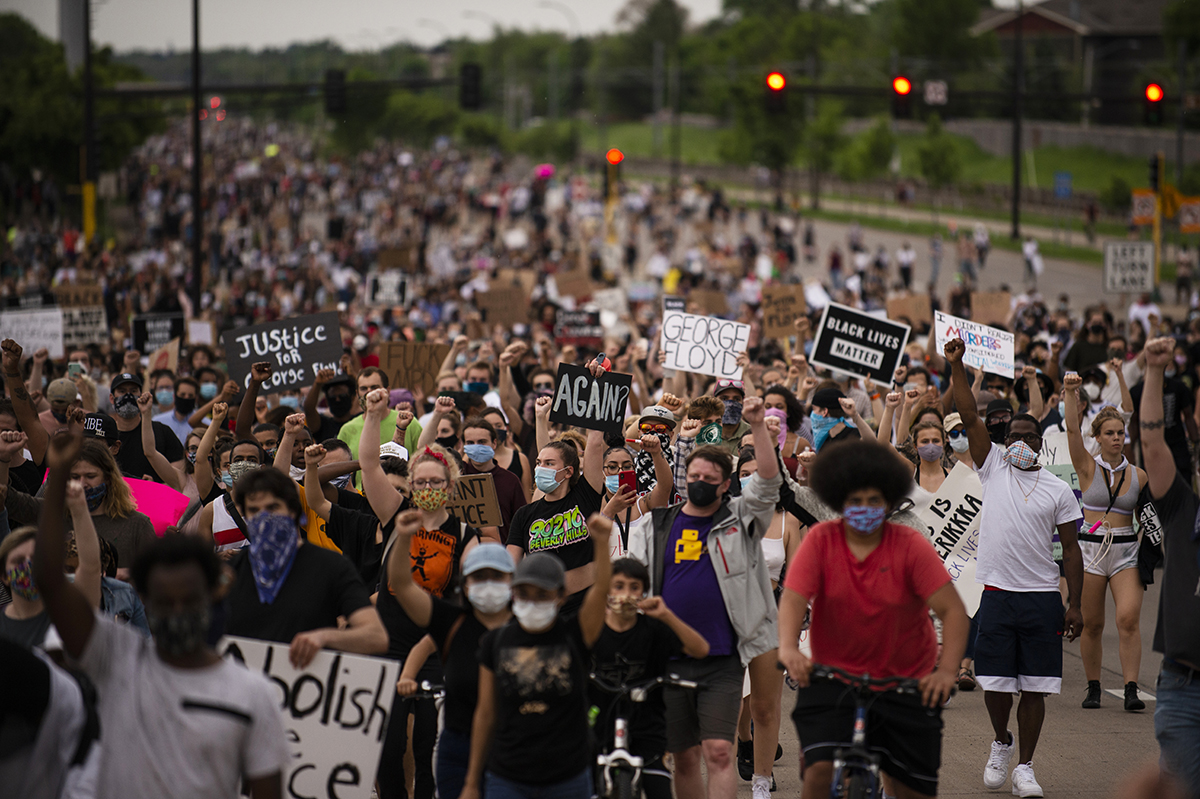 If you have not been tested, you are not counted

Maia Lesosky, associate professor of epidemiology and biostatistics at the University of Cape Town, told Al Jazeera that "about 95 percent of people who experience symptoms get them within 14 days of infection, but in order see an increase in cases, we also need to account for the delay in getting tested and reported". Furthermore, she notes, "being outdoors certainly reduces the risk of transmission, by 20- to 500-fold according to some estimates."

One of the stealthiest characteristics of the coronavirus is that it can be spread with little to no symptoms. This means that the number of people who are actually infected is probably much higher than the number of official confirmed cases.

Elaborating further, Lesosky said, "in contrast, the crowding that often happens during mass marches, and especially the responses by the police including the use of tear gas, pepper spray [respiratory irritants] and the arrest and incarceration of large numbers of people are very likely to increase transmission."

Across the world, health officials will be closely monitoring the figures where large protests have taken place.

In many countries, authorities have banned demonstrations due to health concerns, but protesters showed up nonetheless.