President Joe Biden is halfway through his pledge to vaccinate 100 million Americans in his first 100 days in office.

US President Joe Biden held a ceremony commemorating 50 million coronavirus vaccine jabs on Thursday, amid rising concerns about the emergence of new variants in at least two states.

Biden, who took office on January 20, pledged to vaccinate 100 million people in his first 100 days in office. Now, on his 37th day in office, Biden said he is on track to exceed that goal.

“Today, I am here to report that we are halfway there,” Biden said adding that he would also celebrate the 100th million dose once it is reached.

Three people – a firefighter, a nurse and a pharmacy worker – were vaccinated during the televised ceremony held in the White House on Thursday.

“We are moving in the right direction,” he said, “despite the mess we inherited from the previous administration which left us with no real plan to vaccinate all Americans.” 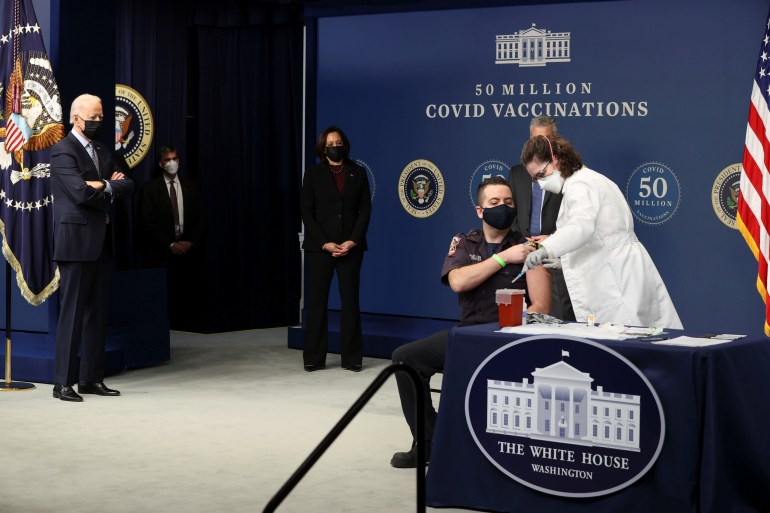 Washington, DC firefighter EMT Corey Hamilton receives a dose of the Pfizer vaccine during an event to commemorate the 50 millionth COVID-19 vaccination, in Washington [Jonathan Ernst/Reuters]The US was vaccinating on average 1.3 million Americans every day, but that rate was derailed last week after severe winter storms across large swaths of the country impacted transportation and led to dozens of vaccination sites to temporarily shut down.

That rate could increase soon. The US may this week give emergency authorisation to the single-dose Johnson & Johnson vaccine after the US Food and Drug Administration (FDA) published documents saying the vaccine is safe and effective against the coronavirus.

A regulator panel of independent experts is scheduled to meet on Friday to decide whether to approve the shot. If approved, Biden said they will “roll it out as quickly as Johnson & Johnson can make it.”

The push to vaccinate more Americans is taking place amid a steady decline in new cases, hospitalisations and deaths, but it is also happening amid the emergence of two variants that some researchers say may be more transmissible, and may show resistance to the vaccines currently being administered.

A new coronavirus variant that shares some similarities with a more transmissible and intractable variant discovered in South Africa is on the rise in New York City, researchers said on Wednesday.

Researchers at Columbia University found that variant B.1.526 shares some worrying characteristics with B.1.351, the strain first identified in South Africa, and P.1., which was first identified in Brazil. Several studies have suggested that those new variants are more resistant to some existing vaccines than earlier versions of the coronavirus.

“We don’t have any evidence at this point that the variants, that this New York variant, the 1.526 is what is contributing to the trajectory of cases, which we should emphasise continue to decrease,” Chokshi said during a news briefing. 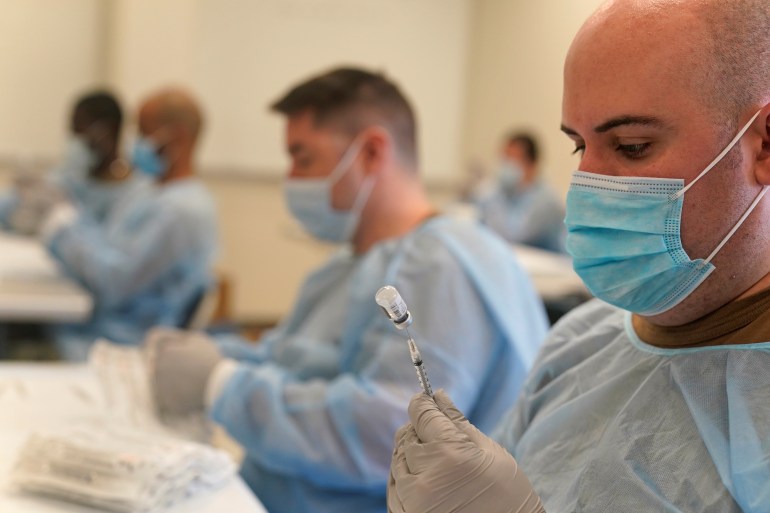 Navy personnel prepare doses of the COVID-19 vaccine before the opening of a mass vaccination site in Queens, New York [Seth Wenig/Pool via Reuters]Researchers have also detected a new variant in California that may be more more contagious than the original strain, according to a study by the JAMA medical journal published on February 11.

The study found that the California strain called CAL.20C, first emerged in July last year, and in January accounted for some 35 percent of all COVID-19 cases in the state and 44 percent of samples collected. According to the US Centers for Disease Control and Prevention (CDC) the spread of CAL.20C’s has been on the rise since September.

Charles Chiu, a professor of laboratory medicine and infectious diseases at the University of California at San Francisco School of Medicine, and a lead scientist on coronavirus mutations said variants – even when they are highly transmissible – can still be controlled through social distancing, wearing masks, washing hands, as well as continuing to vaccinate people.

“Fundamentally, it doesn’t change the direction we are going,” Chiu told the Washington Post, “which is we want to hold cases down to where we can get the pandemic under control. Simply having a more infectious variant circulating is not going to be the end of the world.”

And other studies have shown that recently launched coronavirus vaccines are still likely to neutralise the virus and protect against severe illness, even for infections with new variants. Vaccine makers are also working to develop booster shots to combat mutated versions of the virus.