As many as 33 rivers in China have risen to their highest levels in history after days of torrential rain, a senior water ministry official has said, with more rain forecast.

Ye Jianchun, vice minister of water resources, told a briefing on Monday that 433 rivers - as well as major lakes like the Dongting, the Poyang and the Tai - had all risen beyond their warning levels since the flood season began in June.

"Going into the key flood-prevention period of late July to early August, the current trends remain grim on the Yangtze and the Lake Tai basins," he said, adding that the belts of heavy rain that have lashed central China would eventually head north.

Average rainfall has been at its highest since records began in 1961.

The emergency ministry said last Friday that 141 people were dead or missing, with economic losses at around 60 billion yuan ($8.57bn).

Flood-control authorities throughout the Yangtze basin have already declared "red alerts" that cover major population centres such as Xianning, Jiujiang and Nanchang.

A red alert has also been declared at the Poyang lake, where water levels are more than 3 metres (9.84ft) higher than normal, another record high.

In some flood-stricken regions, soldiers filled sandbags to shore up riverbanks and prevent more damage. Town streets were inundated, and rescue workers waded through hip-deep water with inflatable boats to reach people trapped in homes turned into islands. 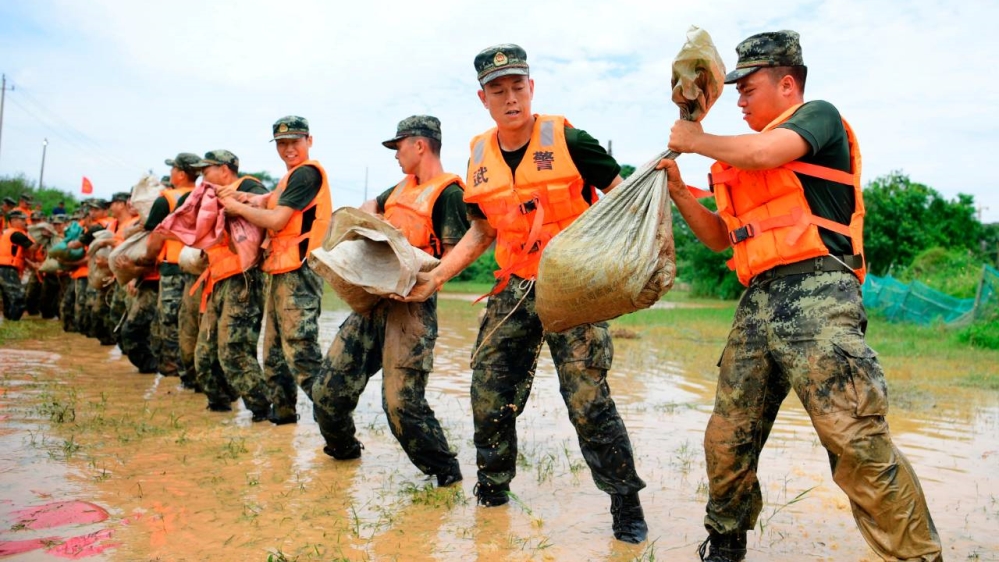 According to water ministry data, warning levels were breached at more than 70 flood-monitoring stations on Monday.

Water levels at the Three Gorges reservoir, which cut its discharge volumes for a fifth time on Saturday to ease downstream water levels, have now risen to 153.2 metres (502.62ft), 6.7 metres (21.98ft) higher than the warning level.

China's weather bureau said that although some regions in the southwest would see a temporary respite from the heavy rain on Monday, central and eastern China would continue to bear the brunt of the storms.

Authorities, however, dismissed fears of possible repeat of the devastating flooding that hit the country in 1998, according to the state-owned Global Times.

Analysts also said that while the situation was likely to be difficult in the coming week or weeks, China had made significant investments in water conservation initiatives, especially the Three Gorges Project, and improved its emergency response in recent years.