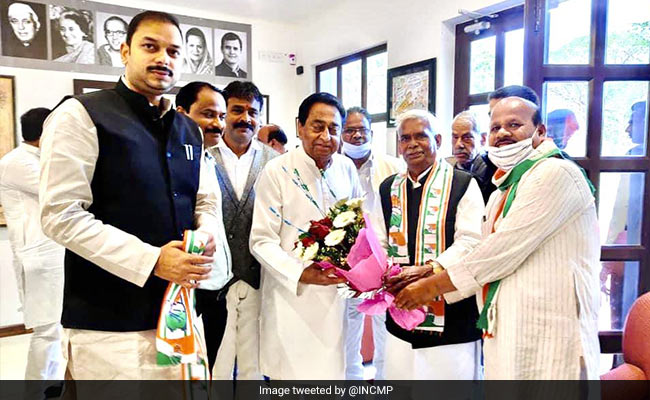 A politician who had pledged to spread Mahatma Gandhi's killer Nathuram Godse's message to people has joined the Congress in Madhya Pradesh ahead of civic polls. Babulal Chaurasia, a former municipal corporator, was drafted into the party by state Congress chief and former Chief Minister Kamal Nath.

A Congress leader justified the decision to take him back using the parallel of Rahul Gandhi. "Earlier he was in Congress but he fought the elections and got elected as a corporator from Hindu Mahasabha. Our party leader (Rahul Gandhi) has forgiven the killers of his father. They (Gandhis) are so large-hearted, it's because of their values that a person worshipping Godse started worshipping Gandhiji," said Praveen Pathak, a Congress MLA in Gwalior.

Chaurasia claimed that he had been "pushed to attend" Godse tributes. "I've been associated with the Congress in the past, so it's a return to the family," he told reporters.

The Congress's critics say its move betrays its desperation in a state where it has not fared well since it lost power last year following mass defections to the BJP.

The party is seeking to regain some ground in upcoming municipal polls in the Gwalior-Chambal region, where it had last year performed poorly in assembly by-elections. The region is the stronghold of Jyotiraditya Scindia, the high-profile leader whose switch from the Congress to the BJP set in motion the Kamal Nath government's collapse and the return of the BJP's Shivraj Singh Chouhan to power.

BJP Spokesperson Rahul Kothari said: "It's because of the civic polls as they have been wiped out of the Gwalior-Chambal region. A month back, Kamal Nath had asked Chief Minister Shivraj Singh Chouhan whether he was with Mahatma Gandhi or with Nathuram Godse. Now Kamal Nath himself needs to answer that question."

Babulal Chaurasia made it into headlines in 2019 when he declared that he would forward Nathuram Godse's last court statement to one lakh people.

Chaurasia has often been spotted in events dedicated to Godse, who assassinated Mahatma Gandhi in 1948. He was reportedly present at a 2017 event in which a group offered prayers before Godse's statue.

His former municipal ward in Gwalior is the only one in the state that has a temple dedicated to Godse.

When questioned about his glorification of Godse, Chaurasia said: "I didn't know at that time what it was all about... I was pushed to the forefront of these events by others."

The All India Hindu Mahasabha mocked the Congress, with its leader Jaiveer Bhardwaj saying the party was "ready to take anyone".