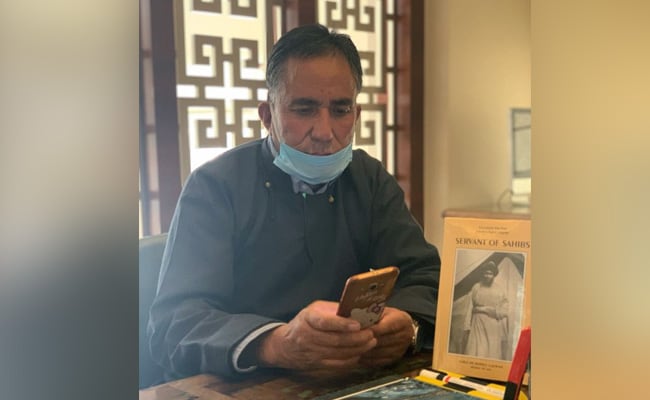 Amin Galwan with a picture of his grandfather Ghulam Rasool Galwan, after whom the Galwan Valley is named

The Galwan Valley is and always will be a part of India, Mohammad Amin Galwan, grandson of the Ladakhi explorer after whom the valley was named, told NDTV while narrating the tale of his people and the land.

Days after India and China's most bloody face-off in five decades and Beijing's recent claims of sovereignty over parts of east Ladakh, including the geo-politically strategic Galwan Valley area, NDTV spoke with the Leh resident whose family has been here for generations.

"The valley was named after my grandfather - Ghulam Rasool Galwan - after he helped a group of British explorers return safely after losing their way during an expedition," Mr Galwan said.

Sometime in the latter half of the 19th century, when the British-ruled India was worried about Russian expansion towards Tibet, a local pre-teen Ghulam Rasool Galwan assisted British expeditions in the region as a guide. He guided troops through the hostile terrain as they tried to gather and assess intelligence about Russian intrusion, which could pose a threat to British interests in India.

"My grandfather was born in 1878 in Leh and had started working as a guide for the British in Tibet, mountains of central Asia and especially the Karakoram Range, when he was 12 years old," Mr Galwan said.

He added that during one such excursion with Lord Dunmore, hostile weather in Aksai China led their caravan astray. "My grandfather went in search of a route and reached a river. He found a new route which helped the explorers escape death. So, Dunmore named the valley and the river after my grandfather," he said.

Reacting to Monday's confrontation between soldiers of the two nations, Mr Galwan said China had tried to claim this land in 1962 as well. "This place was a part of India and will remain a part of India. Our soldiers fought them off then and they have done so again. We respect our soldiers and salute their sacrifice," he said.

The Galwan Valley has been the flashpoint of a five-week border row. Since May, the armies of the two nuclear-armed nations have engaged in various areas, including Galwan Valley, Hot Spring, Daulat Beg Oldie and Demchok, among other parts of east Ladakh.

Twenty Indian soldiers lost their lives in a clash with Chinese troops in Galwan valley on Monday while China suffered twice as many casualties, Indian sources have said.

Later on Wednesday, in response to a Chinese commander's claim on Galwan valley that was read out at the Chinese Foreign Ministry's briefing, India's Foreign Ministry spokesperson Anurag Srivastava described the assertion as "exaggerated and untenable".