France church attack: What we know so far

A knife-wielding assailant beheaded a woman and killed two other people in a suspected terrorist attack.

France is facing the fear of deadly attacks after several people were stabbed at a church in the Mediterranean city of Nice, prompting the country to raise its security alert status to the highest level.

This is what we know so far:

A knife-wielding attacker beheaded a woman and killed two other people at the Notre Dame church in the French city of Nice.

The man entered the building and slit the throat of a church employee, partially beheaded an elderly woman, and badly wounded another woman, according to a police source.

The employee and the elderly woman died on the spot, the other woman managed to make it out of the church into a nearby cafe, but she later died from her wounds, Nice Mayor Christian Estrosi told reporters at the scene. None of the victims has so far been named.

The sexton – a member of staff responsible for the upkeep of the church – was in his late 40s or early 50s.

Prosecutors are treating the assault as an act of terrorism.

When did the attack happen?

The attack took place on Thursday at about 9am local time (08:00 GMT), and it came just days after thousands rallied across France in solidarity with teacher Samuel Paty, who was beheaded for having shown pupils cartoons of the Prophet Muhammad.

It was not immediately clear if Thursday’s attack was connected to the cartoons, which Muslims consider blasphemous.

Who is behind the attack?

According to reports by French news agency AFP, the man suspected of the attack is a 21-year-old Tunisian who arrived in Europe a few weeks ago, sources close to the inquiry said.

The suspect landed in late September on the Italian island of Lampedusa, where he was placed in virus quarantine by authorities before being released with an order to leave Italian territory.

He arrived in France in early October, sources said.

“The suspected knife attacker was shot by police while being detained. He is on his way to the hospital, he is alive,” Mayor Estrosi told reporters. 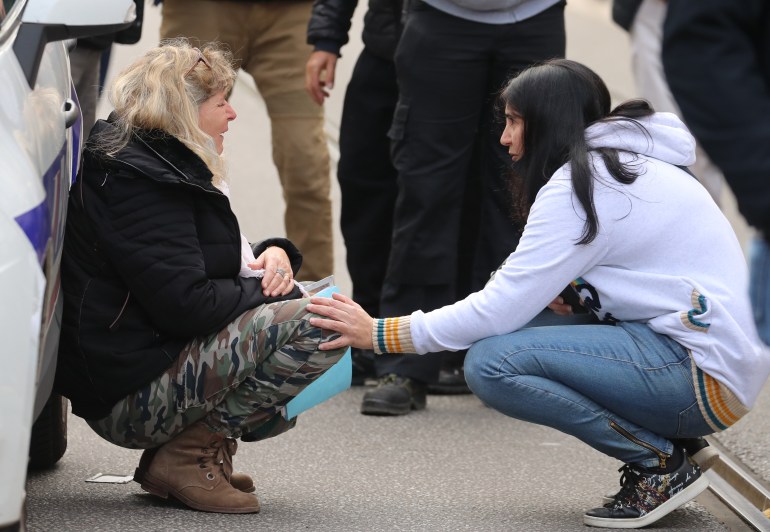 A woman kneels by a police car after the knife attack in Nice [Valery Hache/AFP] Was it only one attack?

Other confrontations and attacks were reported in the southern French city of Avignon where police killed a man who threatened passersby with a handgun.

Shortly after the Nice attack, police in the city of Lyon said they arrested an Afghan who was spotted carrying a 30cm (12-inch) knife while trying to board a tram.

In Saudi Arabia, meanwhile, state television reported a Saudi man was arrested in the Red Sea city of Jeddah after attacking and injuring a guard at the French consulate. The French embassy said the guard was in hospital though his life was not in danger.

Macron announced increased surveillance of churches by France’s Sentinelle military patrols, which would be bolstered to 7,000 troops from 3,000.

“Quite clearly, it is France that is being attacked,” he said. “If we are attacked, it is because of our values.”

Prime Minister Jean Castex raised France’s security alert to its highest level and said the government’s response would be firm and implacable.

In Paris, legislators in the National Assembly observed a minute’s silence in solidarity with the victims. The mayor of Paris, Anne Hidalgo, said the people of Nice “can count on the support of the city of Paris and of Parisians”.

A representative of the French Council for the Muslim Faith strongly condemned the attack. “As a sign of mourning and solidarity with the victims and their loved ones, I call on all Muslims in France to cancel all the celebrations of the holiday of Mawlid.”

The holiday is the birthday of the Prophet Muhammad and was celebrated on Thursday.

World leaders expressed solidarity with France after the attack.