Singer Dame Vera Lynn has died at the age of 103, her family have said.

Dame Vera was fondly known as "the forces' sweetheart" for her morale-boosting visits to the front line to entertain troops during the Second World War.

Some of her best-loved hits included We'll Meet Again and There'll Be Bluebirds Over The White Cliffs Of Dover. Image: Dame Vera Lynn has died at the age of 103

Dame Vera's family said in a statement they were "deeply saddened to announce the passing of one of Britain's best-loved entertainers".

They added she died on Thursday morning "surrounded by her close family". 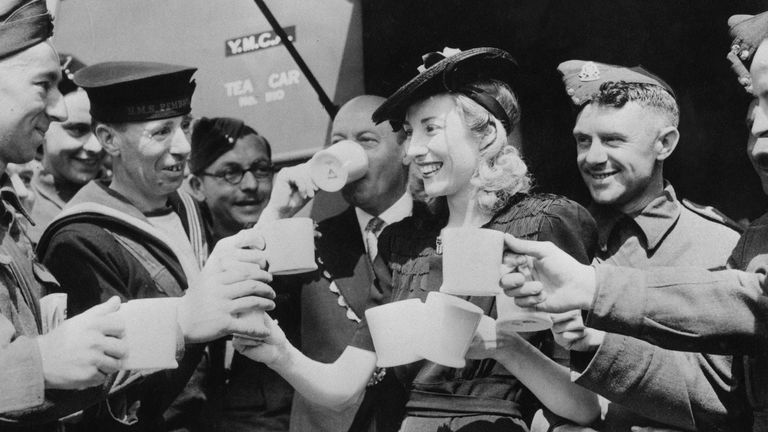 Image: Dame Vera with troops in London in 1942 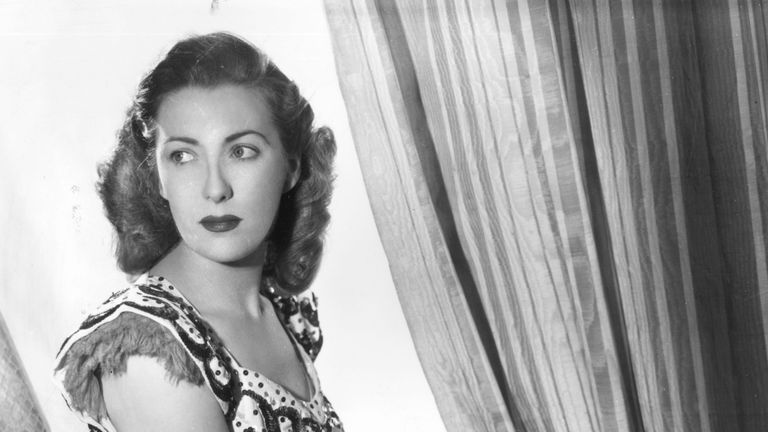 Dame Vera had lived in Ditchling, East Sussex since the early 1960s and she retained a life-long association with the UK's Armed Forces.

Ahead of last month's 75th anniversary of VE Day, she spoke of remembering the "brave boys and what they sacrificed for us".

Dame Vera's visits to entertain troops in the Second World War, while in her 20s, saw her travel thousands of miles.

This included trips to Egypt, India and Burma.

The Queen referenced Dame Vera's lyrics earlier this year when she addressed the nation during the coronavirus pandemic.

She told Britons separated from their loved ones: "We'll meet again." 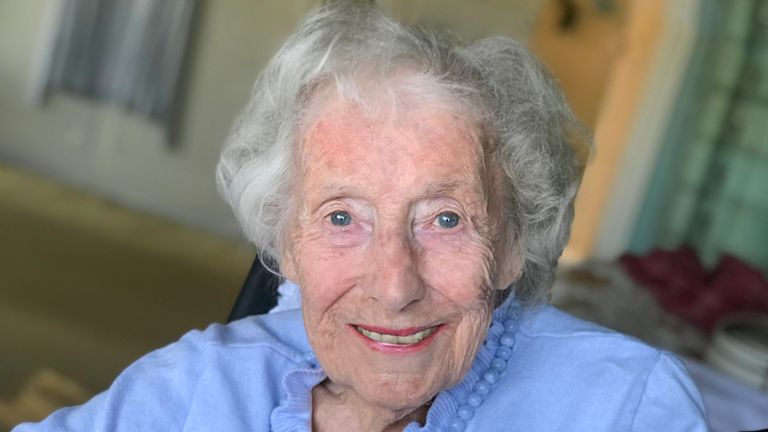 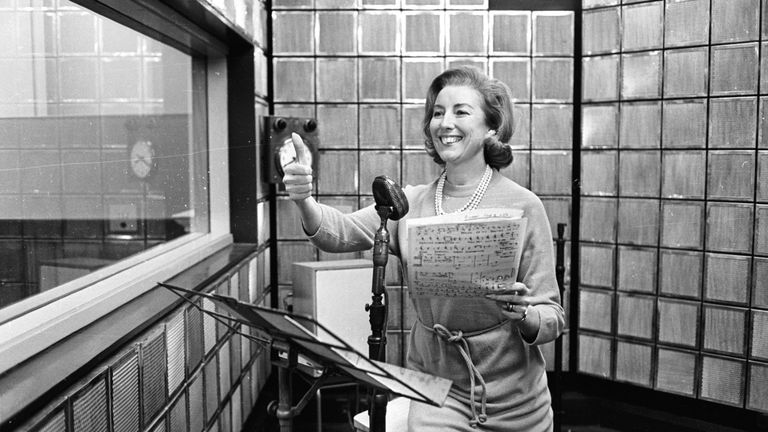 Dame Vera used her 103rd birthday in March to call on the British public to "find moments of joy" during the coronavirus lockdown, as she urged the nation to "keep smiling and keep singing".

Sky News' arts and entertainment correspondent Lucy Cotter said: "This is why she still resonates today, why she still has such a place in people's hearts and why she has spoken to the younger generation."

"It really meant something to people, to the public, that she took the time to speak to them and she tried to understand what people were going through in lockdown and all about that 'Blitz spirit'."

Dame Vera was born in London in 1917 and made her performing debut at an East End working men's club at the age of seven.

At the age of just 15 she was running her own dancing school.

She gained national recognition during the 1930s as she began to sing regularly on the radio and in West End nightclubs.

Dame Vera Lynn’s charm and magical voice entranced and uplifted our country in some of our darkest hours. Her voice will live on to lift the hearts of generations to come.

In 1940 she went solo and the following year she married Harry Lewis, a clarinet and saxophone player who went on to become her manager.

The couple - who remained devoted to each other until Harry's death in 1998 - had one daughter, Virginia.

Responding to the news of Dame Vera's death, Prime Minister Boris Johnson said the singer's "charm and magical voice entranced and uplifted our country in some of our darkest hours".

"Her voice will live on to lift the hearts of generations to come," he added. 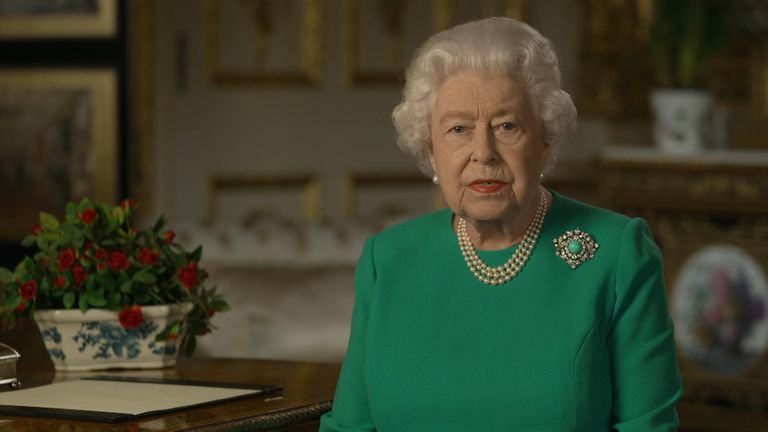 Singer Katherine Jenkins, who performed We'll Meet Again on this year's VE Day anniversary, said: "I simply cannot find the words to explain just how much I adored this wonderful lady.

"Her voice brought comfort to millions in their darkest hours, her songs filled the nation's hearts with hope, and her emotive performances, whether home or abroad, then or now, helped to get us through." Image: Vera Lynn and her daughter Virginia in 1949. Pic: ANL/Shutterstock . 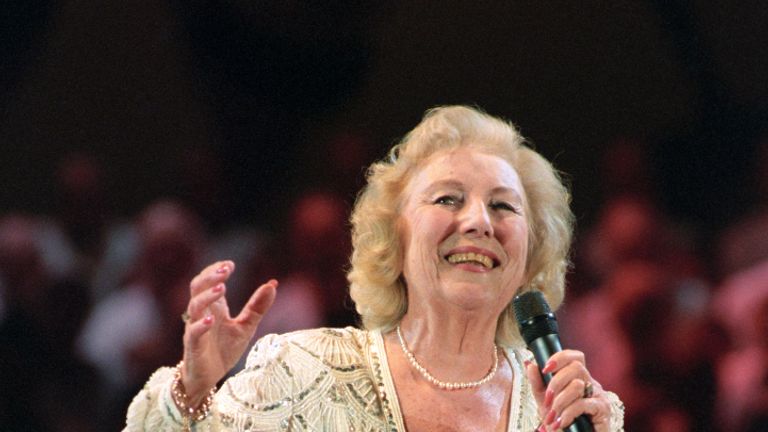 Image: Dame Vera performs on the 50th anniversary of VE Day in 1995

Sir Cliff Richard described Dame Vera as "truly an icon" as he remembered performing with her in front of Buckingham Palace for the 50th anniversary of VE Day in 1995.

"We walked to the stage through a crowd of survivors of that war, and they were reaching out to touch and get a smile from Vera," he said.

"I heard the words... 'God bless you'... 'Thank you'... 'We love you' for their very own Forces' Sweetheart! A great singer, a patriotic woman and a genuine icon."

The twitter account of Captain Sir Tom Moore, a fellow centenarian who has raised millions for the NHS during the coronavirus crisis, posted: "A real shame, I really thought Vera Lynn would live longer she's been speaking so well on TV recently.

"She had a huge impact on me in Burma and remained important to me throughout my life." 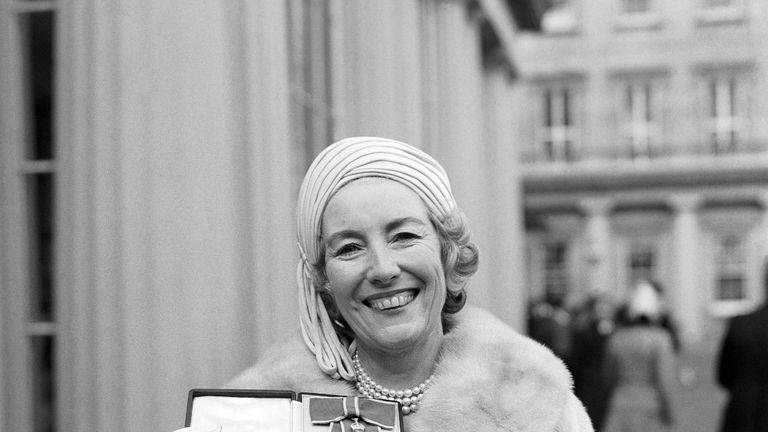 Image: Ths singer outside Buckingham Palace after receiving her damehood in 1975

Dame Vera had an association with many charities including her own Dame Vera Lynn Children's Charity, which helps young children with cerebral palsy and other motor learning difficulties.

Her daughter Virginia Lewis-Jones, who is the charity's vice president, said: "She set out to change people's attitudes towards the disability and help children reach their full potential.

"There was no-one else raising funds to help at that time, so it was groundbreaking work."

The Royal British Legion described Dame Vera as an "unforgettable British icon" and a "symbol of hope to the Armed Forces community past and present, and much loved longstanding Legion supporter".

SSAFA, the Armed Forces charity, tweeted: "Her work with the forces community spanned a lifetime and she will always be remembered as the original Forces' Sweetheart."