Rio de Janeiro, Brazil – Every week, Ezequiel Dias, an urban farmer, knocks on the doors of his community’s red-brick, makeshift houses with a delivery of fresh sweet potatoes, pumpkins, onions, cabbage and herbs.

He checks to see if the families require additional help. Some need facemasks, others need soap. But few are hungry. Many of his neighbours – the majority of whom are informal workers, who make up approximately 60 percent of Rio de Janeiro’s labour force, with little-to-no savings – have been unable to work during the COVID-19 pandemic.

The 44-year-old Manguinhos resident knows the grim reality well. Many years ago, he too was at rock bottom. “I was unemployed for five years, helpless, with my family at home to feed,” he told Al Jazeera.

“Then suddenly, the Manguinhos vegetable garden project appeared and turned my life around,” he added.

The Horta de Manguinhos project (Manguinhos vegetable garden), an urban agriculture initiative and Latin America’s largest community farm, is helping at least 800 families survive the coronavirus outbreak, as well as employing more than 20 local workers at a time when Brazil grapples with a pandemic-battered economy. 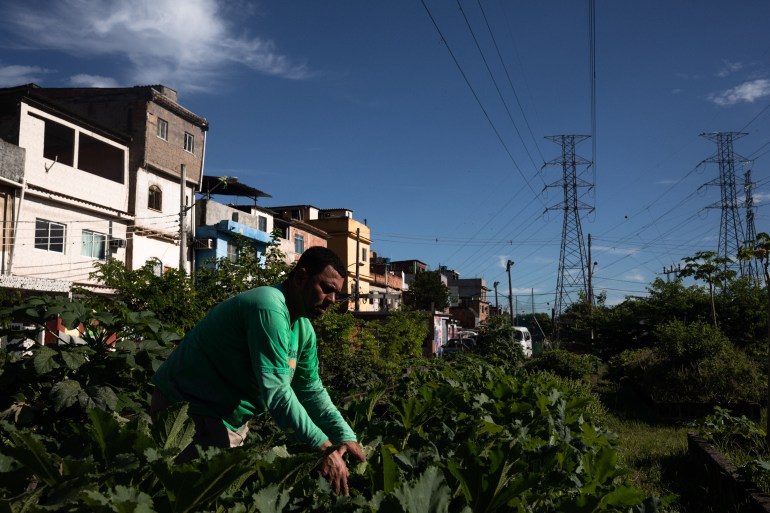 Ezequiel Dias was unemployed for more than five years before he was offered the opportunity to work on the farm [Ian Cheibub/Al Jazeera]Dias, who has been employed by the project since it launched in 2013, is now providing seeds of hope to many of the 32,000 residents of Rio’s North Zone Manguinhos complex, one of the city’s poorest clusters of favelas.

According to a 2015 study by Brisbane’s Griffith University, the demographics and standard of poverty in the area are bleak.

More than 15 percent of teenage women have children and in some areas, unemployment is more than 50 percent, making Manguinhos’s Human Development Index as little as 0.65 percent, among the five lowest in Rio de Janeiro, said the report, which was conducted between 2010 and 2015.

‘Our lives are always a fight’

Hortas Cariocas, which founded the Manguinhos vegetable garden project, is one of the few municipal-led social development initiatives that aim to alleviate poverty in communities like Manguinhos. The project was founded to solve food insecurity, boost the local economy and provide fresh, affordable food to residents who would often go weeks without meat or vegetables.

“When we wanted to create the farm 15 years ago, the first thing we thought was that the poor can’t afford to eat organic. The poor need to eat organic, without having to spend a fortune in the supermarket,” explained Julio Cesar Barros, creator of the Hortas Carioca Project. 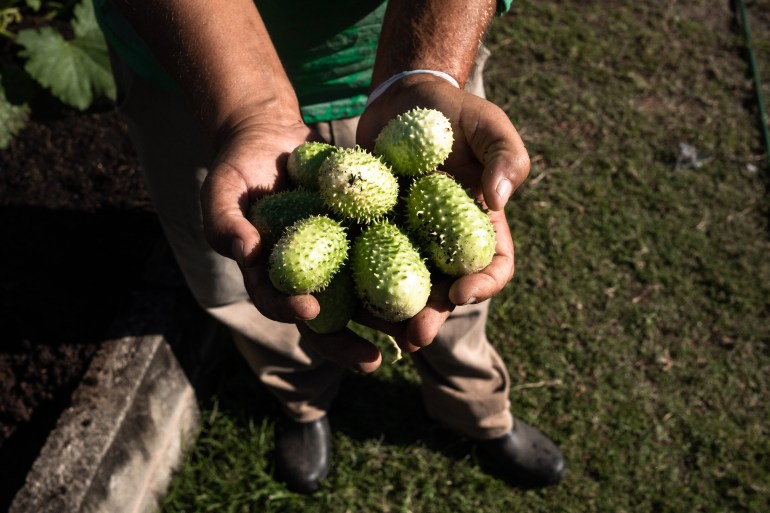 Horta Manguinhos is helping local residents to eat organic without having to spend their monthly wages at the supermarket [Ian Cheibub/Al Jazeera]In collaboration with the Manguinhos Residents Association and with municipal and federal funding, the project supplies workers with training, basic equipment and enough food to take home to their families weekly. In accordance with its guidelines, they must also distribute part of the produce to at-risk members. The rest is sold commercially to Brazilian distributors.

As the COVID-19 pandemic took hold, commercial trading was suspended on March 27 last year to ensure the two tonnes of monthly produce feed as many struggling local families as possible.

“Today I live from this farm,” said Dias, the farmer. “Given that we are a poor community with countless socioeconomic problems – where access to proper sanitation, employment and education is often a struggle – our daily lives are always a fight. But thank God we have managed to survive this pandemic. This farm has kept our community alive.”

The employees also believe the educational and social tools provided by the farm are just as important as the production itself.

“This farm fell from the sky. It has meant that my family has not gone hungry this year,” 69-year-old Diane da Silva, a farmworker and grandmother who has worked on the site since 2013, told Al Jazeera. Given that many women in Rio de Janeiro’s favelas often support their families alone, she said her family might not still be standing had it not been for the project. 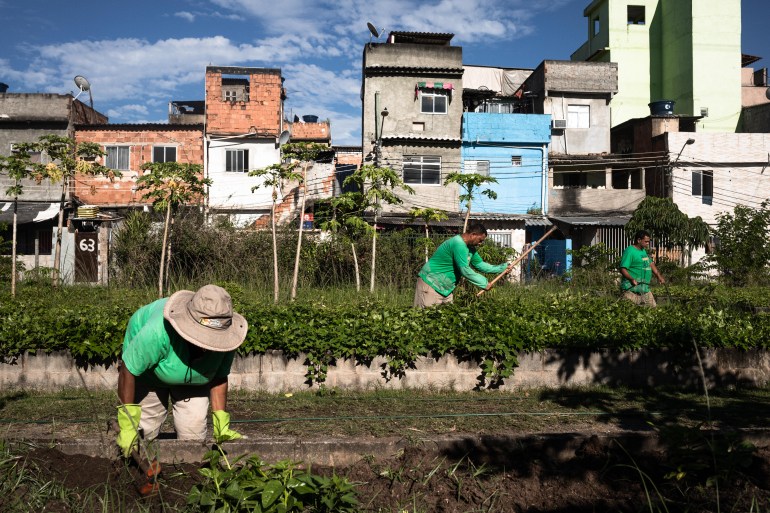 During the COVID-19 pandemic, workers have distributed two tonnes of monthly produce to local families, as well as brought about three bags of fresh vegetables and herbs to their homes weekly [Ian Cheibub/Al Jazeera]In a country where the use of agrochemicals has soared under Brazilian President Jair Bolsonaro, the farm has also taught the urban gardener how to lead a healthier life. “Before, I did not know that vegetables and herbs without pesticides existed,” she said.

Cesar Barros believes that offering residents local opportunities could help generate a shift away from violence and crime that has plagued favelas.

“Some of our employees were involved in drugs and crime before. This is why we say that the project’s surname is rescuing lives,” said Cesar Barros.

The Manguinhos vegetable garden project is particularly important given the favela’s turbulent past of drug trafficking and violent shootouts.

Previously under the control of the Red Command drug lords, for decades residents lived in a state of perpetual violence where public shootouts between traffickers, rival factions and state military forces were the norm. In 2012, State Pacification Police Units invaded the favela with 1,300 troops, helicopters and tanks. 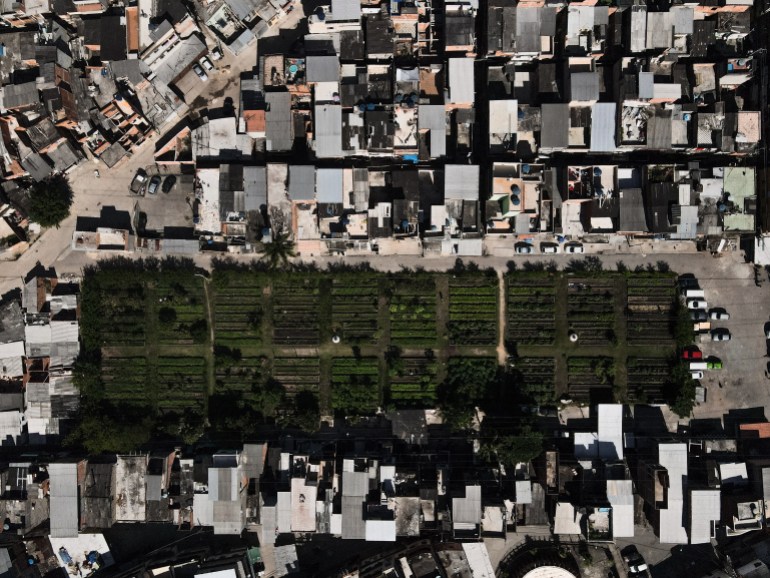 The Horta de Manguinhos project is an urban farm in what was once a drug-plagued favela in Rio de Janeiro [Ian Cheibub/Al Jazeera]Following pacification, the city bulldozed a dilapidated piece of land the size of four football pitches that was formerly one of Rio de Janeiro’s largest “Cracklands”. While many criticise the pacification’s brutality, others believe the Manguinhos farm has been one of its success stories, painting a brighter image and better quality of life for its citizens.

“If you would have come to this space before, you would have run away. There were drug addicts smoking crack 24/7. It was unbearable,” said Erivaldo Lira, president of the Manguinhos Residents Association.

Before the Manguinhos vegetable garden project existed, the favela residents who lived above the original site of the urban farm would encounter dismal conditions. Improving the quality of life does not have a price, said Lira’s business partner, Cesar Barros.

“We’ve taken Manguinhos from the violent police pages and put it on positive pages. We’ve transformed an extremely toxic area to a source for good. People ask: Isn’t safety a concern here? My response is always: food security is security. That’s what matters,” he added.

With unemployment soaring during the pandemic and after 300 Brazilian real ($52.85) emergency monthly cash payments ended in December, residents often say they fear hunger more than the virus itself. 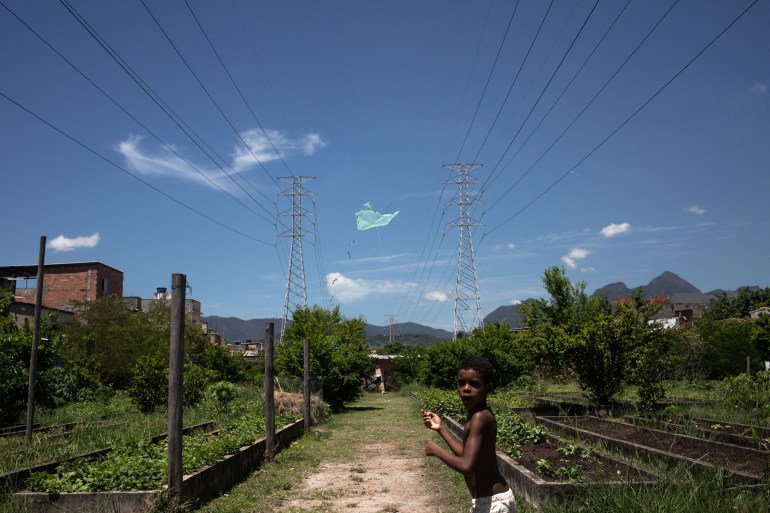 Local children play and roam free in the gardens [Ian Cheibub/Al Jazeera]Environmentalists say Manguinhos is a symbol for the scope of urban-architectural initiatives that are likely to spout up in the city in the coming years.

“With other smaller-scale urban farming projects, we already produce more than 80 tonnes of produce which benefits over 20,000 families. And the initiatives keep coming,” Eduardo Cacaliere, the city of Rio de Janeiro’s environment secretary, told Al Jazeera.

“To support food security for as many families as possible, we are committed to expanding the vegetable garden programme, with great care and considering the severe budget restrictions by the City hall. The Manguinhos vegetable garden project expresses the success of these projects.”