Florida is the true US presidential election bellwether state

With a population of more than 21 million people, Florida is the nation’s largest swing state – and given its geographic size, rapid growth and sprawling diversity, it is also one of the least predictable.

While the nation’s top two most populous states – California and New York – are expected to be easy wins for Democrat Joe Biden, Florida – the third-largest – is a true wild card, making it one of the most sought-after states for presidential candidates.

“With 29 electoral college votes, Florida really is the big prize,” said Richard Mullaney, director of the Jacksonville University Public Policy Institute. “It’s really pretty stunning when you see how close the races have been here over the last 20 years.”

Florida has a track record of predicting future presidents. Since 1996, every presidential candidate who has succeeded in Florida has gone on to spend the next four years in the White House. The state swings harder than a well-greased door hinge: in these six contests, Floridians have chosen exactly three Republicans and three Democrats. 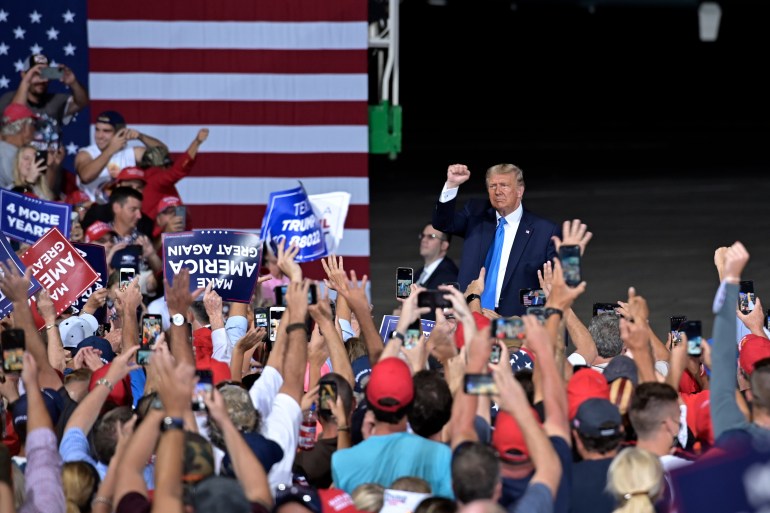 President Donald Trump acknowledges supporters after a campaign rally in Jacksonville, Florida [Stan Badz/AP Photo]While both candidates are making a pitched battle for the state’s voters, victory in Florida is far more crucial to Republican Donald Trump’s strategy than Biden’s. Losing Florida would require Trump to sweep several other battleground states to make up for the loss.

Trump achieved this four years ago, but Biden appears to have a stronger grip on the electoral map than his predecessor, Hillary Clinton, did in 2016. Historically, no Republican candidate since Calvin Coolidge, nearly a century ago, has gone on to win the presidency without Florida.

Florida is a true toss-up

For the past 20 years, every presidential election in Florida has been a nail-biter, particularly in 2000, when the vote count was so close that a Democratic challenge to the results had to be sorted out by the US Supreme Court. Of nearly six million votes cast in Florida, Republican George W Bush beat Democrat Al Gore by just 537 votes that year.

The outcome this November may not be that tight, but polling suggests a close race ahead. Although Biden held a steady polling lead of four percentage points over most of the summer, Trump has narrowed the gap in the past few weeks. Biden currently enjoys only a 1.3 percentage point lead over Trump, according to averages of state polls compiled by Real Clear Politics.

In 2016, Trump edged out Clinton by less than 2 percentage points.

Despite strong national Democratic gains in the 2018 midterm elections, Floridians elected Republicans in statewide gubernatorial and Senate elections that year, but the results were narrow: both elections were decided by less than a single percentage point. Those margins were similar to the presidential election in 2012, when President Barack Obama defeated Republican Mitt Romney by just 74,000 votes.

Florida is one of the most complicated and expensive regions in the US to run a state-wide campaign. In broad strokes, the state’s northern reaches vote red and its populous cities in the south tend blue. Florida’s centre, particularly along the so-called I-4 Corridor that connects Orlando and Tampa, is a sea of purple, where millions of voters are known to swing between Republicans and Democrats.

“Winning Florida means navigating different cultures, languages, and economic realities,” Steve Schale, a veteran Democratic operative in Florida, wrote in 2016. “It requires both turning out your base and persuading … ideologically and culturally diverse swing voters.”

Trump’s success four years ago in Florida resulted from support from the state’s suburban areas, combined with high enthusiasm in rural regions. While Clinton dominated Florida’s cities, it was Trump’s support in the surrounding suburbs that helped him eke out the win. But polling data suggest Biden could be chipping away at Trump’s past suburban strength, particularly among college-educated white voters, which would force Trump to find increased support elsewhere.

Most Florida residents have come from other parts of the US, or even the world – more than 20 percent of Florida’s population is foreign-born.

The state is home to millions of Latino voters, a catch-all term that describes a diverse population whose ancestry hails from dozens of Spanish speaking countries, particularly Cuba, Colombia, Mexico and, increasingly, Venezuela and Nicaragua. Florida also has a growing population from Puerto Rico, an American territory.

While Biden is expected to win a majority of these Latino voters in Florida, polls show Trump may be cutting margins out of the Democratic lead. Trump has aggressively courted the state’s Republican-leaning Cuban population, announcing in September renewed restrictions on buying goods that financially benefit the island nation’s communist regime from which they fled. 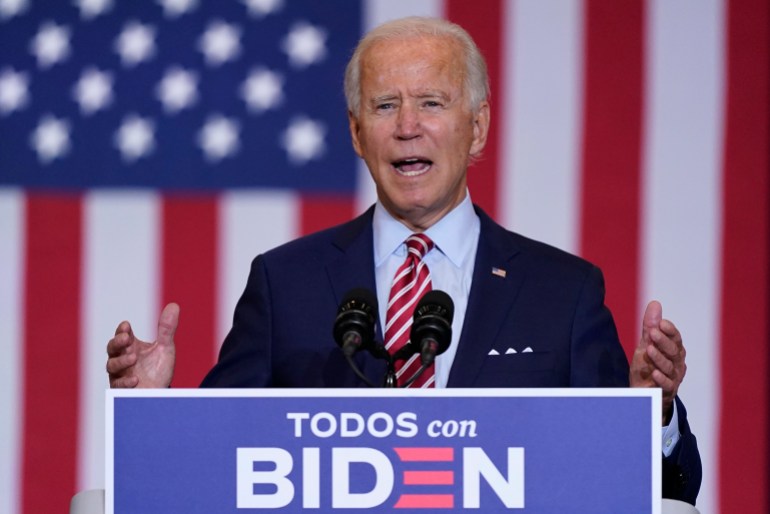 “We have the power to swing the vote here in Florida. This is one of the biggest minority voting blocs,” Poder Latinx Florida state director Nancy Batista, told Al Jazeera. “We’re not monolithic, so there’s different messaging that needs to be tailored to each one of our communities.”

Trump’s Florida-based campaign has embarked on an ambitious effort to visit voters directly at their homes to urge them to support the president’s re-election. Combined with an aggressive push to register voters in person and by mail, the Trump campaign has added tens of thousands of registered Republicans to the state’s voter rolls.

While Florida remains a state with more registered Democrats than Republicans, the campaign’s efforts this year have narrowed that gap substantially. According to an analysis of Florida Division of Elections data conducted by Politico, 58,000 people registered as Republicans in August alone, 41 percent more than Democrats.

Biden visited Florida in September, making a stop in Tampa, a key swing area of the state. Biden’s wife, Jill, plans to conduct a bus tour through Florida with supporters from the Congressional Black Caucus to encourage voter turnout in the state. His campaign has spent $63.7m on Florida television advertisements, outpacing Trump’s spending of $57.5m, according to The New York Times.

Biden’s campaign has also had an assist from former Democratic primary campaign rival Mike Bloomberg, who has pledged to spend $100m on Biden’s behalf in Florida. On Friday, Bloomberg announced a $40m television advertisement buy and recently partnered with a local group to use $16m to restore voting rights to convicted felons, which could help give Biden a slight edge.

In a state with historic election outcomes as close as Florida’s, even a small increase in a key voting population can make the difference in November.

“It’s really hard to predict this one,” said Mullaney. “It could go either way.” 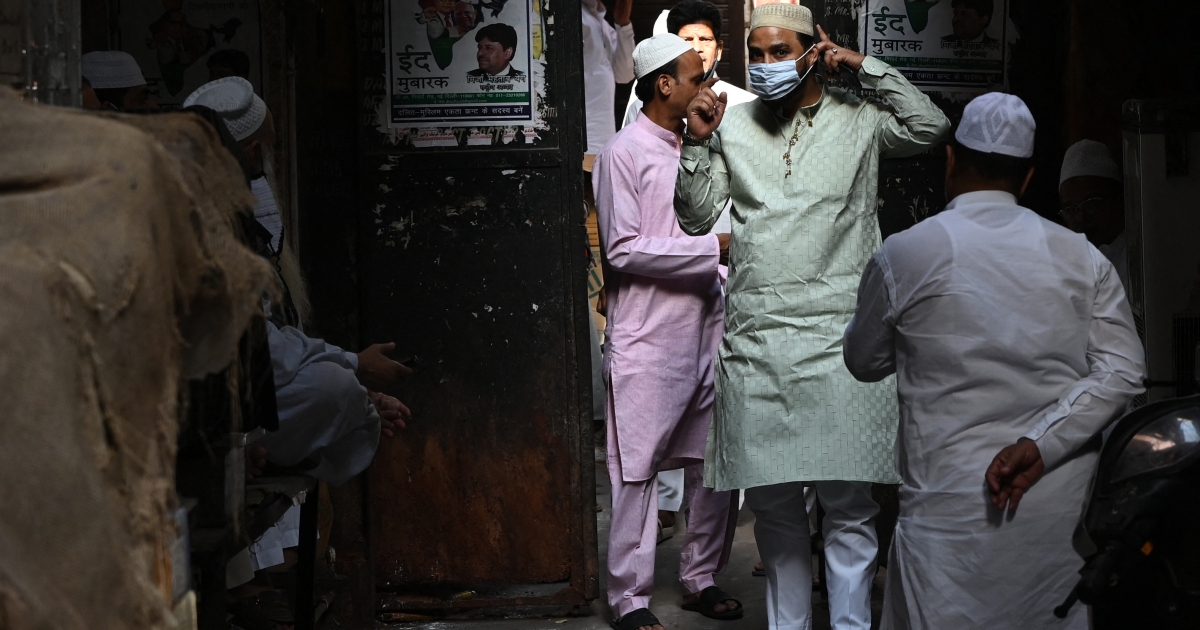