Fishing, dredging and other damaging activities could be completely banned from areas of England's coastal waters following the results of an independent review commissioned by the government.

The report by former fisheries minister Richard Benyon recommends a minimum of five pilot sites are set aside as Highly Protected Marine Areas (HPMAs) without delay, to ensure ocean ecosystems can recover to their former pristine state.

But under the proposed HPMAs no extractive or destructive activities would be allowed and ships would only be able to pass through.

Mr Benyon, who praised Sky News for its campaign, said: "This isn't just about protection, it is about recovery.

"Our marine environment is not in a good state. We've got pollution, climate change and acidification.

"This is an opportunity for the government to be a world leader in how we protect our seas."

Flamborough Head, Yorkshire, and part of Lundy Island in the Bristol Channel are the only no-take zones in English waters, together accounting for less than two square miles of sea.

The new HPMAs would be considerably larger, but Mr Benyon said fishermen have nothing to fear.

"The fishing industry can benefit from the large amount of fish and shellfish that spill out into neighbouring areas of water and can be sustainably exploited," he said.

"There is a sweet spot, if we can get it right, where everybody benefits."

Sky News followed UN Patron of the Oceans Lewis Pugh as he swam the length of the English Channel in 2018, the first person to do so.

He was met on the beach at Dover by Michael Gove, environment secretary at the time, who subsequently commissioned the review of marine protection. 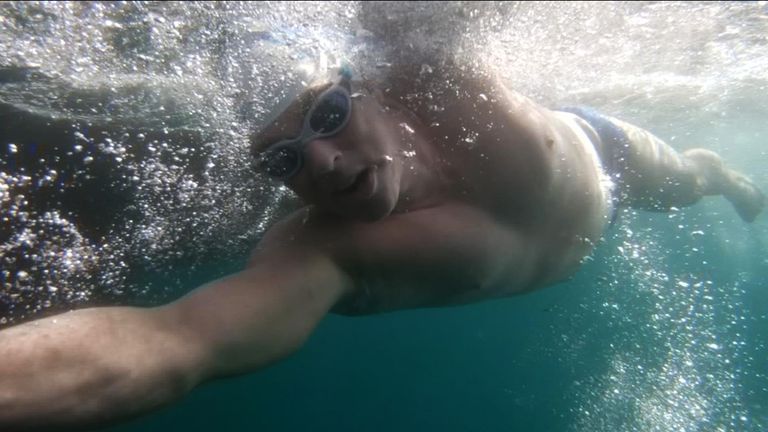 Pugh said the report was a significant step forward for England's coastal waters. But he said there must not be further delay.

"There is so much science on the importance of highly protected marine areas and yet the government still insists that we must have this pilot project of five of them in the waters around England.

"My message to the government is please stop dipping in your toes. Dive in with enthusiasm. These things work.

Although a "blue belt" of marine protected areas surround the coast, they only protect key features such as reefs or seagrass rather than the entire ecosystem.

Marine biologists have strongly criticised them as "paper parks" because they look good on a map, but do little to protect the ocean.

Marine life is likely to bounce back swiftly in response to improved protection.

Conservation charity The Seahorse Trust said this spring divers had recorded the highest number of spiny seahorses in Studland Bay, Dorset, since 2008.

It says because of the COVID-19 lockdown no boats have been allowed to anchor in the seagrass beds where they breed.

The charity wants Studland Bay to become one of the HPMA pilot sites to guarantee permanent protection.

The government has committed to meeting the UN target of protecting 30% of its waters by 2030.

:: Sky's Ocean Rescue campaign encourages people to reduce their single-use plastics. You can find out more about the campaign and how to get involved at www.skyoceanrescue.com.