Some of the asylum seekers have been there more than a year due to immigration rules set by former President Trump.

The first asylum seekers from a Mexican border camp that had become a symbol of Trump-era immigration restrictions entered the United States on Thursday under a new policy meant to end the hardships endured by migrants in dangerous border towns.

The UN’s International Organization for Migration (IOM) said the initial group comprised 27 people who had been living in the makeshift camp in Matamoros opposite Brownsville, Texas.

Some residents have lived there for more than a year under former President Donald Trump’s controversial Migrant Protection Protocols (MPP) programme requiring asylum seekers to wait in Mexico for US court hearings.

A new process under President Joe Biden will gradually allow thousands of MPP asylum seekers to await courts’ decisions within the US. Some asylum seekers last week were permitted to cross into San Ysidro, California. 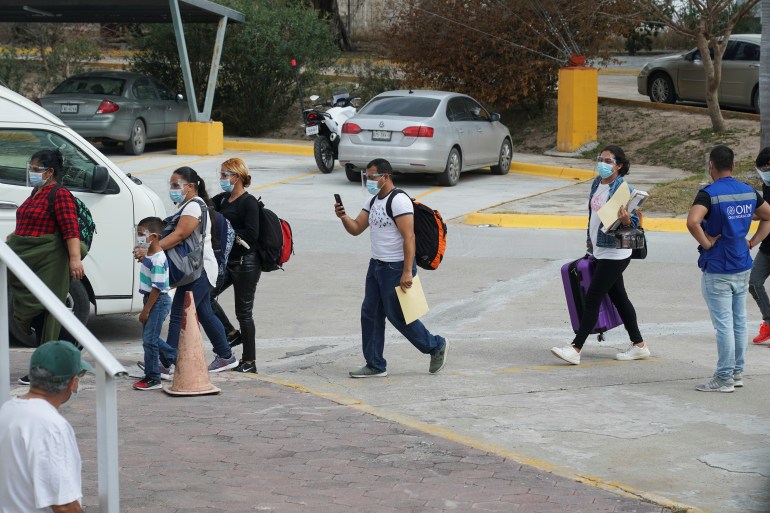 The first group of 27 asylum seekers leave their camp towards the Gateway International Bridge to be processed and seek asylum in the US, in Matamoros, Mexico, February 25, 2021 [Go Nakamura/Reuters]Francisco Gallardo, who runs a migrant shelter in Matamoros and provides humanitarian aid at the camp, welcomed the news that the process had begun in Matamoros, but said it should have come sooner.

“It’s good that they are doing it, but unfortunately coming late,” he said.

Freezing temperatures at the US-Mexico border had made the Matamoros camp a priority, the Department of Homeland Security said on Wednesday.

Asylum seekers at the camp have struggled to ensure proper hygiene and to protect themselves from organised crime in a state that is one of the most violent in Mexico.

“The camp was a space that had multiple risks for the migrants,” said Misael Hernandez, a researcher on migration issues at the Colegio de la Frontera Norte.

Mexico’s migration institute did not immediately respond to a request for comment.