Fight for $15: US retailer Costco raises its hourly wage to $16

The majority of Americans support the idea of more than doubling the minimum wage to $15 per hour, a new Reuters/Ipsos poll found.

Costco Wholesale Corp is raising the minimum wage for its hourly staff to $16 from next week, a dollar more than what its competitors Amazon.com Inc and Target Corp pay per hour and more than double the current United States federal hourly minimum wage of $7.25.

The membership-only retailer’s move comes as United States President Joe Biden plans to raise the minimum wage to $15 per hour by 2025, and a week after rival Walmart Inc raised its hourly wage to an average of $15.

Costco’s Chief Executive Officer Craig Jelinek made the announcement at a US Senate Budget Committee hearing on worker wages at large companies.

“It takes a lot of time to interview, find employees, lot of labour involved just trying to hire individuals. We want people to stay with us,” Jelinek said, answering to Senator Bernie Sanders, who chairs the Senate Budget Committee.

The majority of Americans support the idea of more than doubling the minimum wage to $15 per hour. A new Reuters News Agency/Ipsos poll found that 59 percent of respondents said they supported the idea, with 34 percent opposing it. 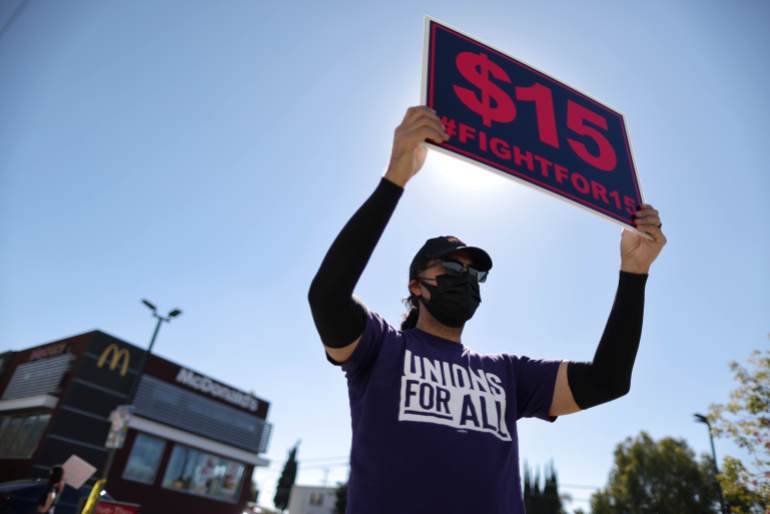 A man holds up a minimum wage sign at a rally held by fast-food workers and supporters in Los Angeles, California, the United States [File: Lucy Nicholson/Reuters]When told that “raising the minimum wage should lift some families out of poverty, but government economists also expect it could eliminate some low-income jobs, potentially making some families worse off,” 55 percent of respondents said they supported it.

About 40 percent of American adults said that they would benefit – either personally or through a member of their family – if the US raised the federal minimum wage, the survey found.

Based in Issaquah, Washington State, Costco has over 180,000 employees in the US. The retailer has seen sales boom during the COVID-19 pandemic as consumers stocked up their pantries.

The company, which raised hourly wages to $15 in 2019, also offered premium pay to workers during the virus outbreak.

“In my past experience, wages usually don’t put people out of business; how you run your business will put you out of business,” Jelinek said at the hearing.

But as big corporations raise their hourly wages, many small businesses opposed a $15 federal minimum wage, saying it would lead to job cuts and closures.

The minimum wage debate is also part of broader negotiations over the next round of US coronavirus relief aid. Senate Democrats are currently awaiting a ruling on whether they can tuck the $15-per-hour measure into the proposed $1.9 trillion COVID-19 relief bill.

Democrats, who narrowly control the House of Representatives and Senate, are trying to pass the progressive policy without Republican votes through a manoeuvre known as reconciliation, which allows them to act with just a simple 51-vote majority rather than the chamber’s normal 60-vote requirement.

The Senate’s parliamentarian on Thursday is expected to decide whether the rules will allow lawmakers to use the coronavirus spending bill to enact a sweeping wage policy.

Even if Senate Parliamentarian Elizabeth MacDonough rules that the minimum wage can be passed through reconciliation, it will not change the fact that the proposal faces an uphill battle in the Senate.

Democrats are not united in support, with two of their number — Joe Manchin of West Virginia and Kyrsten Sinema of Arizona — against the idea.

There is broader support in the Senate for raising the minimum wage by a lesser amount, and not through reconciliation.