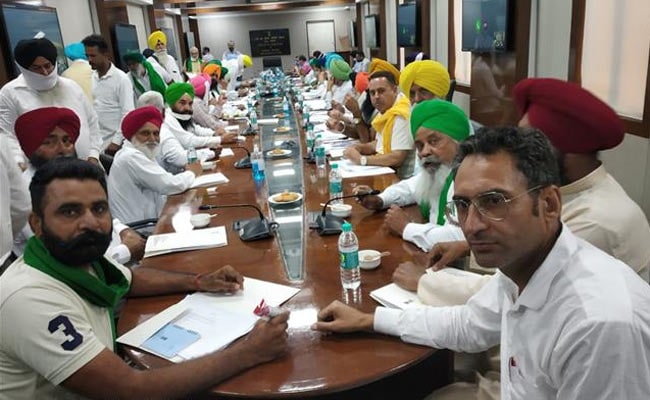 A meeting of  30 protesting farmers' groups in Delhi with the Centre ended abruptly today over the absence of the Union minister for agriculture. The meeting was being held with the agriculture secretary but the farmers were demanding the presence of Union minister Narendra Singh Tomar.

The farmers' groups, which have been on warpath for months over the contentious farm bills, had decided yesterday to hold talks with the Centre. The decision was taken by representatives of 29 farmers' groups at a meeting in Chandigarh.

The Bharatiya Kisan Union, or BKU (Ugrahan), which did not attend meeting, had also decided to participate in the meeting called by the Centre in New Delhi.

"Our three members will participate in the meeting in Delhi," BKU (Ugrahan) general secretary Sukhdev Singh Khokrikalan was quoted as saying by news agency Press Trust of India.

Under the new laws, the farmers are allowed to sell produce anywhere in the country and deal directly with big corporates -- a situation that the farmers have found alarming.

Most feel they would be left at the mercy of the corporates and with the phasing out of agricultural wholesale APMC markets, will not get even the Minimum Support Price for their produce.