Former Hollyoaks actress Gemma Atkinson has revealed she received abuse online about her weight after old episodes of the soap were aired recently.

The former Strictly Come Dancing contestant portrayed character Lisa Hunter in the soap from 2001 to 2005 after joining the show as a teenager.

Atkinson, who is now a radio presenter, said people had messaged her on social media after past scenes were broadcast on Channel 4 to mark Hollyoaks' 25th anniversary, with one man telling her she was "fat" when she appeared on the show. 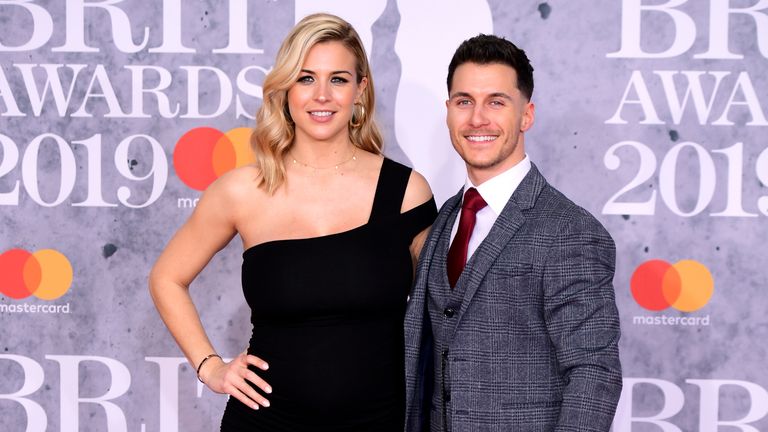 Image: Gemma Atkinson was a contestant on Strictly Come Dancing, where she met partner Gorka Marquez

"For Hollyoaks turning 25 years old, they've been re-running some episodes, and they've had a week of my episodes, and people have actually DM'd me," she told the Women's Health Going For Goal podcast.

"A guy DM'd me, and he said: 'Wow, I never realised at the time, but you were fat in Hollyoaks weren't you?'

"I went back to him and I said: 'Well, I was 15, so I was chubbier than what I am now, but please, please don't let your daughter think that that's your idea of fat. She will have problems for the rest of her life if that's the case.'"

Atkinson, a mother-of-one, admitted she is worried about her daughter growing up in today's world, telling the podcast: "One of my biggest fears for Mia growing up, especially in the environment we're all in now, with the Instagrams and the filters and the quick fix, these jabs and pills and stuff.

"It terrifies me that she'll come to me and say: 'Mum, I've read that if I do this injection it will make me thin.'"

Atkinson reached the final of Strictly Come Dancing in 2017, where she met her partner Gorka Marquez.

On the show, she was partnered with Aljaz Skorjanec, while Marquez performed with singer Alexandra Burke.