Bogota, Colombia – One of Colombia’s most notorious ex-rebel leaders has sent an open letter to the United States Congress to ask for help with the implementation of Colombia’s peace agreement.

Rodrigo Londoño, better known by his nom de guerre Timochenko, was a leader of the leftist Revolutionary Armed Forces of Colombia (FARC), a fighter group that waged a 50-year-long war against the Colombian government.

He now heads a political party – Comunes – formed by the demobilised FARC under the 2016 peace deal, signed under the previous government of Juan Manuel Santos.

In the letter, Londoño highlights the continued killings of ex-fighters, social leaders and other issues halting peace implementation. He asks the US Congress to “again call on the government of Colombia to make a final decision to implement the Peace Agreement in a comprehensive way” and “ to begin the promising process of developing our country to embrace lasting proposals to eradicate drug trafficking, modernize the territory and protect life”. 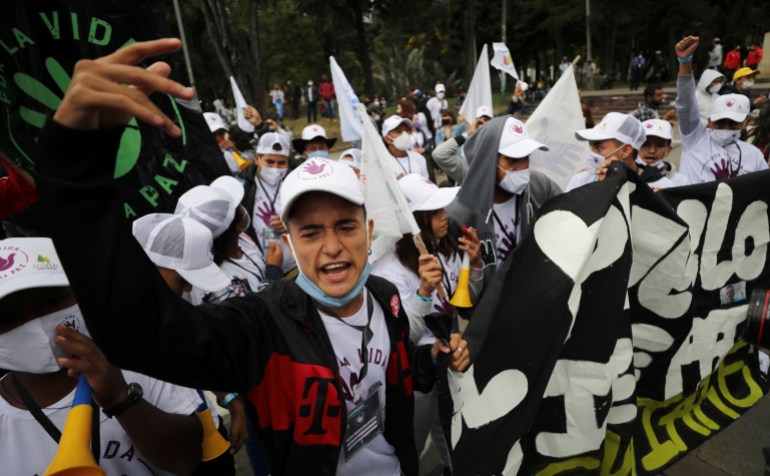 Ex-fighters of the disbanded FARC and social activists march to demand the government guarantee their right to life and compliance with the 2016 peace agreement, in Bogota, Colombia [File: Fernando Vergara/AP Photo]Staunchly opposed to many aspects of the peace agreement – especially lenient punishments for ex-FARC fighters – right-wing President Ivan Duque came to office in 2018. In a controversial, and unsuccessful move, he tried to amend key aspects of the deal in his first year.

After the 13,000 FARC fighters left their weapons and remote territories, other armed groups moved in and now vie for control of the profitable drug trafficking routes and carry out other illegal activities, such as gold mining. Some are controlled by FARC dissidents, who opposed the peace deal, others by existing fighter group the Marxist National Liberation Army (ELN) and the right-wing Clan de Golfo drug cartel.

Violence has increased dramatically in the last two years, not only against ex-FARC fighters trying to integrate into civilian life, but also against environmental defenders and human rights activists, many of whom attempt to defend their land from the violence related to illegal mining and drug trafficking.

INDEPAZ, a Bogota-based peace think-tank, says 261 ex-fighters have been killed since signing the peace deal. It recorded 64 killings of demobilised FARC fighters in 2020. So far this year, 12 of them have been killed. In 2020, it recorded 310 human rights activists or community leaders killed, and 34 so far in 2021.

Impunity rates are sky high and government statistics on killings are much more conservative.

Londoño’s letter also suggests what he believes needs to be done to improve things in terms of peace.

He says it is necessary to provide more protection to those who signed the peace deal and human rights defenders, as well as the end to “constant attacks” on the transitional justice system and an increase in government presence and more economic opportunities in rural areas.

“This includes subsidizing land for Colombian peasants and ex-combatants,” he wrote.

“There is no doubt we’re fulfilling the implementation,” Emilio Archila, the presidential adviser charged with overseeing the peace agreement’s implementation, said in a press statement.

Archila says the letter ignores the government’s progress in work with victims, the substitution of illicit crops and “the gigantic advances” in rural development programmes.

For Gimena Sanchez, Andes director of pressure group Washington Office on Latin America (WOLA) the letter is a reassertion of the ex-fighters’ commitment to peace. 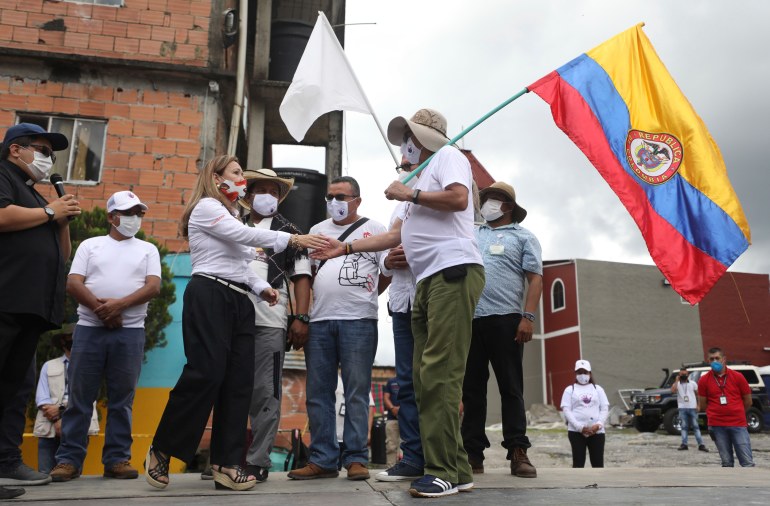 Rodrigo Granda, right, a former rebel commander and member of the FARC political party, shakes hands with Rocio Lopez, sister of two kidnap victims, who were eventually released[File: Fernando Vergara/AP Photo]“Given the key role the US plays in Colombian politics, this is a plea for intervention to get peace back on track before it’s too late,” she said.

“However, the slowness of implementation and other obstructions by the Duque government is leading to the murder of former combatants and social leaders,” Sanchez told Al Jazeera. “This blows a hole in the Colombian government’s international PR efforts concerning peace.”

Sanchez said the government’s strategy to control new violence through militarisation in areas where the FARC moved out is not working and that more attention needs to be placed on crop substitution programmes, to move rural farmers away from illegal coca production – the raw ingredient for cocaine.

Political analyst Sergio Guzman believes the Biden administration will put a lot of pressure on the Colombian government.

Guzman believes the move by Londoño may be trying to legitimise himself as the leader of the FARC political party and that is realising how important the US’s role is in Colombian politics.

“If anything this letter is a sign [Londoño] realises the US is a major player when it comes to Colombia’s internal politics.” 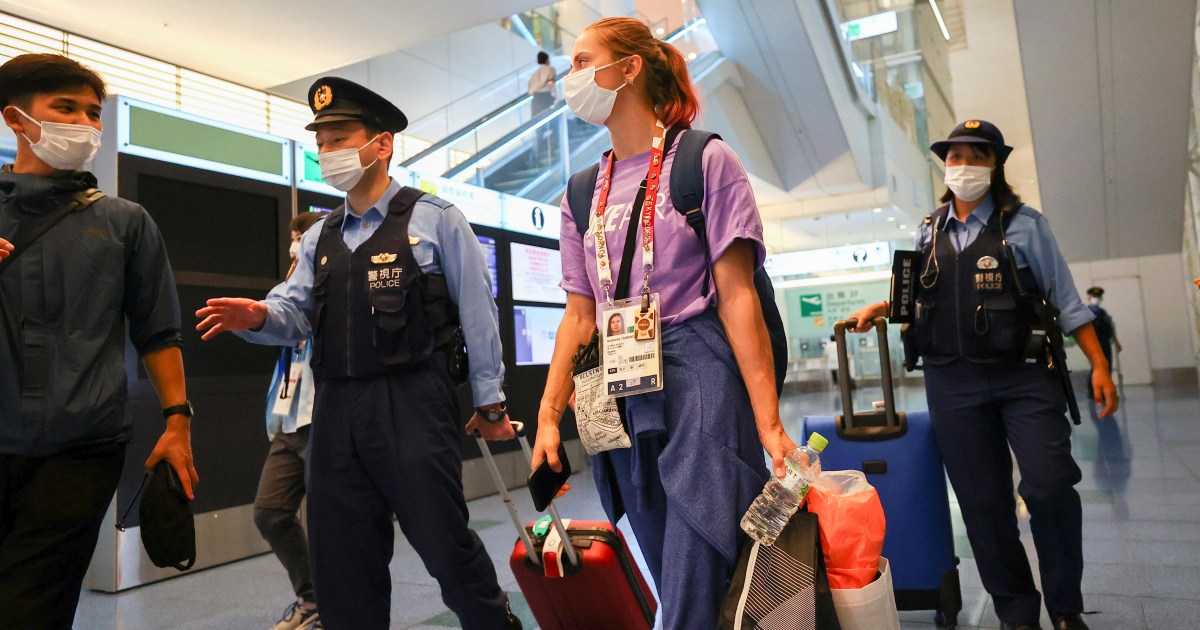 Belarus Olympic athlete says taken to airport against her wishes 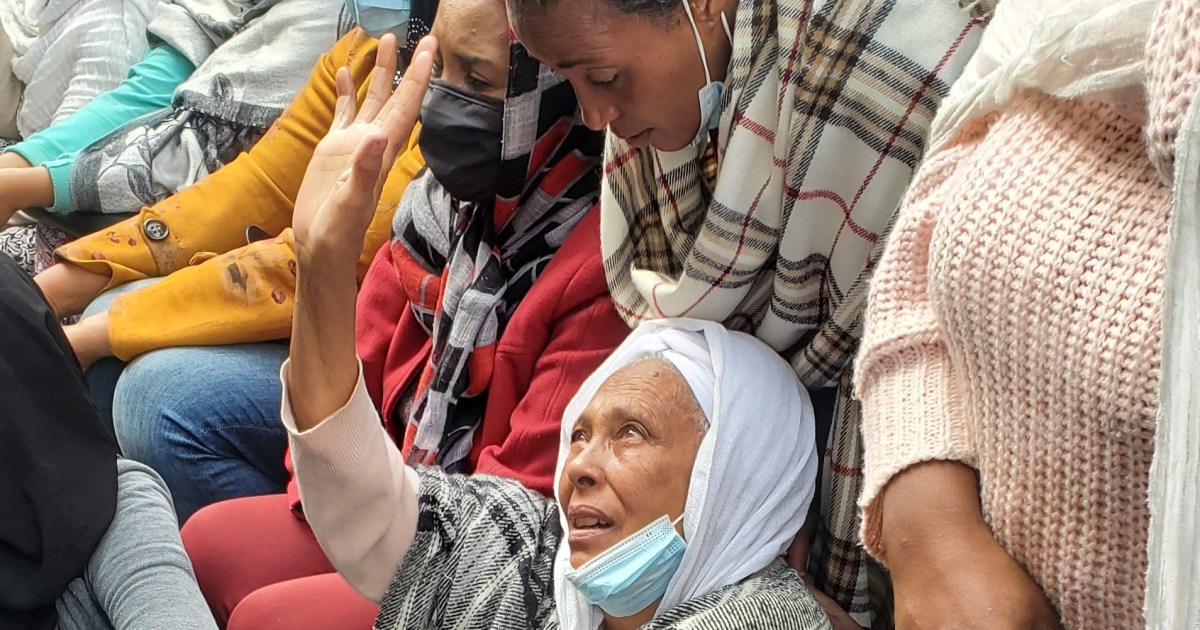 Ethiopian parents living in agony as students stranded in Tigray