The comments come a day after the bloc threatened to impose export controls on COVID shots produced within its borders.

The European Union has warned pharmaceutical giants that have developed coronavirus vaccines with EU aid that it must get its shots on schedule, a day after the bloc threatened to impose export controls on vaccines produced within its borders.

The vaccination roll-out in the world’s biggest trading bloc, which has 450 million citizens, is lagging behind countries like Israel and Britain, despite having more than 400,000 confirmed virus deaths since the pandemic began.

“And now, the companies must deliver. They must honour their obligations,” the head of the EU executive added.

The hardening of its position came days after it accused AstraZeneca of failing to guarantee the delivery of coronavirus vaccines without a valid explanation. It also had expressed displeasure over vaccine delivery delays from Pfizer-BioNTech.

The Pfizer vaccine is already being rolled out in the EU, and the AstraZeneca shot is expected to be approved this week.

AstraZeneca, which developed its vaccine with Oxford University, said last Friday it would cut supplies to the EU in the first quarter of this year, a move that a senior EU official said meant a 60 percent reduction to 31 million doses for the bloc.

The company said initial deliveries to the EU would fall short of the targeted volumes because of a production glitch.

US drugmaker Pfizer said there would be a temporary effect on shipments of its vaccine in late January to early February. 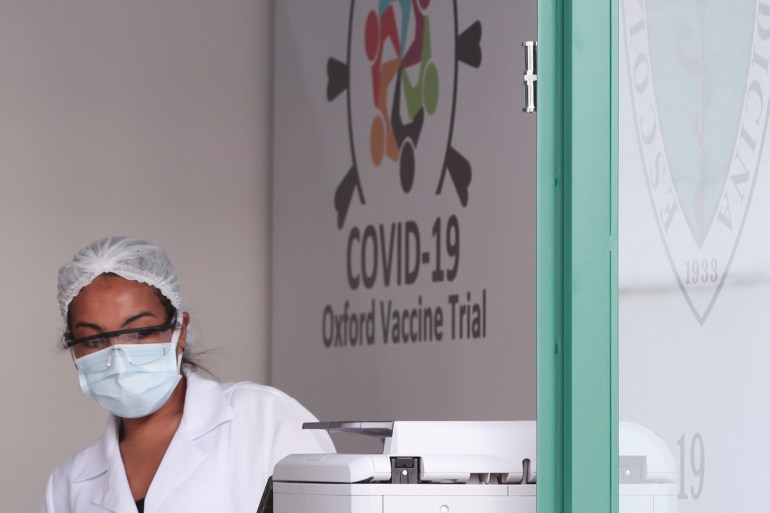 AstraZeneca said deliveries to the EU would fall short of the targeted volumes because of a production glitch [File: Amanda Perobelli/Reuters]EU member states could take AstraZeneca to court for breach of supply contracts if it did not honour its schedule, Latvian Foreign Affairs Minister Edgars Rinkevics said.

“The possibility should be evaluated, and it should be coordinated among the EU countries,” the minister told the news agency Reuters, via a spokesman.

The European Commission will finalise a proposal by the end of the week to require pharmaceutical firms to register their vaccine exports from the EU, and says it has no plans to impose an export ban.

‘Protectionism is not right’

Health minister Matt Hancock said Britain, which has left the EU, would be able to work with the bloc to ensure there is no disruption, and that rejecting vaccine nationalism and protectionism was important.

“I’m sure that we can work with the EU to ensure that, whilst transparency is welcome … no blockers are put in place,” he told an event hosted by the Chatham House think-tank, adding he had spoken to the chief executives of Pfizer and AstraZeneca.

“… But I would urge all international partners in fact to be collaborative and working closely together, and I think protectionism is not the right approach in the middle of a pandemic,” Hancock said.