The English Premier League is set to kick off behind closed doors and under strict restrictions exactly 100 days after its season was suspended due to the coronavirus pandemic.

Manchester City will host Arsenal after Aston Villa plays Sheffield United on Wednesday, but there will be no fans and stadiums are restricted to about 300 key people as the danger of the pandemic persists.

The Premier League's return follows the resumption of top-flight football in Germany as well as in Spain and Turkey. The Italian Serie A will get under way on Saturday.

The Premier League was suspended after Arsenal manager Mikel Arteta tested positive for the coronavirus on March 12. The government later halted all sport in the country to prevent the spread of the virus.

The United Kingdom, one of the hardest-hit countries in the world by COVID-19 with nearly 300,000 confirmed cases, including 42,054 deaths, imposed a nationwide lockdown in March.

But restrictions are starting to ease, with shops, non-essential businesses and some schools reopening in England.

"When the whole county went into lockdown, every industry sector was wondering when some semblance of normality could be returned to," Premier League chief executive Richard Masters said.

It will be a different experience for teams and fans.

Players will be asked to maintain physical distancing where possible - staying two metres (six feet) apart - in dressing rooms, entering the field, during warm-ups and in celebrations.

Artificial sound will be made available to viewers, but some live supporters will be streamed from home into stadiums on big screens.

Some teams like Brighton, where Arsenal visits on Saturday, will also put cardboard cut-outs of fans on seats.

"Obviously it is going to be an odd experience without fans. The Premier League won't be back with a capital B until fans are back," Masters said.

"I think throughout our discussions with Government, and across sports and those key working groups, real progress has always been made." 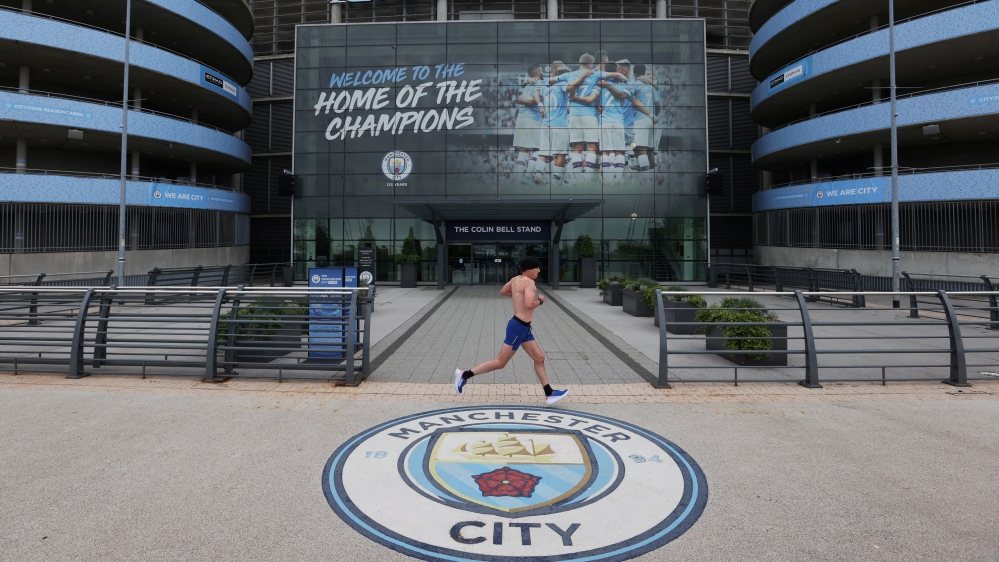 Manchester City vs Arsenal kicks off at 19:15 GMT on Wednesday [File: Carl Recine/Reuters]

Manchester City knows it will be surrendering the Premier League trophy to leaders Liverpool.

If City loses to Arsenal in Wednesday's kick-off, Liverpool can end a 30-year drought by beating Everton in the Merseyside derby on Sunday.

Teams are being encouraged to travel across England on the day of the game - ideally by plane - rather than staying in hotels.

Teams will have logos supporting the National Health Service on the front of their shirts and, for the first 12 matches, the words "Black Lives Matter" will replace their names above the number on their backs.