Port Harcourt, Nigeria – For two weeks, thousands of young people across Nigeria and abroad this month took to the streets to call for the dissolution of Special Anti-Robbery Squad (SARS), an infamous police unit accused of extortion, extrajudicial killings, rape and torture.

This was far from the first time Nigerians had made such a demand. It was, however, by far, the first time their calls garnered such widespread support and international media coverage – thanks, largely, to the prominent role of social media in spreading the word.

Peaceful protests against police brutality began on October 8 after a video allegedly showing a SARS operative killing a man was widely shared online.

The #EndSARS hashtag swiftly started trending, boosted in part by Nigerian celebrities and high-profile personalities with large followings. As the hashtag also spread beyond the country’s borders, a number of Nigerian Twitter users announced they would help cover the phone bills of others so they could afford to keep tweeting and maintain momentum.

Encouraged by the first protest held in Lagos, Nigeria’s commercial capital, Uloma Nwoke and her friends decided to also organise one in the Lekki area of the city. They shared a flyer detailing the time and location of the protest on various social media platforms – and on the morning of October 10, they were surprised to see that nearly 1,000 people had descended on the site.

“A lot of celebrities and influential people showed up,” Nwoke said.

Meanwhile, thousands of kilometres away, Omolara Oriye, a human rights lawyer, was organising a protest via WhatsApp in South Africa’s capital, Pretoria. She said a video of Nigerian police officers manhandling demonstrators circulating on Twitter prompted her to action.

“I contacted the Nigerian Student Association in Pretoria who put me in touch with Nigerian students,” said 32-year-old Oriye. “We met at the [Nigerian] embassy.”

On October 15, the protest movement got an extra push from Twitter’s CEO, Jack Dorsey, who used the #EndSARS hashtag as he posted a donation link associated with the Feminist Coalition, one of the most prominent groups supporting protesters on the ground.

While the amplification of the protest by celebrities and social media influencers bridged the information gap left by local news outlets, protesters resisted attempts by government officials to single out influential personalities as spokespeople via invitations to join newly instituted panels on police reforms.

Having witnessed other movements fizzle out following closed-door meetings between lionised protest leaders and government representatives, many activists cautioned against such appointments.

Nwoke, 25, decried the tendency of celebrities to monopolise the microphone at protest venues, depriving those most affected by SARS of the opportunity to share their experiences.

“It was one of the biggest challenges for me,” she said, of celebrity worship and narcissism. “Most of them just want to always be in front. We had to start profiling [speakers].”

“Celebrities are great for amplification, but they are not movement leaders,” she said, arguing that many are ill-informed and have, in the past, diverted attention away from knowledgeable activists.

We're still on job. There have been quite a few medical/hospital bill requests lately and still normal requests from outside Lagos. And the mental health lines are running for anyone who's struggling. We're working with @MentallyAwareNG & @StandtoEndRape

Apart from raising awareness about police brutality and coordinating protests on the ground, various #EndSARS organisers used social media to connect with volunteers, accept donations from other parts of the world and publish accounts of disbursed funds through frequent updates.

“This entire movement was born, bred and salvaged online,” said Chioma Agwuegbo, communications lead for Not Too Young to Run, an advocacy group dedicated to getting young Nigerians into public office. “There was a constant reminder that there was no leader, [which] helped strengthen people’s voices and close any avenue for compromise.”

On the news front, web-based publications largely run by and geared towards millennials kept the protest in the fore alongside witnesses armed with smartphones, as most traditional media outlets – perhaps wary of running afoul of the Nigerian Broadcasting Corporation’s directive to be cautious with user-generated content and to not “embarrass” the government – kept off.

Their reticence left protesters such as Nwoke disappointed.

“It hurt me personally that people were dropping dead on the street and news channels were showing a cooking show or talking about some irrelevant subject,” she said. 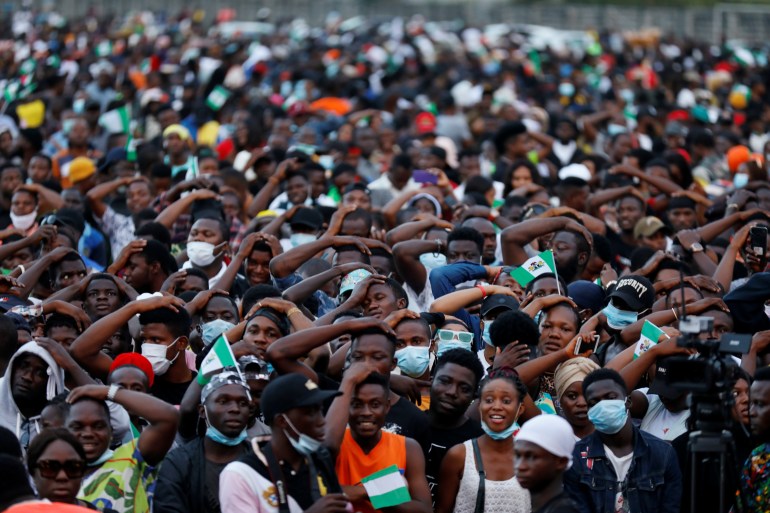 On Friday, President Muhammadu Buhari said 51 civilians were killed and 37 injured since demonstrations began, blaming the violence on “hooliganism.” He added that 11 policemen and seven soldiers had been killed by “rioters”.

Buhari’s statement came two days after Amnesty International put the death toll at 56, with about 38 killed on October 20, the same day security forces opened fire on unarmed demonstrators in Lekki, in an attack that was livestreamed on Instagram by a witness and caused widespread outrage.

Amnesty said its on-the-ground investigation by Amnesty International confirmed that the army and police killed at least 12 peaceful protesters in Lekki and Alausa, another area of Lagos where #EndSARS protests were being held. The army has denied the involvement of their men in the shooting.

Oriye expressed admiration for the dynamism of social media-savvy Nigerians.

“The Nigerian press refused to cover the issue initially, so it forced us to rely on social media to record information to preserve the truth and possible evidence,” she said.

Still, some Nigerians remain unconvinced by the video evidence. In a now-deleted tweet, an actress with more than one million followers seemingly cast doubt on the Lekki shooting, requesting the bereaved to “speak out”.

Others, however, are urging those with proof to store it in the cloud, away from potential government interference.

And despite the brutal clampdown, many see a silver lining.

“One of the things that would help us [gain political power] is community engagement,” said Nwoke. “That was something we tried to implement during the protest, educating people about the issues.”

For her part, Agwuegbo believes the events of the past two weeks have transformed Nigerian youth into a force to be reckoned with in the general elections less than three years from now.

“I think 2023 will be interesting for the future of the country because there’s rage,” she said. “But there’s also the realisation that if we come together and plan towards something, we can make it.”