Election day in Georgia – again – to decide control of Senate

Dalton, Georgia, USA – After a gruelling month of campaigning, millions of Americans from the southern state of Georgia head to the polls again on Tuesday to vote in a double runoff election, the outcome of which will determine control of the US Senate and shape the first years of Joe Biden’s presidency.

Georgians will vote to fill two Senate seats: One race is between Republican Senator Kelly Loeffler, a wealthy businesswoman who was appointed to the seat in 2019 to replace a retiring senator, and Democrat Raphael Warnock, a pastor in Atlanta. The other pits Republican Senator David Perdue, a businessman and cousin of former Georgia Governor Sonny Perdue, against Jon Ossoff, a documentary filmmaker who ran unsuccessfully for a US House seat in 2017. 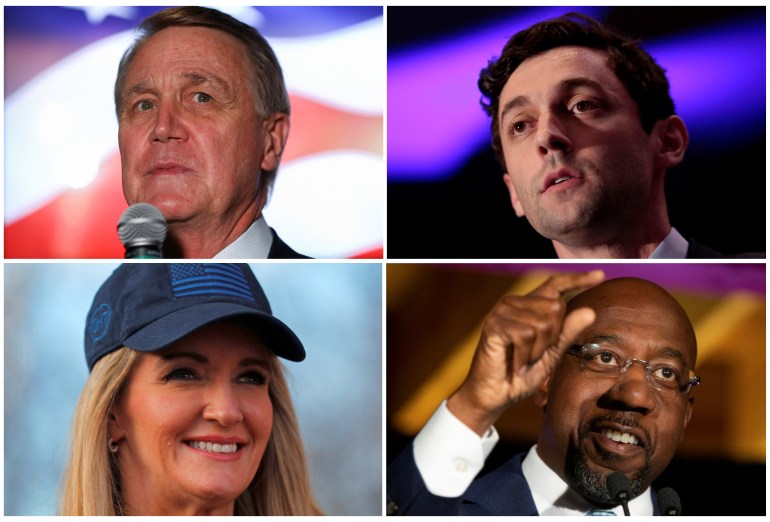 Republican US Senators David Perdue (top left) and Kelly Loeffler (bottom left) and their Georgia runoff election challengers, Democrats Jon Ossoff (top right) and Raphael Warnock (bottom right) [Reuters]Democrats need to win both races to even the number of Republicans in the Senate and take effective control of the upper chamber. Incoming Vice President-elect Kamala Harris, a Democrat, would cast a deciding vote for any vote ties in the chamber after she is sworn in on January 20.

The runoff elections will serve as an important test of party power in this rapidly changing state where Democrats have only recently gained an edge after decades of Republican control. In November, Biden became the first Democratic president to defeat a Republican in a generation, when he bested President Donald Trump by just 11,779 votes. Georgia was the only southern state to slip out of Republican hands in the presidential race, a sign that Democrats could have a promising future if they continued to mobilise voters.

Too close to call

These runoffs were triggered after the general election on November 3, when no candidates garnered more than 50 percent of the vote needed to win. Since then, no clear frontrunners have emerged. Polls have consistently shown the race to be too close to call.

“This election is about as close as you can get,” said J Miles Coleman and Niles Francis of the University of Virginia Center for Politics in a joint analysis. “It’s hard to tell who has the edge, but undoubtedly, the party that does a better job turning out the base will be the party that carries the day.”

The long American presidential election season that preceded the runoffs has not dampened political enthusiasm here. Since early voting started in December, turnout has been extraordinary. More than three million Georgians voted early or mailed in ballots before election day, a level of participation that has surpassed all previous runoff elections in state history.

Early turnout has been especially robust in regions that traditionally support Democrats, sending a possible early warning to Republicans, even though past election results suggest that Republican voters generally prefer to vote on Election Day. Hundreds of thousands of people, for instance, have already voted in the heavily Democratic Atlanta metropolitan area, particularly in highly populated Fulton and DeKalb counties.

“Republicans need a big election day turnout. That’s what happened in November, so it’s possible,” said Jessica Taylor, an election analyst for the Cook Political Report in Washington. “The early vote may look good for Democrats, but we can’t base it solely on that because we don’t know what the election day vote is going to look like.”

Political activists for both sides have flooded into the state to help campaign, including famous musicians, television personalities and Hollywood actors.

The runoffs have also, of course, attracted politicians, perhaps most notably the president himself.

Although Trump made two personal visits to Georgia to campaign for Perdue and Loeffler, his participation has come at a price for Republicans in the state.

At the same time that Trump has urged voters to support the Republican candidates, he has also waged a simultaneous war on party officials – including Georgia Republican Governor Brian Kemp – who oversaw the presidential election in the state. Trump, still sore from being the first Republican to lose the state in a generation, has made baseless allegations of widespread fraud and has accused Republican officials of overseeing a “rigged” voting process.

Trump’s allegations, while untrue, worried Republicans who fear that their supporters might choose not to vote if they think the election is unfair.

In a stunning move over the weekend before the runoff elections, Trump berated Georgia’s Republican Secretary of State Brad Raffensperger in an effort to pressure him to “find” votes in his favour nearly a month after he lost.

In a sign of party disarray, the day before the election, election officials here rebuked Trump for his allegation that the election was unfair.

“I want to scream,” said Gabriel Sterling, a Republican who oversaw the state’s voting systems.

“I personally found it to be something that was not normal, out of place,” Sterling said of Trump’s call to Raffensperger, “and nobody I know who would be president would do something like that to a secretary of state.”

Trump’s behaviour has put Republicans in a bind: They need him to encourage his supporters to vote for the candidates, but he is also casting a pall of doubt over the election process and undermining other Republican officials.

“Trump is always a double-edged sword,” said Taylor. “You need him for turnout, but he’s just so unpredictable and unhinged sometimes that it’s a risk as well.”

On the Democratic side, Biden and Harris have also made appearances in the state to rally Democratic voters. Their future administration has an enormous stake in the outcome: Victory here on Tuesday would allow them to enact their agenda through a supportive Democratic Senate, while defeat means constant negotiating with an antagonistic Republic upper chamber.

“Georgia, the whole nation is looking to you,” Biden told supporters in Atlanta on Monday. “Unlike any time in my career, one state can chart the course not just for the next four years but for the next generation.” 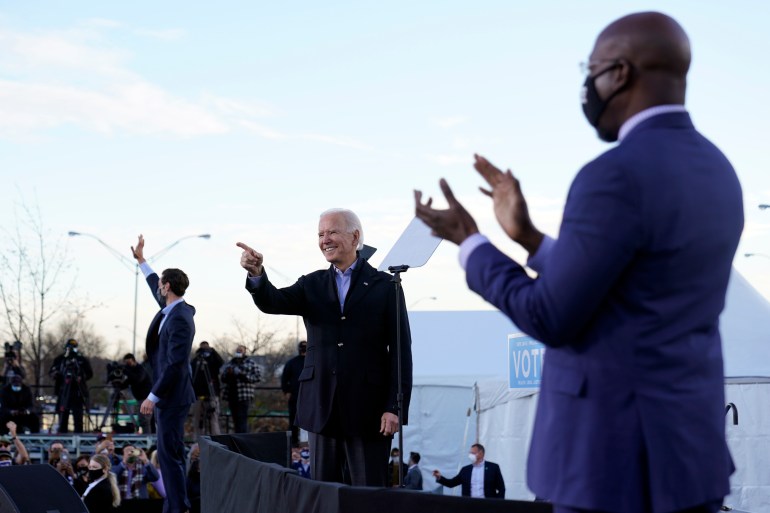 President-elect Joe Biden campaigns in Atlanta, January 4, for Senate candidates Raphael Warnock, right, and Jon Ossoff, left [Carolyn Kaster/AP Photo]Because of the high stakes of both contests, the Georgia runoffs have been the most expensive of their kind in history. Since Election Day in November, a staggering $440m has been spent on these races, money that has paid for get-out-the-vote efforts and political advertisements that air around the clock on Georgia television and radio stations.

Democrats have focused their efforts on mobilising voters in Georgia’s growing urban areas like Atlanta, Savannah and Macon, while Republican resources have gone towards rural districts in the north and south.

“This is the ball game,” said Taylor. “You’re going to put all the money down you have and run all the trick plays you can. This is what it all comes down to.”