Visiting Forces Agreement, which the Philippine president had planned to cancel, is a key part of the relationship between the two nations.

President Rodrigo Duterte has restored a pact governing the presence of US troops in the Philippines, the two countries’ defence secretaries announced on Friday, retracting a decision that had caused increasing concern among policymakers in Washington and Manila.

The Visiting Forces Agreement (VFA) provides rules for the rotation of thousands of US troops in and out of the Philippines for war drills and exercises. It has assumed additional importance as the United States and its allies contend with an increasingly assertive China, particularly in the disputed South China Sea.

“Let me thank President Duterte for his decision to fully restore the visiting forces agreement,” US Defense Secretary Lloyd Austin said on Friday in a joint press briefing with his Philippine counterpart, Delfin Lorenza.

Duterte’s decision provides the US “some degree of certainty going forward,” he said, noting the US role in “counterinsurgency efforts” in the southern island of Mindanao.

“We can plan further in advance and with that long range planning, we can actually do more comprehensive exercises.”

Duterte said last year that he planned to cancel the VFA but extended it until December.

Lorenzana said he was unsure why Duterte had changed his mind but made the decision after meeting Austin in Manila on Thursday night.

“Our countries face a range of challenges, from the climate crisis to the pandemic,” he said, adding that the Philippine-US alliance “will remain vital to the security, stability and prosperity of the Indo-Pacific,” he said.

“A fully restored VFA will help us achieve that goal together.

In a statement on Friday, Duterte’s spokesman Harry Roque said the president’s decision was “based on upholding the Philippines strategic core interests.”

“The Philippines will, however, continue to engage other countries for partnerships that work, based on our core national interests.”

A separate statement from Duterte’s office said that the Philippine president and Austin “had an open and frank discussion of the status and future direction” of the Philippine-US ties.

“They agreed that the alliance can be further strengthened through enhanced communication and greater cooperation,” the statement added.

Since becoming president in 2016, Duterte has repeatedly expressed his disdain towards the United States while signalling closer ties with China.

The Philippines is a US treaty ally, and several military agreements are dependent on the VFA.

Duterte promised to terminate the pact after the United States denied a visa to a Philippine senator who is an ally of the president. But he had repeatedly pushed back the expiration date, most recently in June. 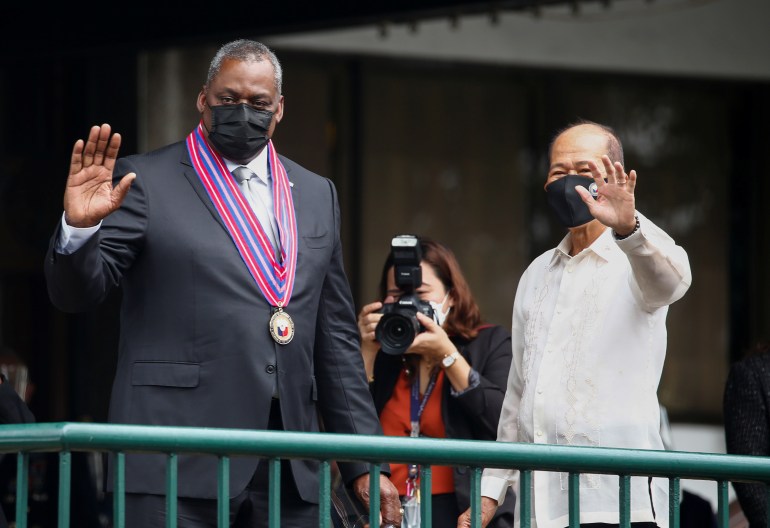 For the United States, having the ability to rotate in troops is important not only for the defence of the Philippines, but also to counter China’s assertive behaviour in the region.

There are longstanding tensions between the Philippines and China over disputed waters in the South China Sea, as well as the repeated swarming of Chinese militia vessels within the Philippine exclusive economic zone.

The United States this month repeated a warning to China that an attack on Philippine forces in the South China Sea would trigger a 1951 US-Philippines mutual defence treaty.

The United States has also sent the Philippines at least three million doses of COVID-19 vaccines to help combat the pandemic.

Duterte’s office said “the president expressed his appreciation” to the US assistance in the country’s fight against the pandemic.

Aside from Duterte and Lorenzana, Austin is also expected to meet the Philippines’s Secretary of Foreign Affairs Teodoro Locsin Jr.

Manila was the third and last stop of Austin’s trip through Asia as the US seeks to bolster security ties with Southeast Asian nations many of which also claim parts of the South China Sea. He also visited Singapore and Vietnam.

With additional reporting by Ted Regencia