Lake Oroville, California's second-largest reservoir, looks like a shell of its typical self as the drought across the western United States continues to toast the region.

The reservoir has hit its record low level, dropping to just 643.5 feet above sea level, reported the East Bay Times.

Drone footage captured by Live Storms Media's Brandon Clement this week shows the exposed shoreline surrounding the lake and dam, revealing how far the critical reservoir has dipped from its usual height. The dry and dusty hues of the dirt surrounding what remains of the reservoir make the lake look more like a river canyon. 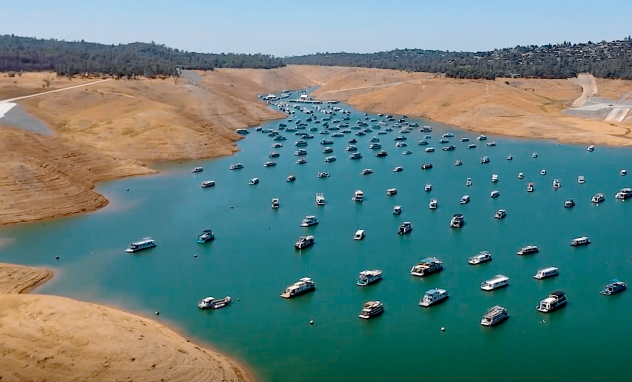 Lake Oroville at record low levels on Tuesday as long-term drought conditions continued across much of the West. Photo by Brandon Clement/LSM

When the reservoir reaches its full capacity, the lake's surface stands at 900 feet above sea level. In recent years, the closest the lake has been to full capacity was slightly over two years ago, when the lake reached 98 capacity, or 896 feet, reported KQED.

Boats in the lake are packed in, anchored in the only spots in the lake that are deep enough. Instead of a serene lake scene, the lake looks more like Los Angeles' Interstate 405, with boats instead of cars in a massive traffic jam.

Currently, the reservoir stands at 643.5 feet, about 25 of its capacity. The previous record low for the lake was 645.11 feet, recorded on Sept. 7, 1977. At its current pace, Lake Oroville is losing roughly a foot a day, as water is released from Oroville Dam to meet water quality and wildlife requirements downstream.

The moon appears orange due to smoke from wildfires on the West Coast as it sets behind the Manhattan skyline in New York City on July 21, 2021. The fires are leaving smoke all the way across the country to the Eastern Seaboard causing hazy skies. Photo by John Angelillo/UPI | License Photo

Justice Department accuses 138 medical professionals of $1.4B in fraud