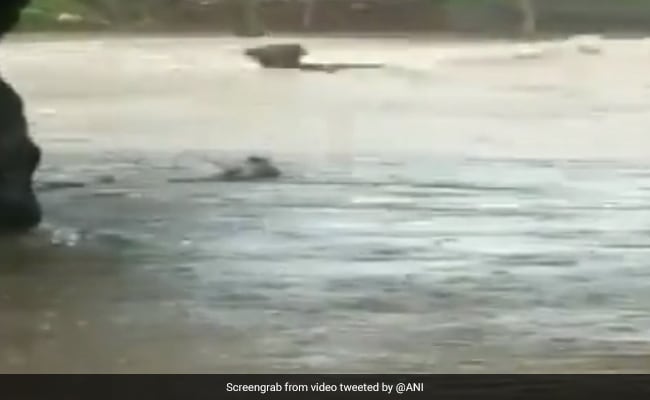 Cattle were washed away in a village of Gujarat's Rajkot district after heavy and incessant rainfall.

Cattle were washed away in a Gujarat village after heavy and incessant rainfall in the state's Saurashtra region left many areas flooded.

A video shared by news agency ANI, shows animals that appear to be buffaloes getting washed away in a river of high-speed waters that filled the streets of a village in Rajkot district. At least at eight cattle can be seen getting swept away in the 15-second video.

#WATCH Gujarat: Cattle washed away in flood at Khijadiya Mota village in Paddhari, Rajkot due to incessant rainfall. pic.twitter.com/QHAXW7tLIX

Saurashtra, of which Rajkot is a part, has been battered by heavy rainfall since Sunday because of a low pressure area over Kutch and neighbouring regions. However, some relief is expected tomorrow, the weather department, IMD, said.

Due to heavy rainfall in Gujarat, a nearly 30-year-old bridge over a river in Junagadh district caved in, a local official said, adding that no one was injured. A team of the National Disaster Relief Force (NDRF) was also deployed at the state's Khambhalia town to meet rain-related exigencies in the area, officials said.

According to the India Meteorological Department, while the monsoon remains "vigorous" in parts of Gujarat, moderate rains are expected in parts of Maharashtra, even as the flood situation improved in Assam, where one person lost his life in the deluge.

With this, in Assam, the total number of people losing their lives in this year's flooding and landslide has gone up to 62, of whom 38 people were killed by flood and 24 died due to landslides.

The national and state disaster response forces and district administrations have rescued 128 people during the last 24 hours.

Just 447 adverse events across India, most are minor issues