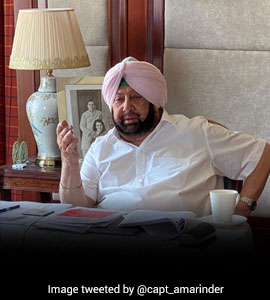 The increasingly bitter feud between Punjab Chief Minister Amarinder Singh and Congress MP Partap Singh Bajwa made headlines, yet again, on Tuesday, with Mr Singh tearing into his party colleague over a "shameful" letter to Dinkar Gupta, the state's Director General of Police.

In that letter Partap Singh Bajwa, a Rajya Sabha MP who has fiercely criticised the state government's decision to withdraw his police security cover because of a reduced threat assessment, accused Mr Gupta of "complete abdication of professional integrity and impartiality" in the discharge of his duties.

"I took the decision on your security cover. So, instead of attacking my DGP, write to me if you have any grudge. Or go to Congress high command.... unless you have no confidence in them either," Amarinder Singh shot back.

Picking apart Mr Bajwa's letter, he said it reflected frustration on the Rajya Sabha MP's part. "Have we not tolerated his criticism all this time?" he asked, adding that even the opposition could not accuse him of being "spiteful".

The Chief Minister also criticised attempts to lower the morale a police force that had protected Punjab from multiple threats, including terrorism.

"Does Bajwa really believe, and wants people to believe, that a police force which lacks propriety, independence and professional ethics, as alleged by him, would have achieved all this?" Mr Singh said.

On Monday Amarinder Singh defended the decision to pull police cover for Mr Bajwa, calling it a "routine exercise" that followed a periodic threat assessment review.

Today Mr Bajwa hit out at that claim, calling it a "bogus threat assessment" prepared "overnight" by Punjab police at the behest of the government. He said his threat perception had been confirmed by "several intelligence reports over the past few years".

"I am compelled to highlight your complete abdication of professional integrity and impartiality in the discharge of your duties as DGP of Police, Punjab," the parliamentarian's letter read.

Mr Bajwa, who claimed he was not writing to seek restoration of police cover, said he was "concerned with the politicisation of threat assessment reports".

Partap Singh Bajwa, who was replaced by Amarinder Singh as chief of Punjab Congress, has claimed that a "politico-police-drug nexus" in the state is feeding and protecting the production and distribution of illegal liquor.

He and another Rajya Sabha MP - Shamsher Singh Dullo (who was also Punjab Congress chief before Amarinder Singh) - have written to Governor VP Singh Badnore to accuse their own government and demand a CBI probe.

The Chief Minister hit back today, pointing out that if his government wanted to take "vindictive action" against Mr Bajwa it would not have waited till he had been assigned Z-category security from the centre.

Earlier this year Mr Bajwa was given 25-member security team (in addition to an escort vehicle and two drivers) because of his position as a Rajya Sabha MP. The central security cover was one more reason that his state cover had been withdrawn, with the Chief Minister explaining that the additional resources were needed elsewhere during the coronavirus pandemic.

Amarinder Singh made it clear that the decision to withdraw police cover was based on intel from the police, and that Mr Bajwa's attack on the DGP was against the culture and ethos of the Congress, of which he is a senior member.