"DNA Of Tolerance Gone In India, US": Rahul Gandhi To Ex-Envoy 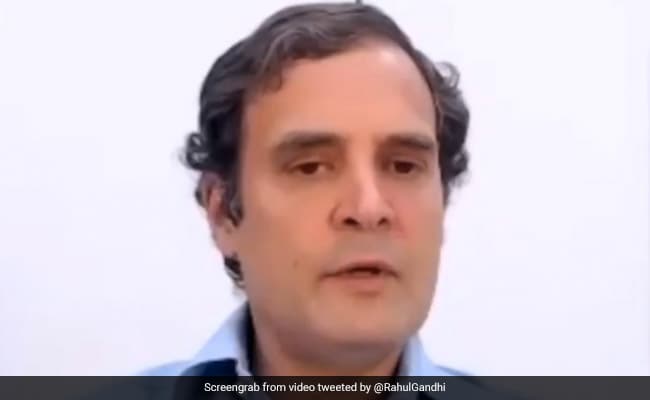 The "open DNA" and tolerance that India and the US were known for has disappeared, Congress leader Rahul Gandhi said in a conversation with former US diplomat Nicholas Burns on how coronavirus crisis was reshaping the world order.

The Congress leader also noted that the India-US relationship, which "used to be very broad", is now focused mainly on defence.

"I think why our (India & US) partnership works is because we are tolerant systems. You mentioned you are an immigrant nation. We are a very tolerant nation. Our DNA is supposed to be tolerant," Rahul Gandhi said in the video chat shared by the Congress on Friday morning.

"But the surprising thing is, that open DNA has sort of disappeared. I don't see that level of tolerance that I used to see in US and India," he said to the former American diplomat.

He also raised questions about what he believed was the change in the nature of India-US ties. "A relationship that used to be very broad- education, defence, healthcare and multiple fronts has sort of focused mainly on defence," Mr Gandhi remarked, asking Mr Burns where the relationship between India and the US was going.

The Congress described Mr Gandhi's latest interaction as one focused on the reshaping of the world order after the coronavirus crisis, the future of Indo-US relations and the key role played by the Indian diaspora in the US in building it.

The clash of ideologies - 'authoritarian'' China versus 'democratic'' United States and India - was also be discussed.

Nicholas Burns is currently the Professor of Practice of Diplomacy and International Politics at Harvard's John F Kennedy School of Government.

Mr Burns was United States Under Secretary of State for Political Affairs and chief negotiator of the India-US nuclear deal signed when the Congress was in power.

In his series of conversations with experts since the virus crisis began, Mr Gandhi has also spoken to Raghuram Rajan, Abhijit Banerjee, epidemiologist Johann Giesceke and industrialist Rajiv Bajaj.