For many across the world, the annual ritual of a poolside vacation this summer is looking increasingly unlikely. While tourist destinations are beginning to tentatively open, whether or not it’s responsible to travel to countries still recovering from the COVID-19 crisis is something that is continuing to be hotly debated.

But for those of us cooped up in our apartments on the third or fourth month of lockdown, there’s still a little slice of summer-ready escapism to be found—courtesy of British writer and curator Lou Stoppard’s latest book, Pools.

“It probably sounds quite simplistic when you say you've done a book on the pool in photography, but it’s surprisingly revealing,” says Stoppard. “The pool attracts photographers creating narratives within their work, using it as a backdrop or a set for various subplots. For other photographers, it's purely visual—about lines, symmetry and angles, and the interesting things they can do in terms of reflecting or warping certain forms.”

For Stoppard, however, the starting point for the project was more personal. As an avid swimmer herself—a subject she’s written about for The New Yorker and the Financial Times, among others—she began collecting her favorite images of pools many years ago. Having published her first book, Fashion Together, with Rizzoli in 2017, and wanting to pay homage to Kelly Klein’s ode to the swimming pool that was released by the same publisher in 1992, the format for the book came together quickly. 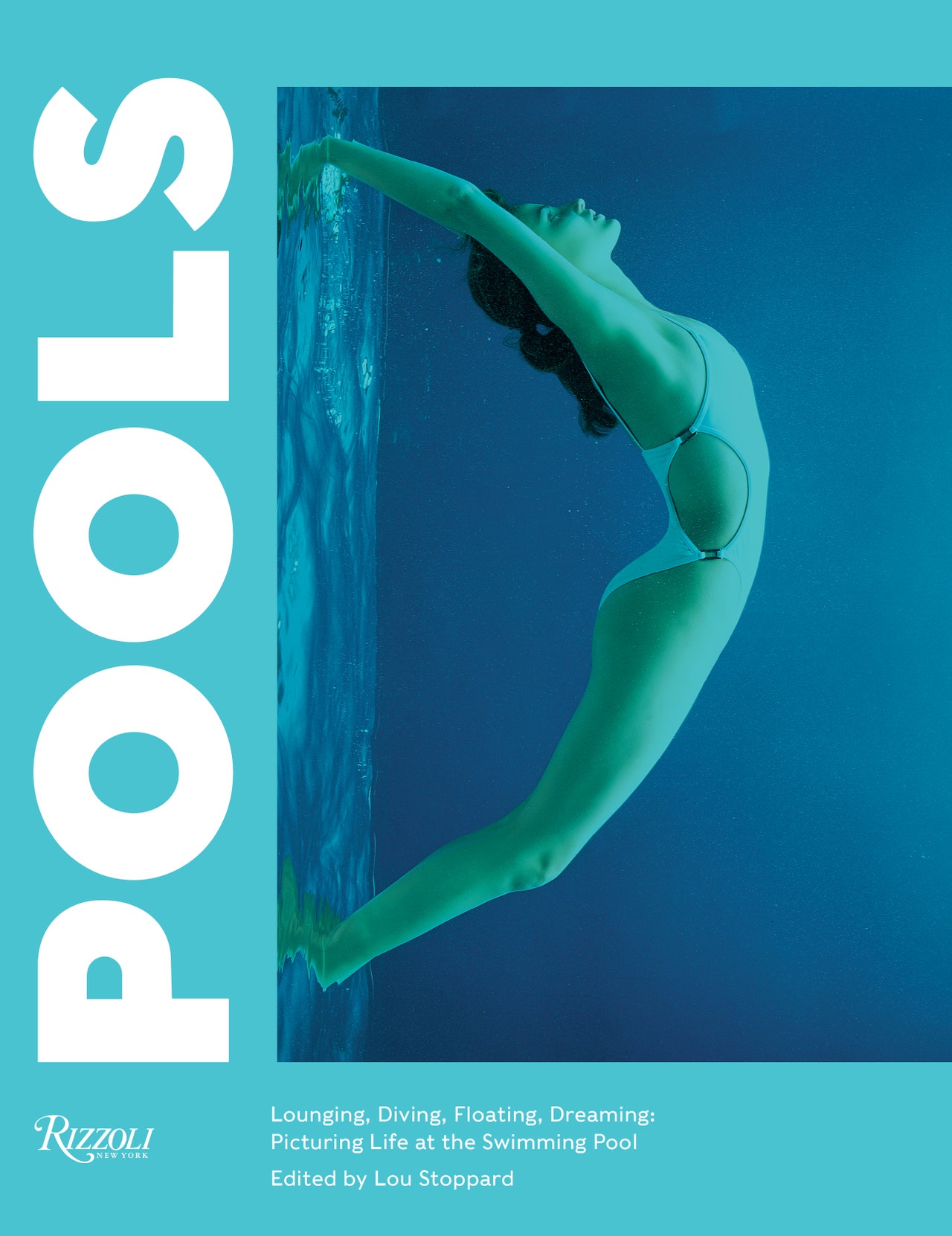 “I was interested that the pool had crossed generations of photographers working in very different styles and with different agendas or ideals,” she says. “It doesn’t seem to have dated.” Spread across 11 chapters covering subjects including architecture, meditation, and sex, the lavishly illustrated tome looks at the simple joy of the swimming pool from every possible angle. “One of my favorite chapters in the book is the coming of age chapter,” Stoppard adds. “It looks at the pool in the eyes of a young person and the sense of how freeing it feels to be in the water, that heady mania that comes out when you're near a pool.”

It’s more than just an epicurean tribute to the sun-soaked glamour of bodies lounging around pools, though. With a poetic foreword by writer and artist Leanne Shapton, alongside essays by the likes of former British Vogue picture editor Robin Muir and historian Susie Parr, it also provides a forensic overview of how pools have evolved in the cultural consciousness. It becomes clear that the swimming pool isn’t just a site of youthful exploration or summertime relaxation, but that its relationship with how women have been represented in photography across the 20th century is surprisingly nuanced.

“If you look within the history of the pool within fashion, it's easy to presume that it's been used as something to project quite a clichéd image of women,” Stoppard explains. “Actually, the pool has at points served to get photographers out of the studio and capturing women who travel, women who have leisure pursuits. Someone like Louise Dahl-Wolfe, she was so pioneering in terms of the way she represented women and she presented the idea of the Vogue or fashion woman as someone who traveled and was independent. It was modern.”

Here, Stoppard selects five of her favorite images from the book to transport you to sunnier climes—wherever you might be.

“This was British Vogue’s first photographic cover, and it’s interesting that it’s not a dress or tailoring—it’s athletic, and there’s a sense of an active woman. For every image you can find by a male photographer that focuses on these nude live bodies that feel oversexualized, there are also amazing images by female, or male, photographers who challenged the way women were represented within fashion images. There are more images that appear to be shot in a pool but were actually shot in a tank or in a studio than you might think, which I find amusing.” — Lou Stoppard

“It definitely felt important to do something around the pool in California, as it’s so much part of the collective imagination. This image came from a series called “Hollywood Sons” with these amazing landscapes, and incredible mansions, and opulent, beautiful pools. There’s a sense of the easy life, the good life. Alice has made images in very different types of pools, some well maintained, and others more gritty, but she always manages to see the glamour within any scenario. It captures that happy boredom when you’re just lounging.” — Lou Stoppard

“This image is from Frank magazine in the mid-’90s. It’s one of Sølve’s earliest shoots, and it perfectly captures how skilled he is as an image-maker. I liked not having an actual pool on the cover, as the book is also about the sensation of being in water, the way your body moves, that feeling of breathing underwater, the light and the bubbles and the blue. It felt like a nice way of summing that up. The image looks so modern, even though it’s 20 years old, and I think it really captures the timeless quality of the pool.” — Lou Stoppard

“Daragh is a young Irish photographer, and this image was shot in the South of France. I think it reflects the beauty of French public pools which can often feel like a time warp. Nothing would ever look that good if someone designed it now, and it captures the sense of being young and taking it for granted. Also, French swimming rules are so strict, whereas if you swim in a public pool in the UK you can do what you want. The French regulations seem funny, but they probably sum up various sweeping cultural stereotypes. You have to wear a swimming hat even if you're bald, for example, and men have to wear tight trunks. Daragh talked about how the pool is hedonistic in a mild-mannered way, which I think is the perfect way of putting it.” — Lou Stoppard

“This is a classic example of how the pool attracts younger image-makers. When you think of the pool, you think of iconic pictures by Guy Bourdin or Helmut Newton, but it’s interesting to see how the same ideas can reflect the spirit and mood of today, and how photographers still find the pool useful for expressing that. When I was researching the book, I found it hard to find a photographer who hadn't made a pool picture at some point, so it’s nice to see young image-makers finding inspiration there, and I definitely wanted that mix.” — Lou Stoppard

“I knew I wanted to have a chapter on architecture, and Romain has worked with a few architects at different points. He captures that sense of symmetry and visual peace. Roman is really interested in private pools, which have a very different energy to the public pool. There’s such a cult of the swimming pool on Instagram and Roman’s work captures all of the sensations that people try to contain within their pool images on Instagram: the sense of beauty, peace and leisure, as well as the opulence that comes with a private pool, which is definitely a unique sensation.” — Lou Stoppard

8 times Anushka Sharma made a case for comfortable summer loungewear

“I want to emphasise the beauty of the country”: Maria Grazia Chiuri on hosting Dior’s Cruise 2022 collection in Athens