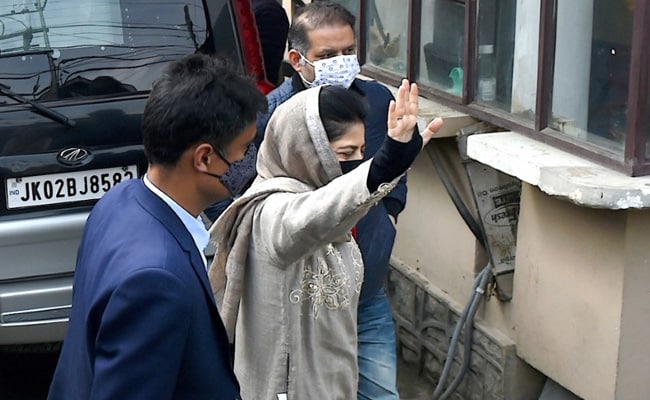 Jammu and Kashmir Peoples Democratic Party (PDP) chief Mehbooba Mufti, who was questioned by the Enforcement Directorate (ED) for more than five hours today, said while dissent has been criminalised, the central agencies like the NIA, CBI and the ED were being "misused" to silence the opposition.

She alleged that anyone opposing the current government was "hounded by trumped up charges" like sedition or money laundering.

"Dissent has been criminalised in this country. The ED, Central Bureau of Investigation and the National Investigation Agency are being misused to silence the opposition tactically," Ms Mufti said outside the ED office at Rajbagh in Srinagar.

"This country is not being run by the Constitution but the agenda of a particular political party," she alleged.

The PDP chief said she was asked by the ED about the sale of her ancestral land in Bijbehara area of Anantnag district. "Questions were asked regarding the sale of our ancestral land in Bijbehara and use of the chief minister's discretionary fund. I was asked from where would come the list of widows who were receiving help from the CM's secret funds," Ms Mufti said, adding that she had nothing to fear as her hands were clean.

The former chief minister said her party will continue to pursue the agenda for resolution of Jammu and Kashmir's problem and restoration of its special status as it existed before August 5, 2019.

Ms Mufti did not appear before the agency in Delhi on Monday, citing that she had prior commitments which could not be cancelled.

The PDP chief had requested ED officials to question her in Srinagar and not in Delhi, and her request was accepted.

The 61-year-old leader, who was released last year after more than a year in detention following the scrapping of Jammu and Kashmir's special status, was served a notice to appear at the ED headquarters in the national capital.

On March 19, the Delhi High Court had refused to stay summons issued to her after she moved the court seeking quashing of the summons in the case.

The ED, which had earlier summoned Ms Mufti on March 15, had not insisted on her personal appearance at that time.

"I write to you in reference to the summons issued to me to be present at your Delhi office on March 22. I have challenged in the Delhi High Court the constitutional vires of Section 50 of the PMLA (Prevention of Money Laundering Act), under which these summons are issued," she had said in a letter to the ED.

Section 50 of the PMLA empowers the authority, that is, officers of the ED, to summon any person to give evidence or produce records. People summoned are bound to answer the questions put to them and to produce documents as required by the ED officers, failing which they can be penalised under the PMLA.

The PDP leader had said that without prejudice to any of the contentions in the proceedings before the high court "I state that I am not in a position to attend the summon on March 22 as I have prior commitments that cannot be cancelled at such a short notice. If, however, you insist we must do it sooner, I am ready and willing to be questioned in Srinagar, preferably at my residence or through video conference from Srinagar."