Designer glasses worn by the cast of new Disney film Cruella were among hundreds of pairs stolen from a high-end eyewear store in London.

CCTV footage from luxury glasses designer Tom Davies' shop in Slone Square shows thieves stealing the specs, worth up to £500,000. 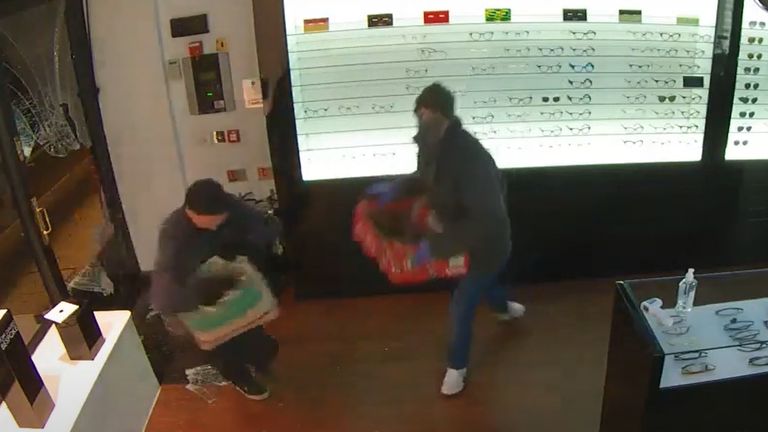 Image: The optician released CCTV footage of thieves breaking into his store in central London

A spokesperson from the store confirmed that both Ms Stone and Dame Emma wore two pairs of glasses which were taken.

The theft took place on 9 June and included sunglasses and optical frames.

A "wanted" poster issued by the store following the burglary said: "If you are offered any sunglasses with "TOM DAVIES FOR CRUELLA" engraved on the inside arm, please can you let us know @tdtomdavies.

"Our store was broken into on 9 June at 2am and hundreds of frames were taken.

"The thieves probably didn't know they had also stolen glasses recently made for the film Cruella which were due to be auctioned off for charity.

"These distinctive frames have a far bigger value at a charity auction than to the criminals who vandalised our store and will struggle to sell them.

"If you are offered any of these frames or have any information you can share, please let us or the local police know.

"If you have the glasses in your possession, we will swap them for a pair of Tom Davies sunglasses.

"Unless you're one of the thieves, in which case we will happily hand you over to the authorities." Image: The stolen merchandise includes glasses worth up to £500,000 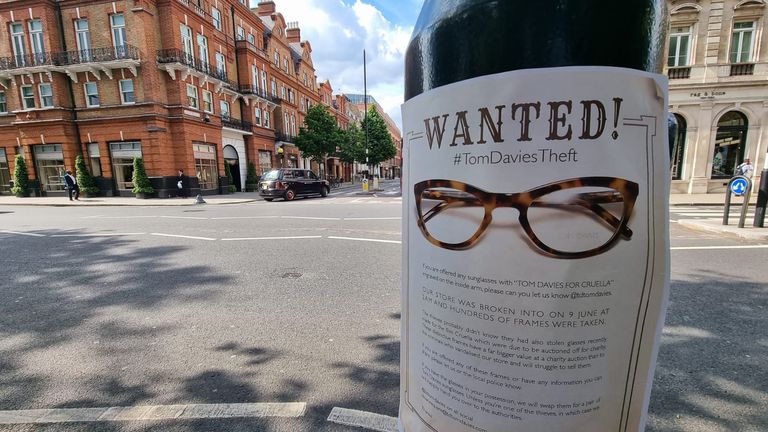 Image: Designer Tom Davies released a 'wanted' poster after his Sloane Square store was broken into

A Metropolitan Police spokesperson said: "Police were called at 02:13hrs on Wednesday, 9 June to reports of a burglary at a commercial property in Sloane Square, SW1.

"Officers attended and it was reported that a quantity of sunglasses had been stolen by a group of men who had left before police arrived.

"Enquiries are ongoing; there have been no arrests."