The Delta coronavirus variant doubles the risk of hospitalisation compared with the previously dominant variant in the United Kingdom, but two doses of vaccine still provide strong protection, a Scottish study has found.

British Prime Minister Boris Johnson is expected to delay the ending of COVID-19 restrictions in England on Monday, following a rapid rise in cases of the Delta variant, which is also more transmissible than the Alpha variant.

The study, published in a research letter in The Lancet on Monday, looked at 19,543 community cases and 377 hospitalisations among 5.4 million people in Scotland, of which 7,723 cases and 1,234 hospitalisations were found to have the Delta variant.

Chris Robertson, professor of public health epidemiology at the University of Strathclyde, said adjusting for age and comorbidities, the Delta variant roughly doubled the risk of hospital admission, but vaccines still reduced that risk.

“If you test positive, then two doses of the vaccine or one dose for 28 days roughly reduces your risk of being admitted to hospital by 70 percent,” he told reporters. 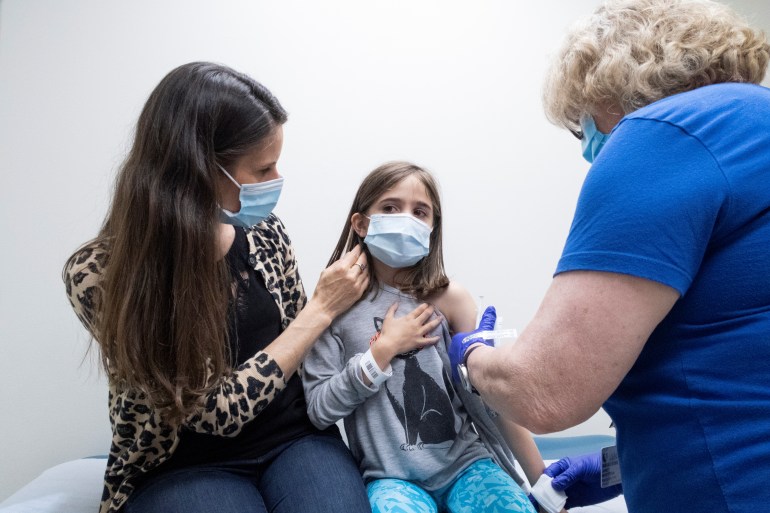 The UK’s foreign secretary has indicated the government wanted to use the additional time to get millions more younger people double-jabbed before fully reopening [File: Shawn Rocco/Duke Health/Handout/Reuters]Two weeks after the second dose, Pfizer-BioNTech’s vaccine was found to have 79 percent protection against infection from the Delta variant, compared with 92 percent against the Alpha variant.

For Oxford-AstraZeneca’s vaccine, there was 60 percent protection against Delta compared with 73 percent for Alpha.

“The Oxford–AstraZeneca vaccine appeared less effective than the Pfizer–BioNTech vaccine in preventing SARS-CoV-2 infection in those with the Delta variant of concern,” the authors wrote in The Lancet article.

However, they added: “Given the observational nature of these data, estimates of vaccine effectiveness need to be interpreted with caution.”

The scientists said two doses of vaccine provide much better protection than one dose against the Delta variant, and a delay to easing lockdown in England would help more people get second doses and for their immune responses to build up.

“I think any sort of increase in the window of opportunity before lockdown measures are completely brought to an end will be helpful,” said Aziz Sheikh, director of the Usher Institute at the University of Edinburgh.

Foreign Secretary Dominic Raab indicated at the weekend the government wanted to use the additional time to get millions more younger people double-jabbed.

He said while the vaccines had weakened the link between infections and hospital admissions, they wanted to be sure it was “severed and broken”.

The cautious approach was, he said, necessary to ensure the unlocking was “irreversible” and that they did not have to “yo-yo back in and out of measures”.

The latest daily government figures on Monday showed another rise in infections with a further 7,742 lab-confirmed cases in the UK.