Decades after the Gulf War, Iraq’s youth view oil as a curse

Baghdad, Iraq — Like most of the young people who joined Iraq’s countrywide demonstrations in 2019, musician Sally Mars took to the streets to demand that the government tackle unemployment, improve basic services and end corruption.

The call to specifically end corruption in Iraq’s oil industry quickly became one of the biggest battle cries among demonstrators.

Mars, who goes by her stage name as a musician, doesn’t care much for oil, yet her life has been largely influenced by the role of the industry in Iraqi politics, even before she was born. The country, she says, has been cursed by oil.

“It fell into the wrong hands, bad leadership and corruption – imagine so much money and power being given to the wrong people, what can we do?” Mars, 24, told Al Jazeera while sitting in a Baghdad cafe 30 years after Iraq went to war over oil.

In late February 1991, Iraqi President Saddam Hussein ordered the withdrawal of his troops from Kuwait, ending Iraq’s months-long occupation of the neighbouring Gulf state. Mars’s father was among the retreating soldiers.

“My mother told me that when he came back [from the war], he was a different man. I can see it in his eyes how much it affected him,” Mars said. 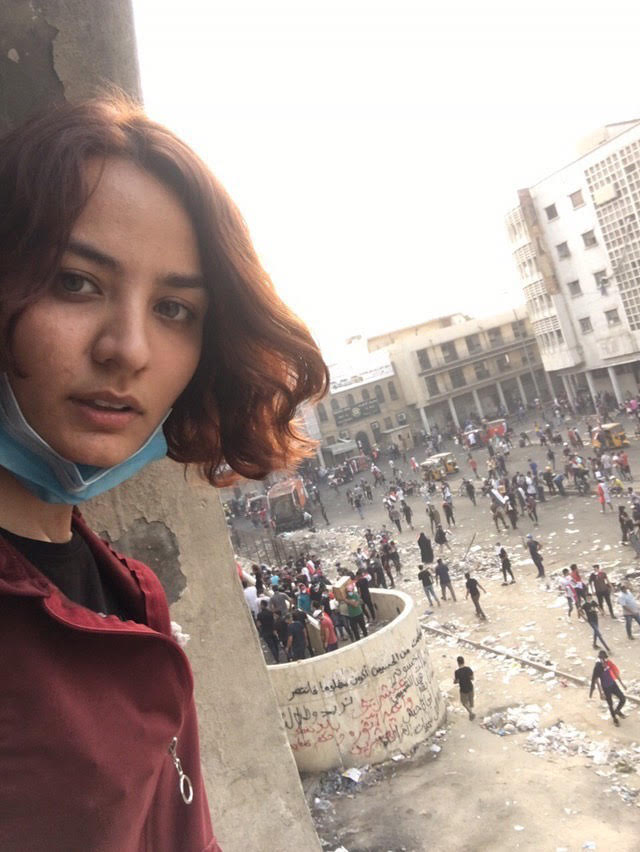 Six months earlier, in August 1990, Iraq had accused Kuwait of stealing $2.4bn worth of oil from Rumaila, a super-giant oilfield not far from their shared border — bringing an old territorial and oil dispute between the nations to a head.

Kuwait’s alleged encroachment on Iraqi soil became the perfect excuse for Hussein to order the occupation of the small Gulf state. In a matter of weeks, the Iraqi military had invaded and annexed Kuwait, changing its name to Province 19.

The seamless military victory not only provided the Iraqi troops with a morale boost, but it also granted Iraq a substantial coastline along the Persian Gulf and settled an Ottoman-era dispute regarding Kuwait’s sovereignty.

More importantly, the annexation of Kuwait saw Iraq increase its oil supply to almost 20 percent of the world’s reserves, securing a greater ability to influence global prices and production.

If left unchallenged, Iraq “would have controlled a huge chunk of the Organization of the Petroleum Exporting Countries (OPEC),” Ahmed Tabaqchali, a senior fellow at the Iraq-based Institute of Regional and International Studies, told Al Jazeera. “And that is something the US would not have accepted.”

Oil: the US’s most tangible interest

OPEC, of which both Iraq and Kuwait are founding members, saw prices and output begin to recover in the late 1980s after crashing in the early part of the decade, making the organisation a powerful force in global oil production.

The prospect of Iraq controlling Kuwaiti oil, while also eyeing up Saudi Arabia’s massive reserves, was not something the United States was willing to put up with.

Alarmed by Hussein’s expansion, the US rallied a coalition of forces and set out to defend Kuwait and Saudi Arabia from their northern neighbour. Within weeks, the US had deployed half a million soldiers in a bid to protect the global oil market. The intervention, said Tabaqchali, was mostly “commercially driven”.

The final push to dislodge Iraq from Kuwait came in January 1991 in the form of an air and ground offensive called Operation Desert Storm. In just six weeks, Iraqi troops were forced out of Kuwait.

US President George HW Bush declared a ceasefire, and to the US’s relief, the Gulf state oilfields were back under the watchful eye of US ally and Kuwait ruler Sheikh Jaber al-Ahmad al-Sabah.

The US had succeeded in maintaining its place in the global oil pecking order while also setting the stage for its final mission against Saddam Hussein 12 years later.

In a bid to punish Hussein, the Gulf War was followed by years of international sanctions, embargoes and underinvestment, harming civilians and battering Iraq’s oil industry.

During the first five years of sanctions, the United Nations Security Council stopped Iraq from exporting oil and gas. It wasn’t until after the US-led invasion in 2003 that Iraq opened its doors to foreign expertise, increasing its oil exports and revenues and creating more jobs in the public sector.

Oil, which accounts for 90 percent of central government revenue and nearly 100 percent of the country’s exports, according to the World Bank (PDF), should have paved the way for a more prosperous Iraq. Instead, its proceeds have been lost in the black hole of Iraqi corruption.

In 2020, Iraq ranked 160 out of 180 countries in the corruption perception index of Berlin-based organisation Transparency International.

You can see Iraq’s wealth coming out of the ground and yet none of that seems to benefit you as a person living in Basra or elsewhere.

Meanwhile, Iraqis have been left to grapple with widespread unemployment and a lack of basic public services.

Over the years, frustration over the siphoning of oil money has seen the southern oil hub of Basra erupt in sporadic protests. In the summer of 2018, people’s anger was compounded by an increase in unemployment, rampant power cuts, water shortages and a sweltering heatwave.

In a symbolic move, protesters chose to gather outside major oilfields, including Rumaila – the same field Kuwait was once accused of stealing from before Hussein invaded.

Just a stone’s throw away from Rumaila and other oilfields, Basra residents come face to face with gas flaring, pipelines and international companies extracting oil on a daily basis.

“You can see Iraq’s wealth coming out of the ground and yet none of that seems to benefit you as a person living in Basra or elsewhere,” Sajad Jiyad, an Iraq analyst and fellow at The Century Foundation think-tank, told Al Jazeera.

Those who live next to the fields have also had to endure the degradation of the environment, including the pervasive smell of crude in the air and harmful oil spills, as well as the drainage of the country’s ancient marshlands.

“Oil is king, oil is above the environment,” hydraulic engineer and environmentalist Azzam Alwash told Al Jazeera. But the unseen damage, he explained, is Iraq’s complete dependence on it.

Agriculture, tourism and the private sector have not featured on the government’s list of priorities.

“With that near-total reliance on energy revenues, the state has neglected agriculture and pastoralism – to the entire country’s detriment,” Peter Schwartzstein, an independent environmental journalist and a non-resident fellow at the Center for Climate and Security, told Al Jazeera.

What began as localised protests in the south in 2018 soon spread north to Nasiriyah, Najaf, Karbala and Baghdad. By October 2019, Iraq’s largest youth-led social uprising in 16 years was in full force.

Young people from all walks of life took to the streets to demand better living standards.

And while the protests have waned since their peak in early 2020, some Iraqis continue to call for change.

In the city of Karbala, Hasanian Ali Mohsen has no intention of giving up. Tasked with shielding protesters from the deadly tear gas canisters employed by Iraq’s security forces, Mohsen has played a key role in the demonstrations.

“I joined this protest to change the government and fight corruption,” he told Al Jazeera. The uprising, said the 35-year-old, is the result of years of corrupt practices among Iraq’s political leadership.

“All oil revenues go to the corrupt,” he added.

Despite the killing of more than 600 demonstrators by security forces and the resignation of then-Prime Minister Adil Abdul Mahdi, the day-to-day lives of Iraq’s youth have not improved – instead, they are expected to deteriorate.

At 36 percent, youth unemployment is more than double national unemployment, according to the World Bank.

And in a country where more than 60 percent of the population is under the age of 25, according to the UN, Iraq watchers say there is likely to be another wave of countrywide demonstrations this year.

Young Iraqis like Mohsen and Mars could be among them. Mars has been unemployed for more than a year after graduating from Baghdad University with a degree in business management.

“Most people have lost hope,” she said. “Others still hang on by a thread.”